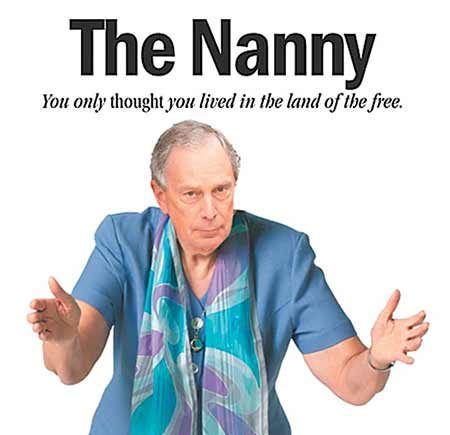 Janet and Russell, you have both articulated with passion your diametrically opposed views about the degree to which the state should regulate our private lives.
Case in point elsewhere: To combat obesity, the mayor of New York proposed the ban of Coca-Cola and other “sodas” in containers bigger than 16 ounces.
Case in point here: The local lobby against alcohol abuse wants a floor price for grog and re-introduction of the banned drinkers’ register.
With your sustained interest in the issues you both have attracted supporters, in Alice Springs and elsewhere, to your respective views about paternalism, the nanny state and the privilege of people making their own decisions.
This has resulted in a sometimes heated, mostly interesting and always revealing debate in the readers’ comment section of this website. Thank you!
I have found in the current New York Review of Books a concept which may provide a compromise between your positions while not requiring either of you to lose face: It’s called “nudging”.
I recommend to you the review, by Cass R Sunstein, of Against Autonomy: Justifying Coercive Paternalism, by Sarah Conly. This, in a nutshell, is what Conly argues.
She quotes neocon hero John Stuart Mill: “As a general rule, government cannot legitimately coerce people if its only goal is to protect people from themselves.
“Mill contended that the only purpose for which power can be rightfully exercised over any member of a civilized community, against his will, is to prevent harm to others.”
Mill is saying people are the best judges of what’s good for them, a belief examined in the book and found to be flawed, and some fascinating reasons are given.
Conly points out that society has determined that it can’t agree with Mill at all times: seatbelts and motorbike helmets are an example.
So where is “coercive paternalism” justified?
Conly argues four areas:-
• The activity that paternalists seek to prevent must genuinely be opposed to people’s long-term ends as judged by people themselves. If people really love collecting comic books, stamps, or license plates, there is no occasion to intervene.
• Coercive measures must be effective rather than futile. Prohibition didn’t work, and officials shouldn’t adopt strategies that fail.
• The benefits must exceed the costs.
• The measure in question must be more effective than the reasonable alternatives. If an educational campaign would have the benefits of a prohibition without the costs, then Conly favours the educational campaign.
And coercion should regulate means, not ends.
So what of the issues about which the government should not be putting down its foot?
This is where “nudging” comes in, steering “citizens in directions that will make their lives go better by their own lights,” says the review.
“For example, cell phones, computers, privacy agreements, mortgages, and rental car contracts come with default rules that specify what happens if people do nothing at all to protect themselves.
“Default rules are a classic nudge, and they matter because doing nothing is exactly what people will often do.
“Default rules are merely one kind of ‘choice architecture,’ a phrase that may refer to the design of grocery stores, for example, so that the fresh vegetables are prominent; the order in which items are listed on a restaurant menu; visible official warnings; public education campaigns; the layout of websites; and a range of other influences on people’s choices. “Such examples suggest that mildly paternalistic approaches can use choice architecture in order to improve outcomes for large numbers of people without forcing anyone to do anything.”
Food for thought?
Erwin Chlanda
Editor, Alice Springs News Online
IMAGE: Detail of a 2012 ConsumerFreedom.com advertisement protesting New York Mayor Michael Bloomberg’s proposed ban on the sale of soft drinks in containers larger than sixteen ounces. He is portrayed in a nanny uniform. The image illustrates the Review article.