An attack on two German tourists in a mobile home in the West MacDonnell Ranges is of the kind described in a German Foreign Office security advisory website (pictured), in its Australia section singling out Alice Springs alone.
Under yesterday’s date the site says: “In Alice Springs, particularly in the hours of darkness, special caution is necessary. Repeatedly there have been reports of attacks on foreign tourists (including armed robberies and rapes). People in mobile homes should only go to camping grounds with guards.”
And prominent tourist industry figure Brendan Heenan, who is at the Adelaide caravan and camping show, describes the attack as “deplorable” and says it makes it hard to promote the NT to potential visitorswhen such alleged crimes are being committed.
Police say a 49-year-old man and a 51-year-old woman were inside their campervan at Ellery Creek Big Hole (pictured below) when they were approached by four “unknown males” at around 8:30pm on Wednesday.
Police describe them as “young males of Aboriginal appearance. The offenders’ vehicle is described as being silver in colour.“
It is alleged the four demanded the couple open the door to the caravan and give them some water. 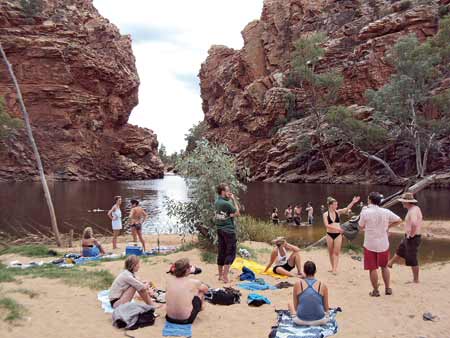 “When the couple declined the alleged offenders proceeded to throw rocks at the campervan, smashing the windows,” says Detective Senior Sergeant Peter Malley.
“The offenders allegedly smashed a window of the driver’s cabin and stole a number of items from inside the campervan.
“The couple gave the men a small amount of money which the offenders took before driving away.”
No arrests have been made as yet.
The Big Hole, some 90 kms from Alice Springs, is The Centre’s biggest waterhole and a major tourist attraction.