As Alice Springs is dreading yet another tumultuous footy weekend, some may look to Lhere Artepe Aboriginal Corporation (LAAC) to help keep in line marauding drunks and out of control youths trashing homes, cars and businesses, anti social behaviour perpetrated disproportionately by Aboriginal people.
The organisation’s purpose is to manage the “rights and interests” of native title holders, as the Native Title Tribunal puts it. And LAAC has frequently claimed that its interests include upholding the image of the native title holders as people of high principles, concerned with maintaining an ancient culture and promoting respect for their traditional lands.
Reality check, please.
New interim chairman Michael Liddle has vowed to reform the organisation, but he says it may take five to 10 years to regain the confidence of the many native title holders who are giving LAAC a wide berth. The damage done by the previous regime headed up by the former CEO and the chairman has been devastating, says Mr Liddle. He is clearly referring to Darryl Pearce and Brian Stirling. (The issues were extensively reported by the Alice Springs News Online – google this site.)
And just as there appeared some light at the end of the tunnel, another controversy is erupting, with prominent Aboriginal man Russell Bray claiming that he is being denied native title holder status by Mr Liddle and fellow LAAC reformer Ian Conway. Mr Liddle says no-one is denying Mr Bray native title holder status: “Mr Bray lacks an understanding of the system and has shown disrespect to elders by talking about land issues when he does not have the authority. He is not followed the process which laid down in the constitution.”
“There are many native title holder families acknowledged by LAAC who are unhappy that their memberships in LAAC are not recognised by ORIC [the Office of the Registrar of Indigenous Corporation] because of the past incompetent administration of LAAC.”
The poisoned arrows shot back and forth are allegations that people “do not belong” to Alice Springs: one side suggests that Mr Bray is from north of the town. Mr Bray says he has evidence that proves the Liddles and the Conways are themselves from areas to the north, and not from the municipality of Alice Springs, which is the subject of the native title determination by Federal Court Judge Howard Olney in 1999, from which arose LAAC.
Mr Bray says his evidence is from a video recording with elder Harold “Wheelchair” Ross, translated by Veronica Dobson, and from a videotaped conversation between himself and Wenten Rabuntja some 30 years ago. The Alice Springs News Online has a copy of Ms Dobson’s transcript and one of the Rabuntja videotape, both supplied by Mr Bray.
The self-congratulatory mood in the Alice Springs courtroom at the conclusion of the Alice Springs native title claim gave no hint of the bitter conflict the decision was about to trigger. The inconclusive nature of the directions set up for a field day the powerbrokers and bullies. For years the court decision has torn asunder the fabric of the Aboriginal society in the town. As one native title holder said to the News: “It was a way of getting us off their backs. Now we are on each other’s backs.” 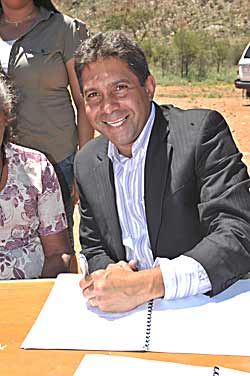