Alice bands head south to play at the Big Day Out 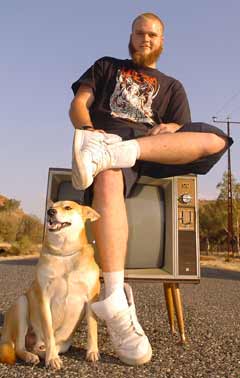 Two Central Australian acts, Stab Capital and hip hop duo Skank Mc & DJ Flim Flam will take to the stage for the biggest performance of their careers at the 2013 Big Day Out music festivals.
The two Alice Springs acts received travel support through the NT Government and will be the only bands from the NT appearing at the Big Day Out festivals, offering a glimpse into central Australian music.
Both are emerging acts, who have only recently released their first EP.
Skank Mc (Hugh Man Winterflood, pictured on his Facebook page) and DJ Flim Flam were selected from musicians participating at the 2012 Music NT’s inTune Conference and Stab Capital were successful through their direct application to the Big Day Out.
Four piece band Stab Capital, who offer a blend of rock and hip hop, were selected to play at the Adelaide Big Day Out on January 25, while Skank MC & DJ Flim Flam (Malcom McDonald), will perform their hip hop act at the Perth Big Day Out on January 28.
They will play alongside international and national acts such as the Red Hot Chilli Peppers, The Killers, Yeah Yeah Yeahs and more, at one of the most successful and long-running rock festivals in the world, attracting massive audiences in Perth, Sydney, Adelaide, Melbourne and the Gold Coast each year.
[Media release by Arts NT.]

Move mower up a notch to reduce grass sunburn

By GEOFF MIERS Christmas is for kicking back and relaxing but not when good rains provide ideal growing conditions: Close that book, switch off Netflix...
Read more
Issue 52