For their mothers ‘none for nine months’ is safest

There is only one cause of foetal alcohol spectrum disorder (FASD) and that is prenatal alcohol exposure, in other words a pregnant mother’s drinking. This can cause brain damage in the unborn child, resulting in learning difficulties, a reduced capacity to remember tasks from day to day, anger management and behavioural issues, impaired speech and muscle coordination, and physical abnormalities in the heart, lung and other organs. The effects can range from mild impairment to serious disability. 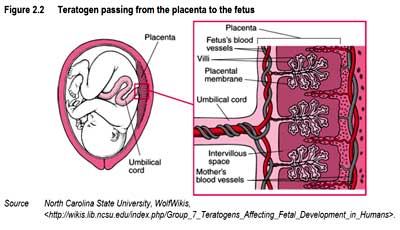 At left: A diagram from the report shows how, when a pregnant woman drinks, the alcohol is passed directly to the fetus through the placenta.

How many Australian children are affected is not known with accuracy. There are estimates of between 0.06 and 0.68 per 1000 live births, though some say this is a significant underestimation. For Indigenous communities, the incidence is thought to be higher, between 2.76 and 4.7 per 1000 births.

These are the barest of facts about the syndrome from the report released yesterday by the House of Representatives Standing Committee on Social Policy and Legal Affairs. The report is titled FASD: The Hidden Harm.

Most of its recommendations concern the Commonwealth. But two involve engaging with the states and territories. Recommendation 8 is that the Commonwealth “raise with the States and Territories the critical importance of strategies to assist Indigenous communities in managing issues of alcohol consumption and to assist community led initiatives to reduce high-risk consumption patterns and the impact of alcohol.” And Recommendation 9 is that the Commonwealth work with the states and territories “to identify and implement effective strategies for pregnant women with alcohol dependence or misuse”.

Both are of particular relevance for the NT Government’s move to liberalise access to alcohol on Indigenous communities if they so choose. The Federal Minister for Indigenous Affairs Jenny Macklin has the power to sign off on local alcohol management plans under Stronger Futures legislation and she has stipulated that the plans must address harm reduction, alongside supply and demand reduction.

The committee’s attention is obviously not confined to Indigenous communities. In regard to the big picture, it says “understanding the use and prevalence of alcohol consumption and its role in Australian society is critical to formulating national FASD prevention measures”.

The report says most people do not drink to excess. “However, short-term consumption of alcohol at harmful levels, or binge drinking, while only occasional, is a prominent feature of Australia’s drinking culture. One in five Australians aged 14 or older drinks at short-term risky or high-risk levels at least once a month.” 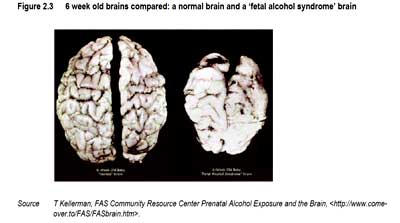 Women of course are not exempt from this and, although the majority of women ” either reduce consumption or abstain during pregnancy” nearly half of all pregnancies are unplanned . Thus many women may consume alcohol during the early weeks of a pregnancy without knowing that they are pregnant. Sadly “following differentiation in the third week of pregnancy, cells undergo rapid development and are highly susceptible to damage from exposure to alcohol at this stage”.

Above: A grim photo from the report, comparing a normal six week old brain (on the left) with one affected by foetal alcohol syndrome.

Lack of awareness of the risk of harm, which is “widespread across the population”, is a significant factor contributing to women continuing to drink during pregnancy. The report notes that “over the last two decades in Australia, there has not been a consistent health message regarding the consumption of alcohol during pregnancy”. Interestingly, the report says women with higher education are more likely to consume alcohol while pregnant and comments: “Where the customary behaviour has been for alcohol to be an accepted part of social life or relaxation, women may not change their daily or social patterns without a clear cultural shift in community attitudes to support them to do so.”

The consistent message to women from health professionals must now be that “not drinking while pregnant is the safest option”, says the report. It sets out a process and a deadline (January 1, 2014) for achieving this single message.

The committee also recommends that the Commonwealth prepare for the mandating of health warning labels on alcoholic beverages, “including a warning label that advises women not to drink when pregnant or when planning a pregnancy”. The process towards this should begin immediately and the labels should be in place again by January 1, 2014.

Facebook
Twitter
Pinterest
WhatsApp
Previous articleIncome management: a lot of pain for little gain?
Next articleLETTER: Water debate 21 years ago – similar in substance, but not in tone