Income management: a lot of pain for little gain?

“A substantial proportion of people who are subject to Compulsory Income Management appear to be competent in managing their finances, are not subject to financial harassment, and live in families where alcohol, drugs and gambling are not seen as major problems.

“Compulsory Income Management is a blanket measure which applies irrespective of the circumstances of the individual, and exemptions are difficult to obtain, particularly for Indigenous people. Thus there appears to be a large number of people subject to Compulsory Income Management who are unlikely to benefit from this measure, and for whom the restrictions of income management can create unnecessary frustrations and challenges.

“Just over a third of Indigenous and around a quarter of non-Indigenous people subject to Compulsory Income Management report that they wish to stay on income management.”

So concludes the just-released first report, Evaluating New Income Management in the Northern Territory.  A second report will follow in 2014 and will include an economic evaluation of the program, answering the question, “Does income management provide value for money by comparison with other interventions?” According to the report’s authors, “FaHCSIA have sought to have this undertaken in the later stages of the evaluation when they consider there will be a better appreciation of the full costs of program implementation as well as the breakdown of costs between establishment and operation.”

The research team of eight was led by Professor Ilan Katz from the Social Policy Research Centre of the University of New South Wales.

The report looked at whether the measure has been implemented in a non-discriminatory manner. It did not find “any active and overt discrimination in the implementation of NIM in the Northern Territory, and there was no evidence produced that Centrelink staff tend to be prejudiced or discriminatory”.

At the same time, “Indigenous people, especially those in NTER areas, were more likely to be positive about aspects of income management than their non-Indigenous counterparts”.

Interestingly, the report says that “there do not appear to be significant gender differences in perceptions of income management, although women are perhaps somewhat more positive about the measure than men”. 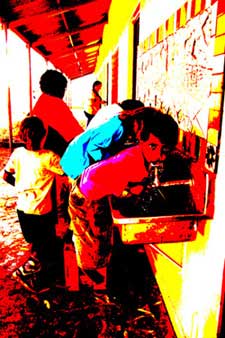 Has it changed behaviours?

The report has had limited success in being able to answer the question of “changes in spending patterns, food and alcohol consumption, school attendance and harassment”, hoped-for outcomes of the measure.

“Data on spending of income managed funds is not available in a form which allows actual patterns of expenditure to be examined. Only data that relates to the proportion of income which is managed is available.

“While in the survey, as noted earlier, a large proportion of Indigenous participants reported higher levels of school attendance in their community since the inception of income management, there is no clear evidence of such a change in attendance to the end of 2011. This finding is in line with the NTER evaluation which found similar positive perceptions but no overall increase in the level of school attendance reported in the administrative data.”

Reducing harassment of individuals for cash was another aim of income management. The report has found some evidence of a reduction but says “the problem remains significant, including for people who have been on income management for an extended period under the NTER”.

Elsewhere, the report says: “From the evidence we have collected it appears that income management seldom in itself motivates people to develop the skills to manage their finances (where these are lacking), obtain paid employment or parent more adequately. There is little evidence that it is bringing about the behavioural change necessary to generate the intended long-term effects. The program logic […] indicates that income management is only one of a range of interventions which are necessary to change behaviour, and the evaluation has found that many of those subject to income management have not accessed appropriate services or interventions which, according to the program logic, are necessary to facilitate longer term change.”

The report also notes that it can be difficult to detect the effect of income management specifically when there have been multiple interventions and areas of improvement. For example, in relation to alcohol consumption, it is “very difficult to disaggregate the effects of income management from the many other initiatives in the Northern Territory, and improved policing of alcohol restrictions was cited by some survey participants as a positive”.

An important finding of the report “at this stage” is that compulsory income management is applied to “a substantial number of people who appear neither to require, nor to gain any benefit from, the program”.

“The data collected from Centrelink staff and those subject to income management reveals that there was a common view that the compulsory application of income management was not necessary and in many cases poorly targeted.”

The Australian Government, which commissioned the report, announced a number of changes to income management today.