Police not waiting to be called to enforce DV orders 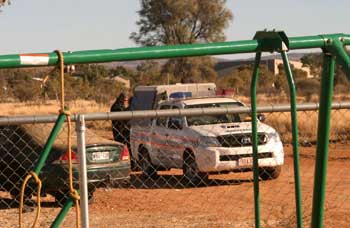 Alice Springs police are not waiting to be called before acting on domestic violence, Detective Superintendent Brent Warren told the Alice Springs Town Council last night. He said domestic violence assaults make up “a huge component of our violent assaults work” and that detectives are working on “a more proactive approach in dealing with victims and offenders”.

At left: Police make an arrest in a town camp. Photo from our archive.

“We’re monitoring people who’ve got domestic violence orders, going out and doing checks without being called. We’re checking on a person: if they’re a high risk victim we’re making sure the offender is not around at the time or otherwise breaking the conditions of that order.”

Supt Warren said the approach has been “very effective” especially when “dovetailed” with the liquor operations of uniformed police, in particular on town camps. He noted the “well identified link” between alcohol and particularly domestic violence assaults. The latest
quarterly crime statistics, released last week, showed a 70% link between alcohol and assaults in Alice Springs and a roughly 60% link between assaults and domestic relationships.

“We’ve had a number of surge operations where we’ve had a combination of uniformed police and detectives going to some our hot spots to do liquor enforcement and at the same time domestic violence enforcement … We’ve done it a number of times now and found it really effective and it seems to be quite well received by people in the town camps.”

Police priorities in Alice are around three core issues, he said – anti-social behavior and liquor-related offending; property crime; and domestic violence related assaults. Uniformed police are doing their anti-social behavior and liquor-related patrolling “with a higher profile presence that everyone has seen and seems to enjoy”, while detectives are taking a “taskforce approach” to unlawful entry and domestic violence assaults.

Their work has been aided by a more rapid turnaround of forensic evidence, with results coming from the fingerprints department in Darwin often within 24 hours. This has allowed his team to go out and quickly target new offenders, following up with getting them on restrictive bail conditions to manage them, including keeping them off the streets.

Uniformed police will remain outside bottleshops

Superintendent Catherine Bennett told council that uniformed police presence outside liquor outlets will continue this summer. She says the officers have the power to question people about their purchases of alcohol and where they intend to drink it. She said this and other aspects of Operation Marathon have worked “extremely well”. Police have received additional resources including a couple more large police vans which they are stationing at hot spots. They also got a couple more motorbikes which allow them to work on restricting consumption of alcohol in hard-to-reach places. A dozen new recruits have already arrived and 12 more are expected in December.

The Summer in Alice operation will be reviewed at the end of December to make sure the strategies are working.

The messages to the public was lock your doors and report all incidents of concern, no matter how minor. “Each little picture” helps police to see “the big picture”, said Supt Bennett. Questioned by Councillor Eli Melky on a recent worrying rock-throwing incident, Supt Bennett said police only learnt about it through the media.

Meanwhile, council is going to talk to the NT Government about installing floodlights at Heavitree Gap, lighting up the cliff-face as a deterrent to rock-throwers. A similar strategy at Anzac Hill has apparently been successful.