“Alice Springs will have a new, modern and fresh looking building within the CBD, adding to the sought after ‘vibrancy’.”

Alice Springs will get “a HUGE industrial shed behind No 12 Railway Terrace, one of the four heritage-listed Railway Cottages” on this street.

These are the two very different views of  a development proposal that will come before the Development Consent Authority on December 12. The applicant is seeking to build a shed for light industrial use at the rear of the block. The block is zoned CB – Central Business. “Light industrial use” is not prohibited in the CB zone but requires approval by the DCA.

Above: Architect’s drawing of the shed as seen from the Stuart Highway. The heritage-listed outdoor dunny will still peak over the fence, from under the verandah roof.

The shed will be almost seven metres high at the rear, abutting (with a gap of 400mm) the fence that faces the Stuart Highway. Its roofline occupies the entire width of the block. It has been “designed to be minimally eye catching, but if spotted and observed, to be visually appealing”, according to the application.

The front of the shed is about six metres high. Although the applicant claims that the shed will be “hidden by screening vegetation”, the architect’s drawings (at right) make it clear that it will be clearly visible beyond the cottage, when facing it from the front, rising to one and a half metres above the peak of the cottage’s pitched roof. There will be a clear view to the full height of the shed approaching the block from the south. The view will be screened by existing tall trees approaching it from the north.

Viewed from the Stuart Highway, the shed will tower over the existing fence. At present this fence is capped by bougainvillea and more will be added, according to the application. Beyond the fence the pitched roof of the old backyard toilet (also heritage listed) can be seen. This will “remain as is and will have protection provided by the proposed ‘verandah’ portion of the structure “, says the application. 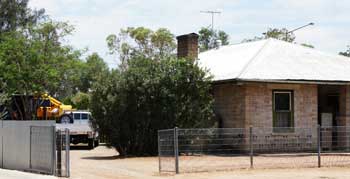 The applicant, Gregory Taylor, says the design of the shed has been modified and its height reduced “to satisfy the Heritage Department”. He also says “the NT Heritage Department” has given its approval for  “the proposed shed to go ahead”. He refers to documentation attached to the proposal but unfortunately this is not available for viewing among the application materials available on the government’s planning notices website.

Above: No 12 Railway Terrace a few days ago. The full height of the proposed shed will be clearly visible from this angle.

Heritage conservation architect Domenico Pecorari, who owns another of the heritage-listed cottages on Railway Terrace, says that “in a town that has already lost too much of its character” the proposal should not be allowed to proceed: “The Railway Cottages are all that has survived to mark the coming of the railway in 1929 and the role that the railhead played in the development of Alice Springs.

“A building of such size and scale will seriously impact upon and diminish the heritage values of the listed place, as well as having a detrimental visual effect upon the public space that is the Stuart Highway. There is little hope of screen planting to soften the visual blow there.

“No-one would accept the erection of a ranger’s maintenance shed amongst the historic buildings at the Telegraph Station, would they?  This case is no different. 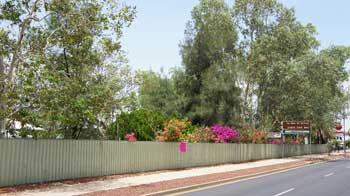 “If this is allowed to go ahead, what kind of an image will we be sending to our interstate and international visitors when they see how poorly we treat our heritage places?  Is this the kind of precedent we want to set for future developers?”

At right: The existing boundary fence along the Stuart Highway. The shed will be over four times its height, says Mr Pecorari.

Mr Pecorari says the lack of a Conservation Management Plan for the Railway Cottages should not be allowed to pave the way for approval of this proposal.  The guidelines that are applicable to the  Alice Springs Heritage Precinct between Bath and Hartley Street are surely relevant, he argues, and they would not permit such a proposal.  He also says the proposal does not reflect “the public’s expectation of the type of development that may be permitted within a heritage listed area”.

There could also be a case for arguing that light industry is incompatible with the residential uses of the Railway Terrace cottages. The primary purpose of the CB zoning, according to the Town Plan, is “to provide for a diversity of activities” but with “a commitment to the separation of incompatible activities”.

The deadline for public comment on the proposed development is this Friday, November 30, 4pm. The relevant documents can be found here.