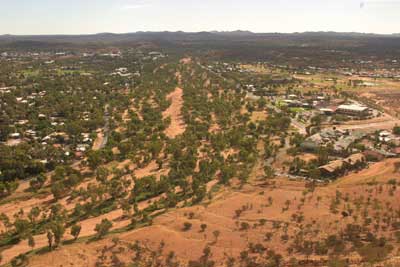 The Town Council has taken the first step towards getting stakeholders in the Todd and Charles Rivers around the table to consider the rivers’ management issues. The Alice Springs News Online recently reported that council looked set the relinquish its role as the rivers’ trustee, when it appeared reluctant to respond to a call by Arid Lands Environment Centre coordinator Jimmy Cocking to take “leadership” in the management of the rivers.

At left: The normally dry bed of the Todd River cuts a green swathe through through the middle of Alice Springs, as seen clearly from the top the range at Heavitree Gap.

CEO Rex Mooney and Mayor Damien Ryan have since revisited the minutes of the Environment Advisory Committee, where Mr Cocking put his motion, and it was clear that the committee wanted council to consider a meeting of stakeholders, says Mr Mooney.

Council has therefore written to the Department of Local Government CEO, John Baskerville, formerly a senior public servant in Alice Springs and a key figure in a joint management committee set up in 2000s to oversee the Todd and Charles.

“This is one way of getting advice back to council on whether there is interest in reviving such a committee from the government’s point of view,” says Mr Mooney. “The government is the appropriate body to be facilitator, and council could be a participant.”

The past committee did not have project officer, nor a budget, which Mr Mooney says were “some of the shortfalls of the committee at the time”.

The News asked whether this move has implications for council’s trusteeship of the river.

“I wouldn’t think so because that trusteeship was in place when the former committee existed,” says Mr Mooney.

As recently reported, council sees its trustee responsibilities in the river as limited to maintaining fire breaks, keeping weeds down (not eradicating them) and managing litter, although it is not adverse to discussing a joint holistic approach.