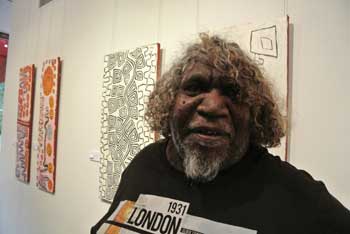 Forty years ago to the day yesterday Papunya Tula Artists was registered as a company in the Northern Territory. Its cultural triumph over those decades barely needs restating. Right now master works from its founding years are the subject of a major exhibition at the Musee du Quai Branly in Paris. Two of its artists, Walimpirrgna Tjapaltjarri and the late Doreen Reid Nakamarra, were featured in Documenta at Kassel in Germany earlier this year. Some of that brilliance is also there in the anniversary show that opened last night at the company’s elegant gallery in downtown Alice Springs.

Take a look at the dazzling (and technically outstanding) work by Yukultji Napangati hanging on the rear wall of the gallery. As you approach it on the wall to your left, there are impressive works by Walimpirrgna and Bobby West in this same vein of rigorous abstraction. A fine painting by Walangkura Napanangka pulsates from the wall above the sales desk. Work by Johnny Yungut is like a beating heart on the long left hand wall as you enter. Works by Kawayi Nampitjinpa (featuring on the invitation) book end with charming contrast this part of the display.

Dotted throughout the show, no doubt in acknowledgment of their contribution to the long-term success of the company, are works by past stars who have passed away – Makinti Napanangka, Martin Tjampitjinpa, Doreen Reid.

Indeed memory of the past hung in the air last night. Or perhaps it was more the question of what does the future hold. Some of that depends on very practical matters. The impact of the economic downturn has meant some adjustment, manager Paul Sweeney told the crowd, but the company remains “rock solid”. He didn’t put a dollar figure on it and the sales desk last night was certainly quiet compared to the heyday of queues of customers reaching to the door. But the evidence cited was in the ability of the company to support its extensive investments in health services to its home communities of Kintore and Kiwirrkurra. 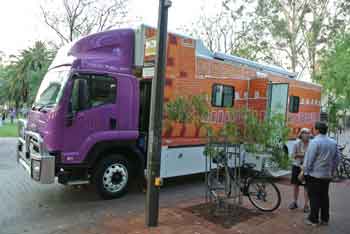 The purple mobile dialysis truck (at right) was parked out the front of the gallery in stark reminder. Sarah Brown, the hard-working nurse who heads up the dialysis organisation (Western Desert Nganampa Walytja Palyantjaku Tjutaku Aboriginal Corp Inc. founded with the help of Papunya Tula Artists, which remains a key supporter), listed its achievements. She brought it home for art-lovers when she spoke of the fine artist Patrick Tjungurrayi, now dialysis dependent, recently being able to spend two weeks at home thanks to the Purple Truck. But the need is on-going and expanding and Ms Brown appealed to the audience for ideas and inspiration on how to further support the service. Mr Sweeney also paid tribute to staff member Ben Danks for his tireless advocacy to governments in trying to get better aged care services at Kintore and Kiwirrkurra.

Strangely, political and community leaders from Alice Springs were absent from last night’s celebration. What other local company – let alone one that is a shining beacon of Aboriginal achievement – would get to celebrate their 40th anniversary without local luminaries present to show their support? This is a sad reflection of the disconnect that can occur in Alice Springs.

Opposition Leader Lia Finocchiaro says the Territory has lost one of its greatest champions with the death of former Deputy Chief Minister, Treasurer and...
Read more
Issue 46

Youth Hub out, Empowered Futures in

By KIERAN FINNANE The Town Council is changing the focus of its plans for young people. The much-spoken of Youth Hub concept has been dumped...
Read more
Issue 46

By ERWIN CHLANDA "The Crown" missed the punchline and got the weather wrong when it showed Prince Charles, Princess Di and little William disembarking in...
Read more