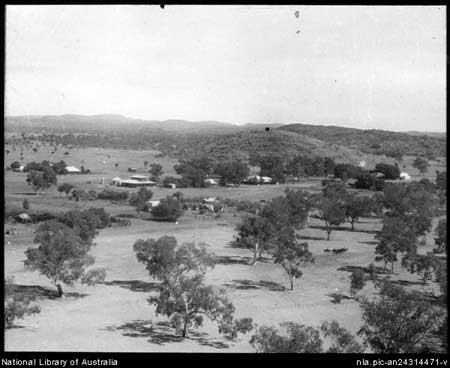 The river bed of the Todd is more stable than many assume. These photos were taken from exactly the same vantage point on Meyers Hill (originally called Nannygoat Hill). The first was by John Flynn in 1926; the brand new hospital Adelaide House is clearly visible left of centre of the photograph. I took the second this year.

There are two prominent river gums in the bed of the Todd River at the lower left of Flynn’s photo. These trees still exist next to the Stott Terrace Bridge, as seen in my photo. The tree in the middle of the riverbed has suffered extensively from dieback, a widespread disease problem which reached its peak in the 1980s, but in the last decade this tree has staged a remarkable recovery. This is typical of many of the rivergums in the Todd and other river systems in Central Australia. 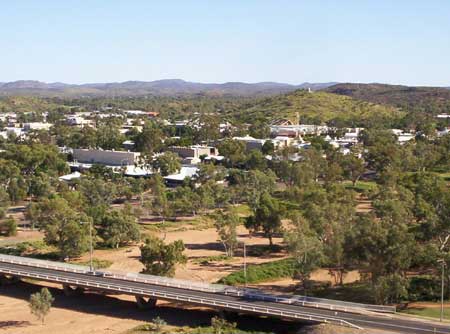 In my photo there is a prominent “island” covered in buffel grass on the eastern side of the riverbed. This island is also observable in Flynn’s photograph, although it was devoid of vegetation at the time. It therefore cannot be argued this island of sediment has been caused by the presence of exotic grasses – rather, the grasses have taken advantage of the relative stability of this site upon which to establish and thrive.

As an afternote of interest, the name “Nannygoat Hill” but the name would be of the same vintage as Billygoat Hill. It was during the early part of last century that settlers relied heavily on flocks of goats for milk and meat. It’s for this reason that much of the landscape around Stuart (as it was then) was heavily denuded of vegetation. Goats were kept at the base of Nannygoat Hill in the area that is now the Olive Pink Botanic Garden – there is still an old Dead Finish shrub at the rear of the visitor centre which displays a clear browse line in the canopy from the time when goats must have sheltered beneath it.

RELATED READING: Removing sand from the Todd makes no sense as a flood mitigation measure – letter and comments.

By ERWIN CHLANDA Compared to the yet again increasing number of COVID-related restrictions interstate, the New Year's Eve police message in The Centre could be...
Read more
Issue 50

Walking, certainly not running to get Rock approval

By ERWIN CHLANDA The application contains 17,184 words and has been under negotiation for five years. It is still not approved but the “project will...
Read more