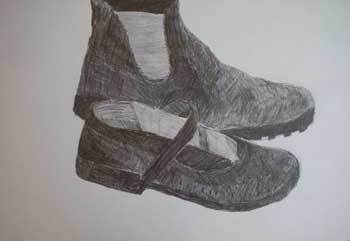 The shoes – a man’s boot, a woman’s maryjane – are as if left at the entrance to the artist’s space. ‘Inside’ we encounter the drawn traces of everyday life, implements lying in wait for guidance by the human hand. It’s tempting to take a cue from the shoes and see the objects as a gendered array – the tools and screws are his, the buttons and graters are hers – and to read this wall as a kind of homage to the shared life of two people who use their hands a lot, who make things.

But that reading doesn’t take account of the way in which most of the objects are divorced from a context, including life-like scale, and from anything other than an aesthetic relationship to one another. Nor does it take account of the tension provided by the blank sheet of paper and its perennial question – how to compose these drawn marks (which we read as depictions of objects) within its frame. 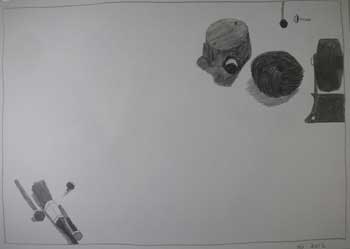 The tension comes into full force in some of the larger drawings, where it’s almost as if the blank sheet has pushed the objects to its perimeter (as in #37, Shed objects). In others they are invited in, arranged conversationally (for example #41, Jumper leads).

With all these drawings, large and small, the artist, Neridah Stockley, allows her enquiring eye to alight on what is around her – in the studio, the shed, the kitchen – and to lead the pencil in her discerning hand towards the essential line, form, pattern to be found there.

The same approach is used in her landscape drawings and drypoints. Just how far does the mark-making have to go to get to its ‘destination’? This seems to be the question she’s pursuing. Are we ‘there’ yet, in her Ross River drawings, with the barest of lines or does it take a greater massing in? We can have it both ways – the beauty of the artist’s work. The N’Dhala Gorge drypoints speak to us of the gorge’s steep walls looming above – the experience of this form – whether rendered as a dark velvety mass, or in the greater detail yielded by contrasting tonal areas. 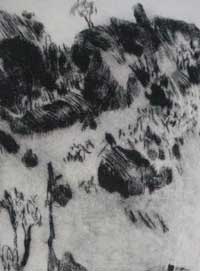 We get to an almost complete reduction with the drypoint, Paddock, yet still it has a resonance – the bleached open field.

Stockley has been drawing and painting since childhood. Her father was a draughtsman and engineer and it’s not hard to imagine that her clear sense of structure owes something to him. She credits two teachers with a strong and positive influence on her work. Her high school art teacher, Penny Brook, lay down the challenge by asking, “Where are the women in Australian art?” And at East Sydney Tech’s National Art School, Rex Dupain (son of Max) recognised her strength as a plein air painter and encouraged her to pursue it when it was hardly fashionable to do so.

But Stockley’s not particularly susceptible to fashion. She came to Central Australia in 2001 and chooses to remain: “It doesn’t get any better than this,” she says, speaking as an artist. From the end of 2004, she has devoted four to five days a week to her art. She had her first solo exhibition at Araluen in 2005 and the current show there is her tenth, with many of the intervening solos held outside of the NT. 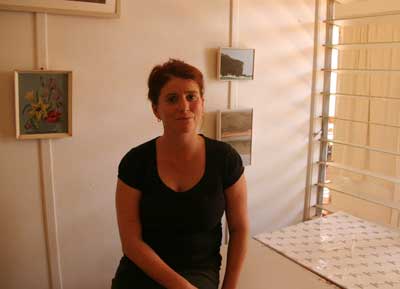 In 2008 she was the NT winner of the Qantas Encouragement of Australian Contemporary Art Award and used it ($20,000 cash and $10,000 worth of airfares) to go to the Pilbara, spending five weeks around Tom Price, and then another five in a landscape of incredible contrast, on King Island. While she loves The Centre, she says it’s healthy to “go out”. She had also experienced a moment of revelation, she recalls, when she saw a photo of the great Australian painter Fred Williams with his yellow Ford Falcon and easel at Tom Price: “That’s it, that’s how you do it.”

She threw herself into working plein air with a passion and says she will always work like this – “that’s where you get your information from”.  But recently she has been drawing more in the landscape and painting in the studio. That is not to say that the drawings are necessarily a preliminary form but sometimes they help find “a way in”. “I believe in drawing”, she says, “and as an artist I don’t want to just keep making ‘nice paintings’, not just that.”

Works on Paper shows at the Araluen Arts Centre till 17 February, 2013.

Photo of Neridah Stockley in her studio by Kieran Finnane.