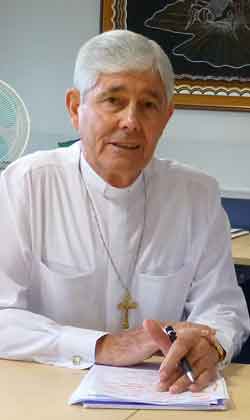 Two school principals from  Indigenous Catholic Community Schools were killed yesterday morning in a triple fatality on Tiger Brennan Drive in Darwin.
One was Greg Crowe, principal of the Ltyentye Apurte Catholic School in Santa Teresa in Central Australia.  He was aged 72.
The other was the principal of Murrupurtiyanuwu Catholic Primary School in Wurrumiyanga on Bathurst Island, aged 50.  She had been principal for nearly 23 years. He name was not released for cultural reasons.
Bishop Eugene Hurley (pictured) said: “We are deeply saddened by this tragic accident where the lives of three people were taken.  Two were principals who we knew and loved well and the third was a taxi driver whose family I don’t know.
“The community of Wurrumiyanga has lost a school principal and a leader in her own community.
“Santa Teresa has lost a principal and a much-loved member of the community. He has worked as principal for the past five years.”
– Media Release from the Catholic Education Office.