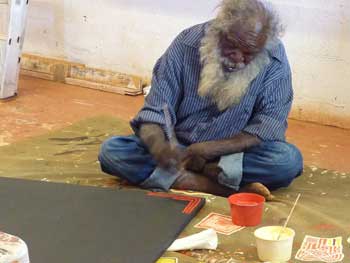 In a first for Papunya Tula Artists, Ronnie Tjampitjinpa, one of the company’s most famous living painters, has agreed to license some of his art to be used in a commercial product. Two of his existing paintings, Rain Making At Malparingya and Echidna Dreaming At Tjungaringya, have been adapted for use on iPhone covers by a Melbourne-based company called Cygnett.

Others artists being used for the covers include the Tats Cru, “legends” in the New York City street art scene and Nathan Jurevicius, an Australian US-based graphic novelist, illustrator and now animator. So Tjampitjinpa is in very trendy company.

Cygnett were researching the broad field of Australian Indigenous art before they decided on Tjampitjinpa. His “extremely bold and visually striking” work was immediately appealing, “contemporary yet rich with the heritage of the Central and Western Desert”: “It just worked.” 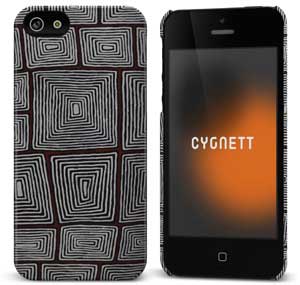 The story behind the art is promoted on the Cygnett website, with video showing Pintupi country, some historic images of Tjampitjinpa and of him today, painting at Kintore in the Papunya Tula studio. Text explains that the Rain Making design (at right) depicts body paint designs associated with rain making ceremonies at the site of Malparingya, slightly south east of Lake Mackay. The Echidna Dreaming design (top) is associated with Tingari ceremonies relating to the Echidna Dreaming at the claypan and rockhole site of Tjungaringya, south of Lake Mackay.

The license negotiated with Tjampitjinpa allows the work to be used in other accessories and a Cygnett spokesperson says a specific commission is “part of our future plans”.

Paul Sweeney, manager of Papunya Tula Artists, interviewed on the Cygnett video, describes Tjampitjinpa as a leader in his community and a “trailblazer” in the Western Desert art movement, pioneering a “progressive” far more abstract style of painting within the movement, which became increasingly sought after by collectors in the mid- to late ’80s.

Mr Sweeney told the Alice Springs News Online that Papunya Tula Artists was happy to facilitate Cygnett’s negotiations with Tjampitjinpa, but it was the artist’s decision entirely and all income from the deal goes to him.

The News asked if there is a downside to licensing? Could it lessen the prestige of an artist’s work to see it on everyday objects like phone covers?

Mr Sweeney doesn’t think so, unless the product was poor quality, or had “some kind of bad commercial reputation or was simply inappropriate for whatever reason”: “We had a close look at Cygnett and what they do before we signed off so were pretty careful about what we were getting in to. And of course Ronnie also played a part in the decision-making.”

The phone covers should be available at the 40th Anniversary Exhibition, opening at the Papunya Tula Gallery on Todd Mall on November 16.