Back to the drawing board on pedestrian crossings in Alice CBD 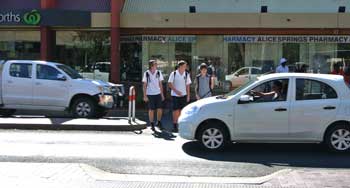 Council will not be proceeding with wombat crossings between the Post Office, Yeperenye and Coles – nor any new crossings at all – pending further consideration of past reports and a new traffic study in the CBD.

At left: Probably the CBD’s busiest crossing, on Hartley Street in front of the Yeperenye shopping centre.

The issue had been discussed at length by the previous council, with the wombat crossings (the kind of raised crossing that has been installed on Gregory Terrace, between Kmart and Coles) finally agreed to. At last night’s meeting the Technical Services department was seeking council’s permission to proceed.

Councillor Steve Brown said he had received  a lot of feedback from residents on the issue, all of it negative. The crossings would unnecessarily restrict traffic and far from improving safety, may increase the hazard for pedestrians. Cr Eli Melky agreed, with “possible road rage” among the negative consequences.

Cr Liz Martin, while happy to listen to both sides of the debate, pointed out that her mother had been hit by a car under the present conditions.

Cr Chansey Paech spoke in favour of the crossings, as a way of council being seen to promote a healthy lifestyle, encouraging visitors to the CBD to walk between trading centres (Todd Mall, Yeperenye, Coles). He said he had received positive comment on the proposed crossings from people with little kids.

At right: The wombat crossing on Gregory terrace, between Coles and Kmart.

Cr Dave Douglas wanted council to go back to the drawing board and consider installing lights at the crossings.

A resident had spoken from the public gallery, suggesting speed humps rather than crossings, but Cr Jade Kudrenko didn’t think people would like speed humps throughout the CBD. She thought council might want to eventually look at a one-way loop for traffic through the CBD. Meanwhile, wombat crossings would be safer, she said.