Namatjira descendants look to their future 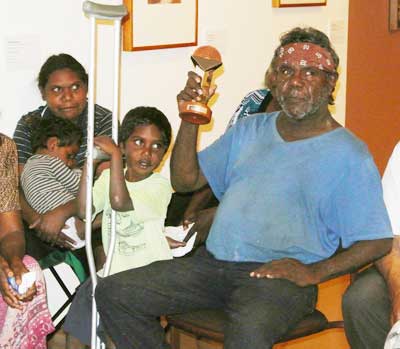 Many Hands Art Centre going through a restructure after royalties cease

It was a gratifying moment: a Helpmann Award trophy, won by the production Namatjira, which told the story of their illustrious ancestor, was put into the hands of Kevin Namatjira and family yesterday. The national awards recognise excellence in live performance and  Namatjira won the Best Regional Touring Production category, against competition from the likes of Bell Shakespeare. The awards were announced at a ceremony on September 24 in the Sydney Opera House.

But there was something further on the artists’ minds yesterday: what will be the future of Ngurratjuta Iltja Ntjarra, also known as the Many Hands Art Centre? The art centre is going through a restructure after royalties from oil and gas mining operations on the artists’ country  ceased to flow. The royalties have funded the art centre for the last nine years. While it is still trading, it has down-sized and for the last three months artists have not been able to paint in its studio.

Their art is still highly sought after, if their interstate exhibitions are any guide: they are currently showing at Alcaston in Melbourne, CCAE in Darwin, the university gallery in Newcastle and soon at Tali Gallery in Sydney and Nyinka Nyunyu in Tennant Creek. An annual watercolour exhibition will also continue to be a feature at Alice’s Talapi Gallery.  In fact, in this transition period commercially the art centre is doing quite well, said its only current employee Iris Bendor, who attended yesterday’s ceremony. 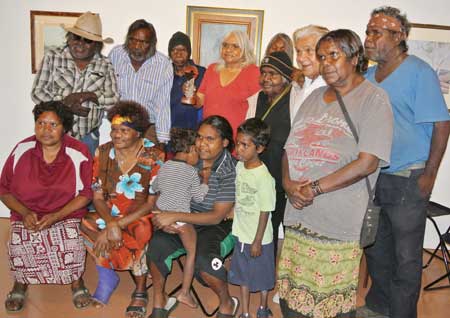 Artists like Kevin Namatjira, Ivy Pareroultja and Lenie Namatjira used to be regulars at the studio, she explained, and would produce up to three paintings a week, yet the art centre could not sell as many. So there’s a lot of stock and with Ms Bendor solely focussed on promoting it, there is a similar or even higher revenue flowing to individual artists.

But for the artists it’s about more than money. Yesterday Kevin Wirri expressed his frustration. He wants to “work, work, work” making paintings, he said. He has his artist materials at home in Abbott’s Camp but finds he can’t work there. His son, Elton, something of a star in the Namatjira production and one of the most sought after of the Hermannsburg School artists, is not painting either, said Mr Wirri.

There are significant plans afoot but they’re still under wraps. After the awards ceremony artists were meeting with Ms Bendor to be updated. Artist Selma Coulthard said that to date they had not been given any information and she was keen to hear the latest.

Some of the ladies are painting at home, she said, and sometimes they go to the mall to sell their work direct but they “miss being together to paint. We used to go two days a week. It was something everyone looked forward to. When it closed we were sorry”.

Cecily Hardy from Big hART, who presented the trophy to Kevin Namatjira, was to attend the meeting with artists. She said Big hART has been “working fervently behind the scenes” to ensure that there are  “positive outcomes” for the artists “moving into next year and beyond”.

The focus of Big hART is social change and the company’s partnership with the Namatjira family was “the most important” part of the project which began in 2009, Ms Hardy said. Its staging has been accompanied by exhibitions of their work and watercolour workshops led by the artists where interested people had a chance to have direct contact. These aspects of the project will be continued in its overseas tour, said Ms Hardy. Negotiations for venues and dates are well advanced in both Germany and the UK.

In Australia there were 130 performances – including two packed houses in Alice – of the production across six states and territories since it premiered in 2010, with two or more members of the Namatjira family involved at all times.

Below: Namatjira country, the huge chalk drawing by members of the family that was the backdrop to the staging of the Big hART production. This photo from the Alice News archive was taken at the presentation of the work-in-progress at Araluen in Alice Springs in 2010.