Last Saturday people of the Ba’hai faith were celebrating the birth of their prophet, known as the Bab (meaning ‘gate’). In Alice Springs local Ba’hai chose to share their holy day with children, any children. They set up at a neighbourhood park in Larapinta and offered a morning of activities and companionship.

They letter-boxed in the nearby streets and put a notice in the Larapinta Primary School newsletter. Some of their own children came along, like 10-year-old Oriwa Kaiwahia-Ponga, who said she wanted to help her uncle, Santana Ponga: “It was his idea”. Her little sister Serenity, six years, might not have put it like that but she was an animated presence everywhere I looked.

I chatted to Toby Gatenby, six years, and Jamie Heta, nine. They go to school at Larapinta but it was their first time at the park. They made a start by putting their hand-prints on a banner, reading “Unity in diversity”.  “They’re cousins!” piped up Serenity. “How do you know?” I asked. “I heard them say it,” she replied, quick as a flash. 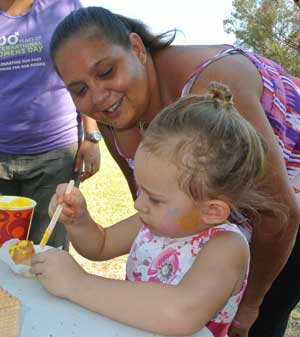 Uncle Santana only recently moved into the area. He told me he’d been involved in children’s events in other parts of Alice but hadn’t seen anyone do a community event in Larapinta. “There’s a bit of sport at the oval and that’s about it,” he said. “So part of this event is about community development.”

At a table in the shade of a tree, there was cupcake decorating. Janelle Crosbie (at right) was there with her little children, Jayden and Da’nisia, as well as her cousin Sheena Baird. They live just up the road from the park. Janelle’s partner is of the Ba’hai faith, Janelle and Sheena are “still learning”: “This is the first public event I’ve helped out at. It’s nice and we should have a lot more. I love kids and love to get involved with kids’ events.”

Renee Harrison, eight years old, lives across the road. She doesn’t play in the park often but her mum saw the notice in the letterbox and brought her over: “It’s nice to have something to do here,” said Renee.

Sisters Jemma and Charlotte Hardy, nine and six years, arrived with their dad. They’d heard about it through the school newsletter. Jemma put her hand-print on the banner and was asked to choose “a virtue” to put alongside it. “Confidence,” suggested Oriwa, but Jemma preferred “kindness”. 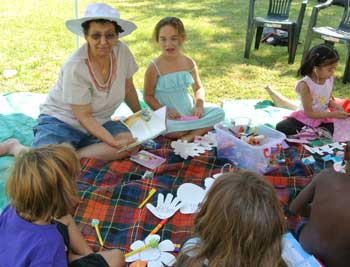 Under a shade shelter some children and adults were making things with card and coloured pens, while Vicky Yaganegi (at left, Serenity by her side) was reading stories. Santana had explained that the stories were not  religious but had a moral content, so I was interested to see Vicky reading Blinky Bill. What is the interest of that story from a Ba’hai point of view, I asked her later.

“We believe it’s lovely for children to learn through the arts and stories and we learn from the children too,” she said. As for Blinky Bill, “the love of animals in children’s hearts is very important – that they understand them, don’t hurt them, are kind to them”.

A group of local children, two girls, 11 and 10, and a boy proudly “eight turning nine”, had been going past when “Miss Pinto called out”. That’s Michelle Pinto who teaches at Larapinta and has been involved with the Ba’hai for about four years. Soon the 11-year-old was helping do face-painting while her sister and brother joined in the activities. Before they went home they had some suggestions to make for next time, including a water fight – “Well, it’s the weather for it,” said Michelle. “Crazy hair” was another idea, involving hairspray. The 11-year-old was keen to come and lend a hand with that.

There will be a next time, in about a month. “This looks like a good focal point,” said Santana. “Quite a few kids walked past.” 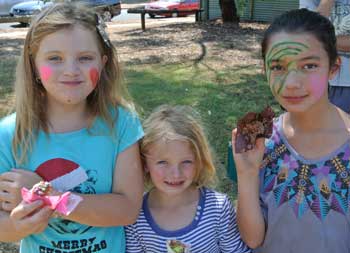 This isn’t the only kind of activity the Ba’hai organise for children. They also run children’s classes and Junior Youth Groups for 12 to 15-year-olds, described by one youth present as “an empowerment program”. It’s based on the idea of service: it might be collecting and recycling cans, helping the elderly wash their cars or clean their gutters, visiting at the Old Timers, or at childcare centres.

At right: Sisters Jemma and Charlotte Hardy with Oriwa Kaiwahia-Ponga and their decorated cupcakes.

“Young people get a buzz out of giving a hand,” said Santana. “It’s about contributing, connecting, supporting. We’re looking at starting a youth group in Larapinta by working with local parents.”

The Ba’hai  “acknowledge all faiths”, Santana explained. They believe their prophet, the Bab, is the most recent manifestation of God but acknowledge Jesus and Mohammed as also manifestations of God.

“Our faith actually does not allow us to proselytise”, said Michelle. “We believe in independent investigation and support people to do that.”

There’s no ‘church’ in the sense of a building. Their devotions take place in their homes or in community places such as the Town Library.

On Saturday evening the faithful were going to gather for a celebration – a feast, alcohol-free. Santana handed me an invitation, showing two white roses.

“In the garden of thy heart plant naught but the rose of love,” smiled Michelle. 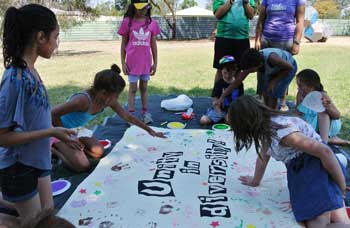