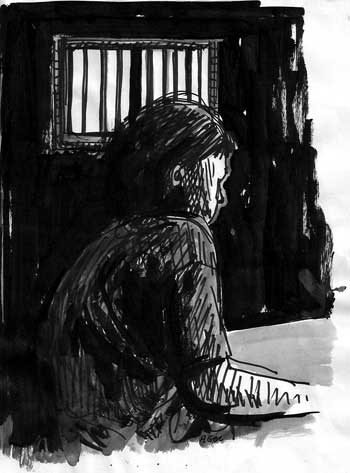 
Dangerous prisoners can already be detained indefinitely if the Supreme Court so decides, so why is the Territory’s new Attorney-General, John Elferink, wanting to add legislation in this area? Mr Elferink introduced the Dangerous Prisoners (Sexual Offenders) Restraint Bill while in Opposition and recently announced his intention to reintroduce it.

It was among the matters of concern discussed with him by President of the Criminal Lawyers Association, Russell Goldflam, in their first meeting since the election last week: “It’s a case of ‘If it ain’t broke, don’t fix it’,” says Mr Goldflam.

Indefinite sentencing of violent offenders, including serious sexual offenders, is provided for under the Sentencing Act, in force since 1996. Mr Goldflam says the provision has been used in a tiny number of cases – perhaps two or three. He is not aware of cases that have fallen through the cracks although he says he would not necessarily be aware of them.

The current provision was controversial when it was introduced, as were similar provisions in most jurisdictions in Australia. They have since been the subject of appeals and examined in detail by superior courts. The issues are now settled, says Mr Goldflam – the laws are deemed constitutional, valid and have a place in Australian justice. So why add a new scheme that would parallel the existing one, except for a couple of critical differences – the involvement of a politician in initiating the process, and it “unfairly” coming at the end of time served, rather than at sentencing, as it does currently.

Mr Elferink says he – or possibly the Minister for Corrections – would be acting on advice from Corrections about what they deemed to be the high risk of a prisoner re-offending. Their advice would be based on the prisoner’s behaviour while incarcerated, something the court can’t know at sentencing – perhaps a prisoner’s admission of intent or a psychiatrist’s report. The final decision would remain with the court and it would not be a second sentence, but a form of restraint. A decision to continue detention or for the prisoner ‘s release to be supervised would also require a “very high threshold”  – the court would have to conclude that there was a “high likelihood” of the prisoner re-offending.

At present, says Mr Goldflam (pictured at right), following a conviction for a violent offence a judge or prosecutor can flag that an application to impose an indefinite sentence will be made: “It’s in the hands of highly experienced officers of the court who understand the sentencing process.”

In contrast, a politician, even one who is a qualified lawyer as is Mr Elferink, is necessarily sensitive to public opinion and might act in response to it: “The whole point of having a Director of Public Prosecutions is to keep the process independent of political intrusion,” says Mr Goldflam.

However, Mr Elferink says he, as a Minister and member of the Executive, is a lot more accountable to the community and that is appropriate: “There’s nothing sinister in this. A matter is brought to the Minister’s attention and it is then referred to the courts.”

Mr Goldflam has put to Mr Elferink that it would be better to look at how existing legislation could be amended rather than introducing a parallel process. For example, the definition of violent offenders covered by the existing provision could be extended. Discussions could also be had with the DPP about the guidelines around initiating applications under the current provisions.

The Alice Springs News Online asked Mr Elferink why his Bill is concerned with sexual offenders only. He says rape and sexual offences especially against children are particularly abhorrent in the public’s mind. He based his Bill on Queensland legislation that has been upheld by the High Court. He says NSW is currently wrestling with extending similar legislation to violent offenders and he will be watching their experience closely.

He says that no one incident has motivated his determination to act in this area but a recent case dealt with by the Supreme Court in Alice Springs, where a Tennant Creek man, convicted of two previous sexual offences on children under 16  and having served time was released and then raped a three year old child, was the type of case his proposed legislation is concerned with.

Mr Goldflam described his discussion with Mr Elferink as “affable, constructive and open” and particularly welcomed the Attorney-General’s legal understanding. He also raised with him the association’s concern about mandatory sentencing for assaults and the mandatory rehabilitation of problem drunks. There were also some points of agreement, in areas of reform that are “not political” but are important for the operation of the law. These included the passage of the Uniform Evidence Act and the implementation of the Youth Justice Strategy developed for the Labor Government by former Country Liberal MLA, Jodeen Carney.

By GEOFF MIERS Cucumbers are easy to grow and by planting now you are likely to be rewarded with a large continuous crop of a...
Read more
Issue 37

No need for Parrtjima hype: let the audience decide