Central Desert Shire lost 6.6% of its population in the five years from 2006, according to the 2011 Census. And this was with a gain of 11.7% in its non-Indigenous population. Its Indigenous population fell by 11.1%. This was one of the standout snapshots from a presentation by the Australian Bureau of Statistics to the Alice Springs Town Council last night.

Central Desert Shire stretches in an arc north of Alice, from the WA border in the west to the Queensland border in the east and deep into the Tanami. 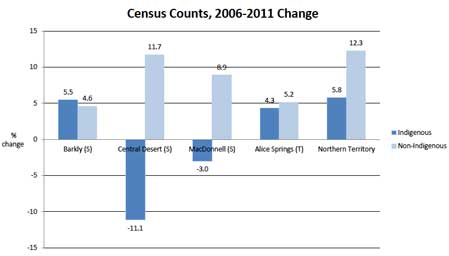 MacDonnell Shire, which takes in a vast swathe of land largely to the south of Alice, again stretching from border to border, lost only .5% of its population, although with a drop of 3% in its Indigenous population, while gaining 8.9% in non-Indignous residents.

Barkly Shire, which takes in Tennant Creek, gained 2.2%, with a 5.5% rise in its Indigenous residents and 4.6 in its non-Indigneous population.

The Australian Indigenous population grew by 21.38% in the intercensal period, although Stephen Collett from the ABS, who presented the information to council, said a significant part of this growth was down to more people identifying as Indigenous since the last count.

The NT continues to have a significantly younger population than Australia as a whole, with significantly more children and young people, and significantly fewer older people, with the difference becoming extreme in the 65 years plus age group. There also start to be fewer women in the NT from the 45-49 years age group onwards. The fewer males measure does not kick in until the 55-59 years age group. 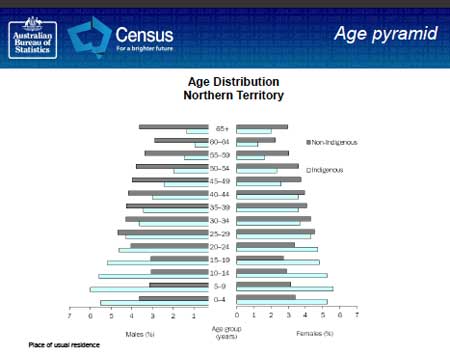 Gains are being made in Indigenous education in Alice Springs. The count of Indigenous persons aged 15 and over, no longer attending primary or secondary school, showed that 15.5% of them had completed Year 12 or equivalent in the 2011 Census, compared to 11.8% in 2006. The percentages for having completed Year 10 or equivalent were 18.8% (2011) and 18.5% (2006). And the graph reverses where you would hope it would, with fewer people reporting Year 9 completed as their highest attainment, Year 8 or below or not having been to school at all.

Alice has gained dwellings, in line with the Australian figure, and its household size average, 2.6, is the same as Australia’s. Household sizes in the surrounding shires are significantly higher (CDS, 4.2; MacDonnell, 4.0), though they have decreased slightly since 2006. Indigenous household sizes are higher than non-Indigenous (3.3 in Alice compared to 2.5; 5.2 in CDS; 4.7 in MacDonnell).

Median weekly rent in Alice Springs ($300) is significantly dearer than the Territory average ($224) and somewhat dearer than the Australian average ($285). These figures are inclusive of public housing rents. The median rents in the surrounding shires are dramatically lower – $25 in MacDonnell, $20 in CDS.