Bushfires an even bigger heartache when they are started by fools

ABOVE: The Finke River (foreground) stopped the bushfire just short of a popular bush camp, and the Glen Helen Resort. Mount Sonder is in the background, charred bushland in the middle ground. CENTRE LEFT: Aftermath of one of the many places where fires were started on the road to Glen Helen. CENTRE RIGHT: A curry wattle re-grows after a bushfire in the MacDonnell Ranges, near Ormiston.

The big country we live in turns into a monster when it burns, thumbing its nose at our feeble efforts to regain the upper hand.
It’s the more agonising when the cause is human stupidity, carelessness or malice, as appears to have been the case a few days ago when part of the West MacDonnell National park, our greatest tourism asset, was turned into cinder.
An area of about 40 square kilometers was burned.
One blaze was started by the roadside near Redbank Gorge. Another, ignited in dozens of spots for some 30 kilometers on the Glen Helen to Alice Springs road, was lit by s

parks from a car driven on its rims.
The Redbank fire burned eastward towards Ormiston Gorge camp ground, which had to be evacuated, but burned itself out in an area targeted in an earlier prescribed burn before reaching the camp ground.
It also burned towards the Glen Helen Resort, stopped right on its doorstep by the mighty Finke River and parks staff.
They were unable to do much about the blaze on the road to Alice Springs, however: inaccessible country makes fire fighting difficult and blustery winds caused havoc to staff trying to control the fire.
It was a bad omen after last year’s devastating fires which consumed an estimated 45% of Central Australia.
Most fires are caused by humans. Charred areas are lining mostly the roads leading to outlying communities.
As summer approaches, you can monitor this unfolding tragedy on the bush fires map which is updated every few hours from satellite images.
Last year there was much discussion about the need for police forensic investigations to find and punish the firebugs – but even that is a curly issue.
The ownership of the parks has now been transferred to Aborigines. The parks, for a substantial fee, are leased back to the government for the use and enjoyment by the entire community. The public purse is also responsible for the management and maintenance. 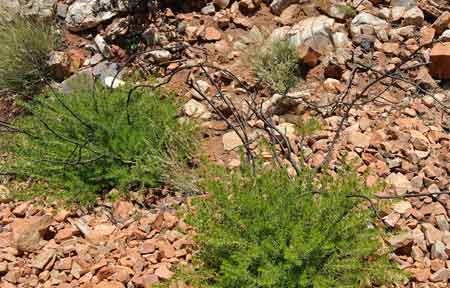 So can the government get tough on fire lighters? Not in some circumstances, it appears.
The Territory Parks and Wildlife Conservation Act says “nothing in or under this Act limits the right of Aboriginals who have traditionally used an area of land or water from continuing to use that area in accordance with Aboriginal tradition for hunting, food gathering (otherwise than for the purpose of sale) and for ceremonial and religious purposes.
“The operation and effect of this Act is subject to the Native Title Act 1993 of the Commonwealth.”
Driving a car on its rims could hardly be regarded as a traditional Aboriginal activity, but having a meal out bush by a campfire? It’s clearly enough for authorities to limit their response to hand wringing.
Parks and Wildlife Deputy Chief Ranger Gary Weir fought many fires in the 2011 inferno.
He and other rangers were burning back during one of the fires from the Stuart Highway south of Alice Springs.
They had miscalculated by a few minutes and the flames jumped the road, literally over their heads.
They fell back to the railway line but the fire overtook them again. They moved further east and finally managed to stop the blaze at the Old South Road.
Just recently, according to a tourist’s account, a camper at Boggy Hole, in the Ellery Creek, “took his shovel for a walk”.
Apparently as a conscientious environmentalist he decided to burn his used toilet paper. A gust of wind blew it away and rangers spent two to three days controlling a bushfire.
Mr Weir says some Aboriginal people burn their cars by the roadside when they break down, apparently to deny scavengers the still useful bits of the vehicle.
The gap between the necessary equipment and manpower, and what the government is willing to pay for, is so massive that it is not even worth asking: “What would it take to adequately manage bush fires in The Centre’s magnificent parks?”
Perhaps it could be asked in a year’s time, now that the Parks and Wildlife head office is being repatriated to Alice Springs from Darwin by the new government.
Mr Weir says in an ideal world areas of bush would be subjected to “prescribed” burning, wide enough for a wildfire to be unable to cross them.
That would be done – ideally – from a road or track (a graded trail is generally only used in an emergency), or along corridors blasted free of dry vegetation with oversize leaf blowers generating an airflow of some 300 km/h.
But you would not only need much more staff than available, you would need it at the right time: not much wind, and near zero temperatures. As fate would have it, this is one of the windiest years on record.
The next best thing, says Mr Weir, is dropping incendiaries from helicopters in high fuel load seasons in the right weather. This enables larger areas to be burnt, thereby protecting more land and needs minimal staff.
This year an area of about 100 square kilometers was burned in this way. Mr Weir says: “The park is now better protected in some areas.”
Another consideration is the temperature of the fire: if the fuel is the introduced buffel grass (fought as a weed in some states), the harm done to trees and shrubs is usually fatal due to much hotter fires.
But if it is a “cool” fire, burning native grasses, the crowns of taller vegetation remain intact and in fact, growth is stimulated all ’round.
The heartening part of the story is the almost magical resilience of the local flora.
There has been no rain here for months – a near record period – yet green grass and bushes are sprouting from the blackened soil.
The tuba of the plant contains moisture. Fire releases it, and life starts all over again.

BELOW: The scars of the bushfire which stopped just short of the Ormiston Gorge campground which had to be evacuated. the photo was taken looking west, one kilometer west of the campground. The Larapinta Trail is in the foreground (bottom left), and Mount Sonder (top right) in the background.