“The NT Police shoulders a huge burden from alcohol sales. They cannot be expected to tackle the social problems that result, in the absence of further initiatives to stop the flow of alcohol in the community.” – Coroner Greg Cavanagh, Kwementyaye Briscoe Inquest

Less than one month after taking power and ushering in a new era of Territorians taking “individual responsibility” for their drinking, the Mills CLP Government has been called upon by the Coroner to urgently convene a stakeholder meeting in Alice Springs to commit to “all available, reasonable measures to reduce the supply of excess alcohol from take away outlets”.

This is one of two recommendations to the government arising from the inquest into the death in custody of Kwementyaye Briscoe, who died in the Alice Springs Watch House on January 4 this year. Coroner Greg Cavanagh handed down his findings today.

The other recommendation is that nursing staff, with a suitably equipped medical room, be provided on a daily basis to the Watch Houses in Alice Springs as well as Darwin, Katherine and Tennant Creek.

Some progress has already been made on this front. Nurses began working at the Darwin Police Station just weeks before Mr Briscoe’s death, and were stationed for the first time in Alice and Katherine from April 23, 2012. At present they work from 7pm to 3am, from Wednesday to Saturday, with plans to expand the number of shifts and to recruit nursing staff for the Tennant Creek Watch House.

There are three recommendations to the NT Police, but no finding that an offence was committed by any member of the force (and there was no request from Counsel for him to so find). The recommendations are that:
• dragging detainees is unacceptable ;
• a wheelchair, stretcher or the like should be obtained to transport prisoners unable to move themselves:
• rigorous auditing of Watch House rosters be conducted to ensure the role of Watch House Keeper is maintained.

In relation to individual members of the force, the Coroner unreservedly accepted that “decent people made errors” on the night of Mr Briscoe’s death, but the “catalogue of errors is so extensive, and involved so many police officers of various rank, as to suggest mismanagement for a period of time by Police Command at a level higher than just ‘local'”. 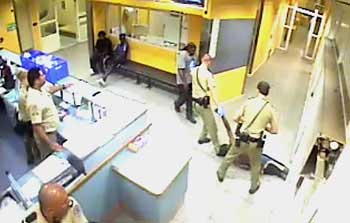 The  chronology of events from the time of Mr Briscoe being taken into protective custody up until the discovery of his dead body in Cell 9 of the Watch House makes for stark reading. Particularly disturbing is the account of what happened after the inadequate handover at the change of shift, around 11pm.

A health assessment had not been done, although the paperwork was ticked off, and Mr Briscoe had not been given medical care. Now the outgoing staff (two ACPOs and a Watch House Commander) passed on “inferior information” to the next shift, two probationary constables and Watch House Commander. This information included the “stubborn” view that Mr Briscoe was highly aggressive and too agitated to accept any care – a “fatal error”.

It is excruciating to read of the failings of this second shift, including their “utterly derelict” approach to cell checks, while amusing themselves on the Internet, and their ignoring of distress calls made by other prisoners.

“It is likely that the prisoners in Cell 16 were seeing Kwementyaye in the last moments he was alive and at the last opportunity police had to save his life. [The prisoners] could hear distressing noises from Cell 9, described by the men as coughing, gasping and choking … CCTV footage shows that the last movement of Kwementyaye’s body was a very slight twitching of his limbs, at 11.42 pm, just two minutes before the call button was activated.”

The probationary constables never spoke to the prisoners who activated the button. The next time anyone (the Watch House Commander) checked on Mr Briscoe was at 1.41am, when he was no longer breathing and already cold.

Again, some progress has already been made on these issues. Indeed, the Coroner describes the “suite of reforms” as “so comprehensive”  that he can only highlight the most significant.

These include:
• recruitment of staff from interstate on condition that they undertake a posting outside of Darwin;
• the employment of Custody Sergeants, ensuring that there is always a senior officer to properly mentor junior staff;
• the Watch House Keeper role has been retained and henceforth that officer wears a vest, rather than a small badge, identifying them in the role to “make it glaringly obvious if they were not on duty”.
• auditing of rosters and Watch House practices;
• “advanced technology” is to be used to ensure cell checks are taking place;
• the Custody Manual and the Standard Operating Procedures have been revised (the Coroner heard evidence that members of the force had either not read them or didn’t even know of the existence of the SOPs) ;
• a serious effort has already been made to improve training with regard to duty of care of detainees;
• there will be an induction package for officers working at the Watch House, “embracing information relating to previous deaths in custody and the findings at inquests” (the Coroner repeatedly expressed his dismay at the failure of police to implement previous undertakings made to him or recommendations made by him at past inquests);
• a commitment to purchasing a conveyance to assist officers to move detainees, but as the Coroner notes, “if they are so incapacitated that they are unable to move themselves [as became the case with Mr Briscoe], they should be taken to get immediate medical care”.

That leaves the matter of alcohol supply as THE outstanding issue awaiting commitment from government.

If we need any reminding, it’s all there in the Coroner’s report. He quotes Assistant Commissioner Mark Payne who has over 25 years experience of policing in the NT:
“As a serving police officer at Alice Springs, it is my experience that the vast majority of police work involves dealing with persons seriously affected by alcohol through excessive and very extensive liquor consumption. For the most part those seriously affected are indigenous and tend to exhibit evidence of chronic alcohol dependency including symptoms of poor health and hygiene.”

“The current situation where Police Officers in Alice Springs spend half their time on duty picking up ‘protective custodies’ is simply unacceptable,” says the Coroner, yet it continues despite all the various efforts at reform.

“The NT Police shoulders a huge burden from alcohol sales. They cannot be expected to tackle the social problems that result, in the absence of further initiatives to stop the flow of alcohol in the community,” the Coroner concludes.

He describes Mr Briscoe as “but one of many young men whose ambitions, education and health were eroded by alcohol abuse. At the age of 27, he had already begun to show the signs of chronic disease. At autopsy there was evidence of … hardening of the arteries. He had clearly been binge drinking for around a decade, and alcohol had been involved in each of the adult offences he committed.”

Mr Briscoe had consumed a lethal amount of alcohol on the night of his death. His blood alcohol reading was .350, but the Coroner found that he died as a result of the combined effects of acute alcohol intoxication, positional asphyxia and aspiration, which ultimately obstructed airways and led to death”.

His supervision and treatment by NT Police was “completely inadequate”.

“This lack of care resulted in his death, that is to say, this death was preventable and it should not have occurred.”