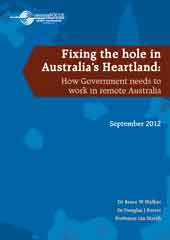 A possible cure for the Berrimah Line malaise is the by-product of the report by Alice-based remoteFOCUS – part of Desert Knowledge Australia – about fly-in, fly-out workers, presented to the Senate this week.
And this tonic would be far more potent than the pledges from either major party, invariably broken, that Central Australia will no longer be left out in the cold.
The answer could be a commission or authority, or a company established under the Corporations Act, wholly owned by the members, or some other legal mechanism, says Bruce Walker, the report’s main author.
He tailored the recommendations to the Pilbara, where governance is driven by a sustained mining boom, but says they could easily be adapted to Central Australia, which now has the welfare industry as its main business.
Dr Walker says the background to the decades-long desire of people in The Centre to have control over their lives is a litany of neglect, misunderstanding and disinterest.
The people governing the body he is proposing – board members, trustees or directors – must be “above the contest”.
They should be appointed to the “board” for a longer period than the normal political cycle “and the characteristics of the board members should align closely with the functions and mandate of the body.
“A critical issue is that a new governance body would require mandated authority to act and an ability to achieve the outcomes in the best interests” of the region.
That means their powers will need to be enshrined in law.
The report says: “The number of people appointed to the body should be smaller rather than being fully representative of a range of Pilbara [read Central Australia] interest, possibly five to seven people.”
They would be charged to serve the interests of the region plus other wider interests.
Funding certainty will be essential for success.
The body “will be required to influence Commonwealth agencies having interests and programs in the region, state agencies operating in the region and local and 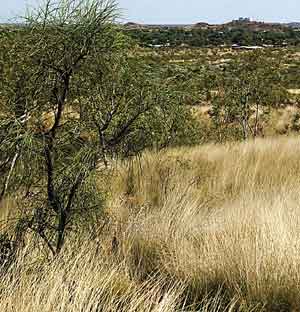 regional shires and regional authorities including Aboriginal organisations responsible for local outcomes.
“To be effective this body must be capable of influencing the direction of expenditure and performance outcomes across each level of government and at local government level.
“It must also be capable of negotiating with the private sector to obtain an optimal alignment of interests.
“Both ‘upwards’ and ‘downwards’ accountability arrangements need to be defined. ‘Upwards’ accountabilities will be to various federal and state political and administrative authorities and agencies; ‘downwards’ accountabilities will be between the existing and / or putative regional structures and relevant local government, community and other representative bodies and organisations and to local people.”
It is not defined how accountability to local people would work.
It would need funding and capability “which matches mandates [and] ability to adjust mandates and settle disputes over time as no arrangements will be perfect and circumstances will change.
“Appointments should extend beyond the political cycle and be accountable to the stakeholders against the criteria laid down by them.
“Such a body would need, by its composition and legal structure, to be above the contest and endure over time.
“Accountability, ideally, might be through a reporting mechanism such as a joint (federal-state) parliamentary committee or through an auditor-general model.”
The report says in the Top End of WA, such a body should have the following objectives:-
• Maintaining and promoting the Pilbara narrative.
• Brokering and settling agreements (peace-making where agreement is not possible).
• Clarifying the mandates of all levels of government and communities.
• Clarifying outcomes and service standards appropriate to place and scale.
• Matters on notice — anticipating, researching, monitoring, planning and developing strategy.
• Conducting reviews and reporting, ongoing governance review and action learning.
Aboriginal people in the Pilbara need to be integral to the process, “not an add-on,” and this would no doubt apply to Central Australia as well.
“Changes cannot just be dictated by government,” says the report.
How the people of the Pilbara resolve the coexisting realities of Aboriginal people with entrenched legal and communal rights (and income streams and land holdings) “will be an ongoing challenge”.
Issues will be specific identities determined by culture and contract, and the desire of these groups of people wishing to derive normal citizenship benefits as individuals from services provided by government.
“They hold substantial native title rights to land across the Pilbara, and they will lock in substantial income in the form of communal royalty equivalents from these rights.
“Our earlier analysis has shown that in areas where there is a contest for resources, the agreement and negotiati 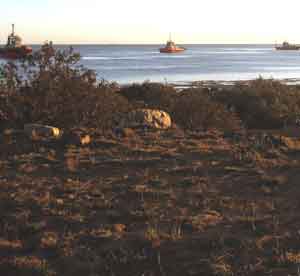 ng process actually reinforces individual and communal identities and rivalries.
“There will be conflicts between and within Aboriginal groups and between Aboriginal groups, resource companies and government which will need to be resolved in a permanent and relatively workable way.”
The report says nothing much will happen if change is left to the “public sector or conventional legislative processes.
“In fact, we argue, such efforts are negated by present governance arrangements.
“This cannot be driven from within the bureaucracy, which is constituted within the status quo and bound by its rules.
“Political leadership needs to come to the conclusion that there is a system problem not a policy problem.”
So, who will cast the first stone?
“Is there a body that is above the contest, authorised by the players to be responsible to oversee all of the above?” the report asks.
“It is now not a case of not knowing what to do, rather a case of having the collective will to do it.
“Only political and civic leadership will drive the necessary reforms.”
Photos from the report – landscapes in Central Australia and the Pilbara.