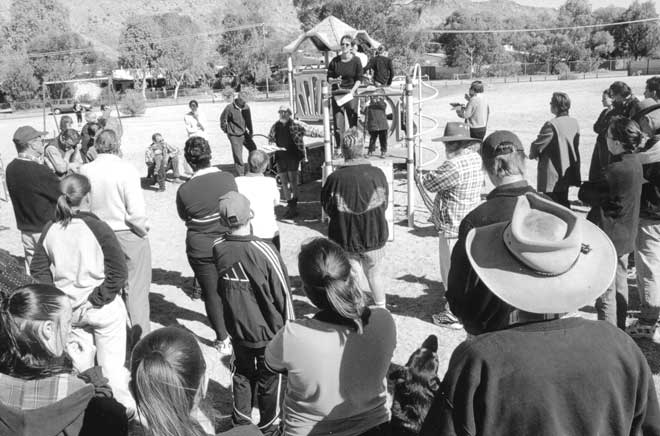 Local residents rally to save Finlayson Park in June, 2001. Their voices were heard. From our archive.

UPDATE, September 16, 2012, 2.20pm: With next to no discussion of the parks issue taking place in the open session of council meetings, it is not surprising that confusion has arisen. The draft report referred to in this article, identifying certain park assets for possible disposal and others for possible improvement, was included in the September committee meeting business papers but actually dates from 2004. This is not made clear on the cover of the draft, nor in the document to which it is attached, but only in small print at the bottom of each page of the draft. Nonetheless the contents of the report are of relevance to council’s current consideration of Cr Geoff Booth’s request that a forecast of “savings on maintenance” be made “as a result of reducing the number of insignificant land [parcels] currently zoned as parks”.
Apart from the public (and this journalist) councillors and officers would seem also to be confused about the issues. The recommendations A to E provided by officers do not match the A to E points of Cr Booth’s original notice of motion. Specifically Cr Booth’s notice of motion contained no reference to the redevelopment of Ashwin and Finlayson Parks. Cr Eli Melky asked in the last committee meeting how come the redevelopment of those parks – which he described as “welcome” – had slid into the the report. Deputy Mayor Brendan Heenan said costings would be needed before councillors could vote to proceed.
Officers were asked to go back and “correct” the report by Mayor Damien Ryan. Apart from wanting clarity regarding the confusion mentioned above, he was particularly exercised by the “Adopt a Park” report, part of the same agenda item and another facet of Cr Booth’s original notice of motion. He was “amazed” by its failure to get answers to the questions posed on the issue.

An issue which has previously generated a lot of heated debate, is quietly making its way through council’s Technical Services committee system, with a number of parks in the municipality now identified for possible disposal.

Last year Councillor Eli Melky proposed that council could raise funds from the sale of “surplus land” designated as parkland, while developing remaining parks with better facilities. At the time he thought that only up to four ‘parks’ were suitable for sale. There was uproar.

The issue had been dormant since 2001 when a community outcry stopped a council proposal to sell off six local parks. Now, in an initiative driven by Cr Geoff Booth, council has for its consideration a draft list identifying six parks for disposal plus a further four for partial disposal, with an estimated return of $1.65m to council coffers. Some (possibly all) of this money would go into upgrading and developing other parks.  Council spends over $2m annually on the maintenance of open space, including parks and ovals.

The disposal list – contained in a draft report provided to elected members by Scott Allen, council’s works manager – identifies another three parks for return or partial return to the Crown.

Mr Allen and staff developed an assessment system to work through the issues, scoring each park against 10 criteria, including size, utilisation, security, accessibility, and environmental values. Some parks, although low-scoring, have not been recommended for disposal. These are Tucker (retain and upgrade), Gilbert (develop as a bush park), Reus (retain as a drainage easement), Spearwood (retain as a bush park), Lewis Gilbert (retain and improve),  Ashwin and Finlayson (retain and improve both, in response to vocal residents’ desires) and Acacia (develop as a bush park at the gateway to town). 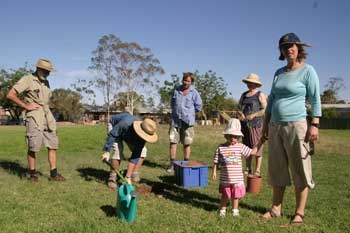 The parks recommended for disposal are: Walmulla (too small to be useful), Westland (with the exception of a possible sacred site, which would be returned to the Crown), Campbell (at right, residents tree-planting in this park in  2008), Rotaract East, Tmara Mara, Bowman and Kempeana (their disposal to be offset possibly by development as a park of better vacant land in the area), and Newland (to be consider for redevelopment as a retirement village).

Some other parks may have a sacred site within their boundaries and this has yet to be verified. In these cases the recommendation, as with Westland, is to return the sacred portion to the Crown.  They include Maynard (the rest of the park to be upgraded) and Warber (develop as a bush park if not sacred).

Parks recommended for partial disposal are Oleander and Eagle. It is also suggested that the pedestrian walkways on Bowman and Kempeana be retained.

Cr Booth has cleverly avoided controversy by ensconcing the issue of disposal within a number of other positive initiatives for council’s park assets:
• a study to establish the current quality of the town’s designated parks;
• a study to show the potential for increasing the number of quality precinct parks around town;
• a forecast of costs for the upgrading of such parks over three years;
• a forecast of savings on maintenance as a result of “reducing the number of insignificant land parcels currently zoned as parks”;
• a feasibility study for an “Adopt a Park” scheme.

An earlier report to council earmarked the following parks for potential development as precinct parks, sized between 8000 and 28,000 sqm, and to be equipped with a certain level of infrastructure including barbecue and public toilet. They are Frank McEllister (already a precinct park for Gillen), Rotarac Park (Northside), Frances Smith Memorial Park (Eastside), Aquatic and Leisure Centre (CBD), Albrecht Oval (Larapinta). In the smaller Industrial and Golf Course areas, Spicer Crescent Park and Lewis Gilbert Park are to serve as neighbourhood parks. The Gap area misses out in this list and has only three small local parks apart from Acacia, which is owned by the Crown and is recommended for development as a bush park. One of the three small parks is recommended for disposal.

The draft report recognises the sensitivity of the issue and recommends “extensive community consultation and sympathetic hearing of the view of the residents”.

The report in full can be found in the business paper for last Monday’s Technical Services committee meeting (September 10) on council’s website.

By ERWIN CHLANDA How do you deal with having post-traumatic stress disorder, being retired and bored? Easy. You buy an “absolutely dead stock standard” Holden ute, spend...
Read more
Issue 36

By ERWIN CHLANDA Former mayor Damien Ryan (pictured) has been unsuccessful in his tilt at Territory politics for the CLP, failing to unseat the Territory...
Read more
Issue 36

OpEd by ELI MELKY The public backlash in response to the story in this newspaper on Thursday last week regarding co-opting of councillors was not...
Read more