An on-going program of events – weekly or fortnightly – would attract more people into the CBD, supporting local business and creating a safer environment. The Town Council should be the instigator of such a program, employing a full-time events coordinator for the CBD, Councillor Eli Melky (at left) proposes. He won initial support for the move from his  colleagues last night.
Cr Liz Martin wasn’t sure it needed a full-time commitment but she wanted to see an expanded position (council already has a community projects officer who organises some events, such as the Night Markets and the Christmas Carnival).
Cr Steve Brown thought full-time was warranted.
Cr Geoff Booth “fully” supported the motion and thought there may be possibilities of financial or in-kind support from CBD traders. Council should do some research on this, he said.
Cr Melky also proposed that council encourage the formation of a traders’ association and that the events coordinator’s “strategic marketing plan” be in line with such an association’s “business plan”.
His colleagues were less enthusiastic about this proposal. Mayor Damien Ryan thought that the Chamber of Commerce should be asked for their input, however Cr Booth poured cold water on this idea, suggesting that a lot of businesses are not members. 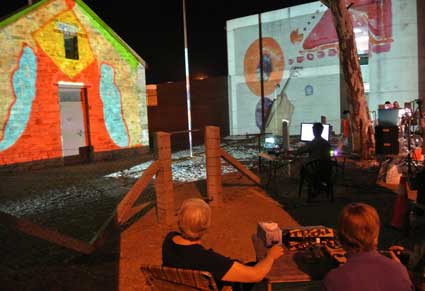 Mayor Ryan agreed that few if any retailers in Todd Mall were members of the chamber.
He also commented that a number of mall traders have expressed their disappointment to him with this year’s Alice Desert Festival. Where was the parade? they wanted to know. The festival is nearly over and people were feeling that it wasn’t happening. Council puts $35,000 into it and needs to understand “what’s driving it”, he said.
The motion was deferred while council officers prepare a report, examining the options and costs. CEO Rex Mooney expressed his view that a part-time position would not work. The report will be ready for next month’s round of meetings.

Pictured: A section of Parsons Street transformed by ‘video architecture’, as part of the Alice Desert Festival (see separate story this issue). The activities of an events coordinator could involve more than performance.

Candidate Dianne Logan in the last council elections made activities in the CBD the central plank of her campaign.