Asserting themselves through music 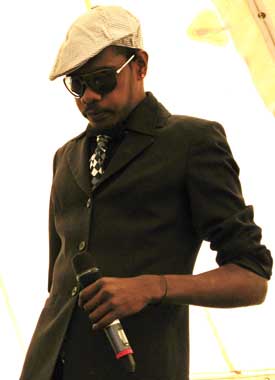 “Yuendumu has seen its troubles / We don’t need no more fighting / how about we, Warlpiri, start uniting?”
Three young hip-hop artists from Yuendumu went to the heart of the matter when they took to the stage on Saturday, as part of the line-up at The Hub, the “heart” of the Alice Desert Festival’s program.
With the audience’s enthusiastic response, and the encouragement of their mentors “Elftranzporter” and “Monkeymarc”, they overcame initial shyness and warmed to their task.
Rene (Coull) led the opening number, followed by “T-bone” (Tyrone Spencer), asserting his youthful masculine pride: “T-B-O-N-E, I’m number one, plus two and three”. The audience went mad for his moves and one young guy got up to show his own.
Rene later sang about life as a young woman; one line went like this: “After giving birth / helped me understand / what life’s worth”.
Leon “The Desert Man” (Penhall) accompanied them on keyboards.
The three, together with a bunch of other young people, have developed their music through a  Warlpiri youth program called Red Sand Culture, a collaboration of the Mt Theo program and Incite Youth Arts. They’ve released a 17-track CD, with tracks downloadable from the Red Sand Culture site.

The music was mostly of a different flavour but the Desert Divas, who followed Red Sand in the program, were equally proud and hopeful: “We know where we come from / we know where we stand … we’re making our future / creating a change” went the lyrics of their group song. 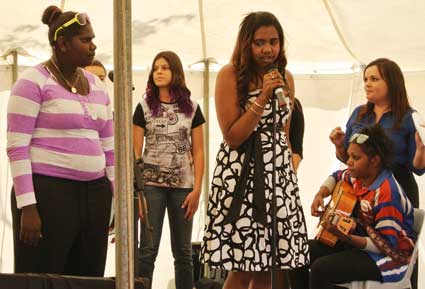 There were 15 of them, led by mentors Catherine Satour and Jacinta Price. The program, for young Indigenous women wanting to develop in music, is in its third year. It was Satour’s idea: there was nothing like it in Alice when she was growing up, she said, and she had to go to Adelaide to get performance training and experience.
After the group song, each “diva” got a chance to get up as a solo or in duet.
Cassandra Williams, who’s had personal mentoring all her life from her well-known musical family, including grandfather Gus, sang a heartfelt cover of Bonnie Raitt’s “I can’t make you love me”.
Love songs, many of them original, were popular; other themes included the desire to perform, the importance of saying sorry, the importance of home (“my solid ground”), the struggle to survive.

Some promising talents were revealed, especially Lexie Woods who sang in a strong, sweetly husky voice a soulful love song, without musical backing. As with Williams, you could have heard a pin drop during this performance.
Desert Divas was presented by Music NT. – KIERAN FINNANE