Feeding the chooks: slim pickings from a rushed doorstop with Terry Mills, his slip of the tongue and who heads the new advisory body? 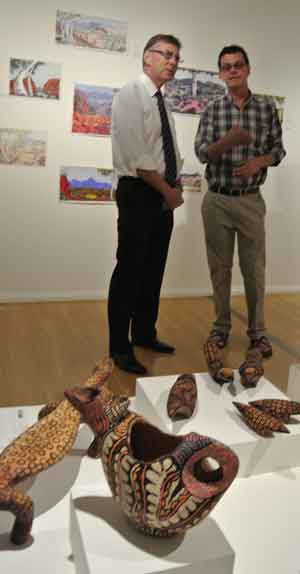 New Chief Minister Terry Mills spoke about big changes in the government’s tourism promotion arm and gave details of the legislative foundation for obligatory alcohol rehabilitation during a rushed doorstop news conference in Alice Springs this morning.
He said John Fitzgerald is losing his position as the head of Tourism NT.
There will be a new chairman, Tony Mayell, a former executive of the NT Tourist Commission and manager of the Ayers Rock Resort. He will be based in Alice Springs, starting in December.
The Tourism Commission will be “an overarching body, like a board of directors,” Mr Mills said, “including people from within the game who will provide policy guidance and direction for the Tourism Commission”.
Decision-making will be “closer to the industry and in this case here in Alice Springs”.
There will be 120 more police, starting with 20 in Alice Springs.
From the Alice News: Under what legislation will people be incarcerated in an alcohol rehabilitation facility?
“It will be a breach of a court order,” said Mr Mills.
“That legislation is on the table for the first Parliamentary sittings in October.
“It is on the basis that if you have come into protective custody three times in six months then there needs to be a response.
“First is you are required by order of court to go and get treatment. If you breach that court order then we have no alternative but to provide that intervention,” said Mr Mills.
Quarterly publication of crime statistics will be re-introduced as soon as possible.
Alice News: Where is the alcohol treatment facility going to be and what will it cost?
Mr Mill’s last words in the doorstop: “I’ll tell you later.”
Photo: Mr Mills (left) at the Desert Mob exhibition with Desart CEO Philip Watkins this morning.

UPDATE 4.30pm
Minister for Tourism Matt Conlan says relocating Tourism NT “will help to increase the dwindling tourist numbers we have seen over the last decade.
“A component of Tourism NT will continue to be based in Darwin [and] I am currently working with Tourism NT to determine the details and how this will be implemented,” Mr Conlan said.
Central Australia boasts a 365 day a year tourism industry and “is also home to some of the Territory’s most popular tourist attractions like Uluru.
“I am committed to returning tourism to a top priority of government and I will work hard to ensure tourism once again becomes a major pillar of the Northern Territory economy.”

UPDATE 7.10pm:
Mr Mills fell victim to a “slip of the tongue” when he said this morning in Alice Springs: “There will be a new chair commencing, that’s Tony Mayell, who will commence in December.”
What he meant, according to a spokesman, was that Mr Mayell will be the new CEO of Tourism NT, replacing Mr Fitzgerald.
In a media release issued at 4.20pm today Mr Conlan said: “I am pleased to announce long term Territorian and experienced Airnorth CEO Michael Bridge will be appointed as Chair of the Board when the Commission is established.
“Mr Bridge has a deep understanding of local issues and I am confident he will maximise the Territory’s economic and tourism potential.
“I have also appointed Tony Clementson as Ministerial Tourism Advisor.  Mr Clementson has extensive experience and knowledge of the Territory’s tourism industry having held the position of General Manager Tourism Top End for more than eight years.”
The Alice Springs News has asked the chairman of the local tourism lobby, Tourism Central Australia, Jeff Huyben, for a comment on the fact that both positions were given to Top End people, not Central Australians. 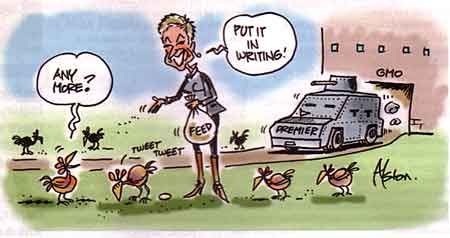 The sobriquet “feeding the chooks” dates back to Queensland Premier Joh Bjelke-Petersen and his media adviser, Allen Callaghan. The chooks were the journalists and Sir Joh would throw them a few morsels at his pleasure, and in a way that would suit his purpose.
A contemporary version is Dixie Marshall who heads up the WA Government Media section and is the chief minder for Premier Colin Barnett and his cabinet.
In the Walkley Magazine, published by my union, the Media Alliance, the question is raised to what degree Ms Marshall’s team is running rather than serving the government. (Cartoon by Dean Alston.)
Do we have a similar situation developing in the nation’s newest Tory regime?
We at the Alice Springs News have had frequent contact with Terry Mills since he became Opposition Leader in 2003. We got to know him as a pleasant, accessible and articulate politician who would drop into our office most times he came to The Alice.
On one occasion he brought us a bar of chocolate – not a bribe, don’t worry, just a quirky gesture.
Since becoming Chief Minister just over a week ago he’s done a lot of right things by Central Australia, allocating significant ministerial portfolios to MLAs “down here”. He’s about to return the government tourism promotion arm, Tourism NT, to Alice Springs.
But there is a “but”.
Journalists have just endured 11 years of outrageous media management – manipulation is the more appropriate word – under Labor governments, at the mercy of an army of minders who made direct access to ministers all but impossible except in carefully – and cynically — stage managed occasions.
They played favorites and withheld information as they pleased. “Send us an email and I’ll give you some lines” was the attitude.
Is Mr Mills taking on board the media management of his predecessors?
In his two recent visits – on August 22 and today – there were plenty of photo opportunities but scarcely any question and answer opportunities except doorstops with extremely limited usefulness.
Both times Mr Mills gave a preamble about being in a hurry. The four journalists asking questions today had to compete getting their questions in, talking over the top of each other. They clearly had a lot more to ask than they could.
Today’s doorstop at the Araluen Centre, as the Desert Mob event unfolded around us, lasted for five minutes and 53 seconds before a minder arrived and almost bodily dragged Mr Mills away, to “say a few words” at the opening.
Mr Mills was escorted to the auditorium where he sat in the front row for 20 minutes, chatting with people in his party, as the majority of the audience ambled in to take their seats – 20 minutes the journos could have used well.
Doorstops are demeaning to journalists, inefficient, and fall well short of producing the news reporting without which a democracy cannot function.
Some suggestions to the new Chief Minister:-
• Personal conversations between journalists and politicians – especially ministers – are essential.
• Some journalists prefer one-on-one interviews because they don’t want to tip off competing media about the story they are working on.
• Facts should be available from the departments, but ministers need to speak on policy.
• Journos need to give them fair notice of interview requests, say, a day, and an interview duration of 15 minutes is usually enough.
• With me, talking on the phone or Skype is fine.
What’s so hard about that? No question, such an arrangement would benefit the new government enormously: their predecessors got no points for how poorly they treated the media.
– ERWIN CHLANDA