The Teenager and the Shark, installation by Drew Moynihan, partial view. In the background, a partial view of Kelly-Lee Hickey’s Detritus Theory. Photo by Leonardo Ortega.


Two ways of drawing you in, as if from different worlds: with one you can imagine yourself on a windswept shore, seeking protection within the flimsy shelter you find there; with the other, there’s the seduction of the curtained space you are invited to enter. Once inside, both engage you by the moving image. In one, it is you, the viewer, who moves as you take in the unfolding story, frame by frame (like a reverse magic lantern, the foundation of the art of cinema). In the other, you remain still while video image and sound sweep you away. The archaic and the contemporary intermingle, within the gallery space, and to a degree within both works.
Art is always experiential but very often viewers do not give themselves over to it. The language may be too subtle, too rigorous, too obscure, too demanding, or else perhaps too obvious or even repellent for more than fleeting consideration before we move on. At Watch This Space in an exhibition called Shift two works excitingly create their own commanding space in which to be received. No question of a glance and moving on – come inside!
Drew Moynihan conjures with a lovely lightness and sparseness the story-telling space of ages in the Western tradition –  the home, the hearth. And within it he, descendant of the Irish seanchai, has a story to tell. A few written lines guide us into the territory of the mythical, the archetypal. The images while figurative, are not literal. They evoke psychic pain, and deliver hope of survival and redemption. This is reinforced as you leave the space with a trinity of abstract images – suggestive for me of a central beating heart in a black sea. 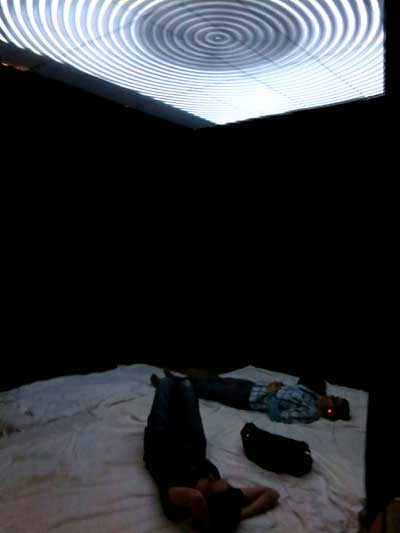 More than usually, there’s a case for not giving too much away with description of the content of both this work, The Teenager and the Shark, and the other, The Dimension Elevator Mk2, a collaboration by Dave Nixon and Nicky Schonkala. First and foremost, they are about giving yourself over to the experience.
Nixon and Schonkala work with video, but against the passive mode of taking or leaving it at the flick of a switch. You must first absorb the technical instructions (not difficult), take off your shoes (as if entering a temple), draw aside the curtain, adjust to the darkness of the space, lie down (on a mattress and quite possibly next to other people, an unusual intimacy in a gallery – as in the photo at right, courtesy L.Ortega). When the video starts, instructions guide you further towards reception of the work, towards being very physically present and letting your mental control slide towards neutral.
That’s not to say that this work won’t engage you intellectually. It will. After a while come two very powerful statements of philosophical reflection – about perception, awareness, consciousness –  but first sound and image shift you into a compelling space of questing open-mindedness. It feels vast, unending: you may experience a flutter of fear, you will be moved and invigorated.
The abstract image derived from repeat patterns, whether concentric circles or lines or more complex configurations, has age-old roots in cultures around the world. It summons a tremendous potency in this work, opening me more to that vein of Schonkala’s textile art (such as the work recently highly commended in the Alice Prize), as well as to the work of Aboriginal artists such as Warlimpirrnga Tjapaltjarri (you can see work by him at Papunya Tula Artists).
There are two other artists showing in this exhibition. Jason Japaljarri Woods has two video works, both produced by PAW Media at Yuedumu in 2010 as part of the Animating Jukurrpa series. Both are very effective in their story-telling, well-paced and each with a distinct style. 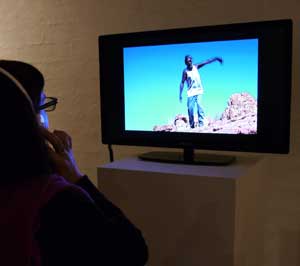 In Emu Story Curtis Jampijinpa Fry speaks to camera and enacts aspects of the story at a magnificent waterhole – actually two deep holes like eye-sockets scooped out of a smooth face of rock. Spliced into this are short animated sequences of sand drawing, showing tracks and representing the country spoken of.
In Crow Story, Neville ‘Cobra’ Japangardi Poulson (in the photo at left, courtesy L. Ortega) narrates a rather harsh tale of how crows came to be black, accompanied by delightfully drawn animations by Woods. With just a few lines, he endows his creatures with character, particularly the greedy crow sleeping on a full stomach.
Kelly Lee-Hickey, known as a poet, appeals to the poet within in her installation. She provides a type-writer and blank paper, a shredding machine, a bowl of earth, a large kettle of water, a shelf and a collection of small terra-cotta pots. This is an invitation to write, to ‘plant the seeds’ of your memories, thoughts, feelings. There is the possibility of actually sitting down and doing it and on opening night this was very popular with young children. But the work can also stand as a visualisation of a transformative process that is open to all.

Shift is part of the Alice Desert Festival. It was curated by Alice Buscombe, Pip McManus and Leonardo Ortega. Shows through to September 22.