Trucking … you gotta love it!

Amidst the crusty truckies at the reunion in Alice Springs last week was one quite unlike the rest: she is a petite blonde driving the rig of the year, a 50 tonne Drake low loader pulled by a 550 horsepower Western Star – total value, more than half a million dollars.
Perhaps the only hint there may be a woman driver behind the wheel is the prime mover’s colour: pink.
Julie Gavin transports earthmoving and mining equipment all around Australia.
She works for Perth-based Gavin Transport, owned by hubby Eamonn, with a fleet of 31 rigs.
She loves the job. Why?
“I don’t know. It’s in my blood. My dad was a truck driver. I pretty much grew up under a truck or in a truck.”
What’s the future of the industry?
“Good question. What’s next week’s lotto numbers, Erwin?”
Since the days of Julie’s dad, trucks have come a long way: stronger, more sophisticated, safer and greener because they are more fuel efficient per tonne.
Most of all they are bigger: it takes as many drivers to drive a small truck as it takes to drive a big one.
And that’s the best way to deal with the industry’s main worry: shortage of drivers.
Julie says “her” truck has an automatic gear box and, of course, power steering: “It’s great. Sit back, enjoy the view.”
Driving the huge machine isn’t a big deal but coping with a growing bureaucracy certainly is: a long shot from the past which is frequently a subject of yarns at the annual reunion, attended by 1000 people last weekend, held by the National Transport Hall of Fame.
Says Julie: “I love hearing the old stories.
“They were able to get away with a lot more than what we can these days.
“Some of the things they used to do, you wouldn’t even dare try them these days, overloading, running back roads to try and hide from being pulled up.
“There are a lot more restrictions in place.
“I don’t get into a lot of trouble when I get pulled over. My paperwork is up to date, everything is all good.
“I have to stop when the sun goes down, because my truck, when loaded, is oversize,  and so I get a good night’s sleep every night,” she says.
“But there are a lot of silly things you hear.
“Someone makes a spelling error in their logbook, and they get a $400 fine for it.
“I can’t see how this can kill anyone, or is a safety issue, when someone spells Alice Springs without the ‘e’ on the end of Alice.
“That’s how stupid it’s gotten. A lot of it is just revenue raising.”
She says in WA a driver must have a break every five hours “but if you go 10 or 15 minutes over, and it puts you at a truckstop where you can have a shower, get a coffee, you have a proper rest, they don’t mind in WA.
“They don’t like it to but they give you that leeway.
“But in the east, five minutes over your drive time and you’re fined, big dollars, $600 up.
“Each state is different. In SA the driver is fined and the company is fined even more.
“You can be pulled up at a weighbridge and they can get you for one, two, three, four five thousand dollars just like that, on the spot.
“Your whole week’s wages can be gone with just one guy in a bad mood.
“They go right through your logbook, all over the truck, pick any crappy thing he wants and starts writing you up.
“It’s a hard industry to be in. You wouldn’t do it if you didn’t love it.”
She’s just done a trip from Perth via Port Augusta, Broken Hill, Burke, Goondiwindi, Towoomba to Brisbane.
Once you hit the Queensland roads it’s pretty bad, she says, “terrible, ripped up, bumpy, more like a bush track than a highway”. 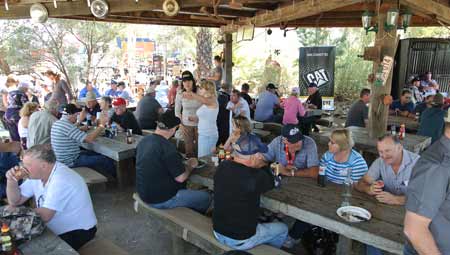 But the rest of Australia isn’t too bad.
She’d like to do more trips up the Stuart Highway: “In my opinion it is one of the best highways in Australia, it’s nice and smooth and you can see for miles.”
She has a speed limit of 100 km/h but fully loaded keeps it to 60 or 70 km/h. Going faster “the tyres heat up and they blow.
“I don’t want to be changing tyres all day.”
She has four spares, and a small crane in the middle of the gooseneck to lift them off and on.
Eamonn says to get drivers “you’ve got to find someone who lives it, breathes it, and  when you find them you’ve got to hang on to them.
“Until they get their licence they can get more money at MacDonald’s.
“They can wash trucks but they don’t want to do that any more.
“And when they do get their licence, and they are young guys, the insurance premiums go skyrocketing because they have no experience.”
Another disincentive is “too many rules and regulations. We need some commonsense.
“We still get the odd young guy coming through.
“You’ve got to want to do it, don’t ya?”
Caterpillar’s Jeff Tyzack says the truck manufacturing industry is hugely competitive now, with 17 major brands, American, European, Japanese and Chinese now.
Jeff’s firm shouted the reunion crowd lunch on Sunday, in the picturesque Stuart’s Bush Kitchen, cooked and served by volunteers.
He says a CAT prime mover starts at around $200,000 and like most, is a marvel of engineering.
“The emissions that come out of the engines … look at the tailpipes, they are still silver inside.
“They are not black, sooty engines any more. They are clean, they are green.
“The transport companies are making sure the trucks are maintained very well so they get the best possible fuel economy and the best possible life out of the vehicle,” he says.
Computers monitor fuel consumption, speeds and how the driver is driving the vehicle. A certain rev range must be used to get the best performance and fuel economy.
The trucks are safer than ever before. ABS anti-lock brakes are now in virtually every new truck.
Yet the fuel economy of trains is far greater – so how can trucks compete with rail?
He’s driven road trains up and down the Stuart Highway in media events a few times, and says there is a strong case for motorists to be educated about how to live with road trains.
“Let’s say a road train is coming up the highway at 90, 95 km/h, closing on a car with a caravan which is doing 90.
“Often the car driver’s first reaction is to back off on the throttle. He will slow down much quicker than a road train can.
“The road train has to brake to avoid the caravan” and this can lead to the trailers sawing and possibly leaving the road.
“If the caravan driver stays at a constant pace it’s much safer for them and for the truck driver,” says Jeff.
“And if you overtake a B-double or a road train, he will just hold his speed and hold his lane.
“He knows you’re there. He can see you.
“You just have to make sure what you are doing is safe.”
In the wake of last week’s fatal crash just north of Alice Springs, between a road train and a car towing a heavy trailer, Jeff says there should be more driver education: “You can get a car licence and then you can put a trailer on the back without any further training.”
Road train drivers are “very gentle on the steering wheel, otherwise your trailers will move around.
“A car and a caravan have the same effect.
“A nervous caravan driver who’s a bit too abrupt on the steering wheel, will make the caravan sway. Then they over-correct and suddenly there is an accident.”