From Papunya to Paris: the interest in Western Desert art just keeps going

Papunya Tula artists at the National Gallery of Victoria last year with curator Judith Ryan. From left, they are Bobby West Tjupurrula, Long Jack Phillipus Tjakamarra, Ronnie Tjampitjinpa and Mike Tjakamarra. They are standing in front of a 1991 work by Ronnie Tjampitjinpa, Wartunuma.

A major exhibition on the origins of Western Desert art is set to open at the Musee du Quai Branly in Paris in October. Curated by Judith Ryan and Philipp Batty for the National Gallery of Victoria, Tjukurrtjanu opened in Melbourne last year, examining “a watershed moment in the history of art when a painting practice emerged at Papunya”. More than 160 of the first paintings produced there during 1971 and 1972 will be shown in Paris, together with almost 100 objects and photographs from the period. The Musee du Quai Branly’s website, describes the significance of the show thus: “By transposing to recycled wooden panels the motifs employed in ephemeral ritual paintings, the Aborigine [sic] artists of Papunya created an astonishingly inventive formal art, saturated with meaning. These works change the manner of understanding the territory and conceiving the history of Australian art.”
The Paris exhibition is just one of the events occurring in the second half of this year that gives Papunya Tula Artists – the desert’s oldest painting company and still the benchmark of independence and achievement – reason to be optimistic.
Along with the entire art market, the company has been experiencing a “cooling off”, says manager Paul Sweeney, but he sees it as a good thing. It has meant fewer people out there chasing artists to churn out paintings, and this has helped check the illusion in the minds of some artists “that everything they painted was gold”. Only in “a very few cases” has that been true, he says.
The rate of production has slowed, from around 300 works a month at the height of the market to a more manageable 100, yet there is still plenty of energy and commitment amongst artists as well as keen interest in their work by art lovers and collectors in Australia and around the world.
From hectic to just busy
The galleries that represent the company interstate were telling them “that things were slowing down” well before they felt it in Alice Springs, says Mr Sweeney. While the pace has now gone from “hectic to just busy” which is “kinda nice”, the second half of the year is building to a certain tempo: “We’ve definitely not gone into our shells. We’re still doing the same number of shows.”
The celebrations to mark its 40th year will culminate with their annual show in Alice Springs, on the last Friday of November, into which “we’ll pour everything”, says Mr Sweeney. The Araluen Arts Centre will mark the occasion with a parallel exhibition, reflecting on the relationship of the people of Alice Springs with the company, showing works collected by locals over the decades. 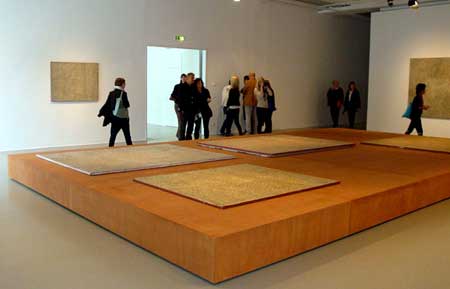 Meanwhile, two of the company’s artists, the late Doreen Reid and the very much alive Warlimpirrnga Tjapaltjarri, are represented in the 13th Documenta in Kassel, Germany, showing until mid-September (installation pictured, with Reid’s work lying flat, Warlimpirrnga’s on the wall) . Documenta is a huge and eclectic art event that has been going since 1955 and is expected to attract up to 750,000 visitors. Among exhibits by some 300 artists, the “pulsating abstractions” of Warlimpirrnga attracted the eye of New York Times art critic Roberta Smith, who described them as “riveting”.
Works by some of the company’s most famous artists, past and present, feature in Ancestral Modern, showing at the Seattle Art Museum and drawing on the collection of Australian Aboriginal art by Margaret Levi and Robert Kaplan. It opened at the end of May and is still getting press notices, says Mr Sweeney. The artists represented are Richard Yukenbarri, George Ward, Makinti Napanangka, George Tjungurrayi, Ningura Napurrula, Yukultji Napangati, Eileen Napaltjarri, Doreen Reid and Mick Namararri.
These international events are not selling shows but are part of the essential culture around serious art production, keeping interest in the art alive and conferring prestige.
Events in a similar vein are occurring on Australian shores. A series of large-scale works by the late Makinti Napanangka is hanging at the Sydney Biennale, showing till mid-September. She was among the 19 Australian artists selected.
Work from the early years
Significant works by company artists, with a strong representation from the early years, feature in Desert Country, which draws on the collection of the Art Gallery of South Australia and is touring into early 2013 (it’s currently at the University of Queensland Art Museum).  The Papunya Tula artists included are Kaapa Tjampitjinpa, Long Jack Phillipus, Yala Yala Gibbs, Clifford Possum, Tim Leura, Johnny Warangkula, Mick Namararri, Turkey Tolson, George Tjungurrayi, Nyurapayia Nampitjinpa, Doreen Reid, Yinarupa Nangala and Naata Nungurrayi.
And, later this year the Art Gallery of New South Wales will hang a large selection of Papunya Tula etchings, from the entire suite that they have purchased.
Alongside these cultural events, are selling shows, including the current annual exhibition at Darwin’s Cross Cultural Art Exchange which coincides with the NATSIAAs; a smaller show at Metropolis Gallery in Geelong; the annual show with Redot Gallery in Singapore, opening on October 17; and of course the company’s annual contribution to Desert Mob here in Alice, opening on September 7. With lots of collectors in town, this is always a busy time for the gallery, as with all the serious local galleries featuring Aboriginal art.
No artist has stopped painting since the cooling of the market, says Mr Sweeney, they’ve just slowed down. The company has certainly had a conversation about its business as there’s “nothing propping this place up”. Without external support, it proudly funds its activities and more, including the establishment of a dialysis facility at Kintore, the construction of a swimming pool and, more recently, the provision of a truck-mounted mobile dialysis unit that allows its painters suffering from kidney disease to remain at home or at least to return for periods.
While things may not be what they were, there’s no cause for pessimism, says Mr Sweeney.

Below: One of the company’s leading artists, Patrick Tjungurrayi, at work. In 2008 he won top prize in the Western Australian Indigenous Art Awards. This year his work has been included in Forty Years of Papunya Tula Artists, Sun Valley, Idahao, USA; Visual Rhythm, Cross Cultural Art Exchange, Darwin; and the forthcoming Dreaming in Black and White at Redot Gallery, Singapore. 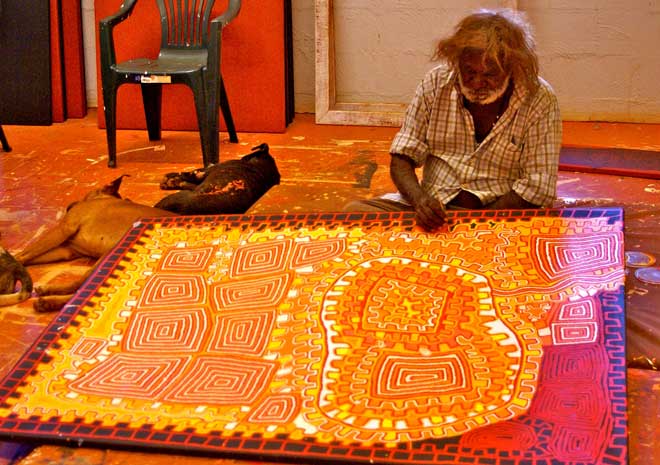