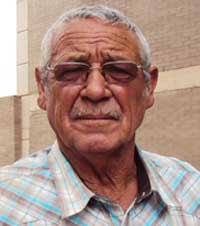 The case against Barry Abbott (pictured), former Senior Territorian of the Year and longtime worker with young people caught up in the justice system , will now be heard by a magistrate, not by judge and jury.
A preliminary examination to see whether the case should proceed to the Supreme Court was scheduled to start today. At the penultimate moment the prosecution conceded, as the defence had pushed for all along, that it could remain in the Court of Summary Jurisdiction.
It will now be heard there from December 5 over six days. A jury trail would not have been likely before next year.
Mr Abbott was in court today together with his co-accused,  Barry Shane Abbott, Valerie Abbott, Damian McCormack and Shakira McCormack.
All are facing charges of deprivation of liberty on a number of counts (two for Mr Abbott) as well as other charges. There are also aggravated assault charges against Mr Abbott (three counts),  Mr B. S. Abbott (two counts), and Mr McCormack (one count).
The accused will enter pleas this coming Monday, following which legal argument will be heard. It concerns whether or not a particular defence is available for the 29 (of the total 35) charges of deprivation of liberty in which the victims were children. This defence relates to the circumstances in which force (providing it is not unnecessary and not likely to cause death or serious harm) is justified. One of those circumstances is in “the case of a parent or guardian of a child, or a person in the place of such parent or guardian” when force is used to “discipline, manage or control such child”.