Home Issue 31 Mandatory sentencing or not, that is the question
Issue 31Issue 32Volume 19

UPDATE Thursday, Aug 9, 11am
Trish van Dijk (pictured) has confirmed that her question to Adam Giles was about “mandatory sentencing per se”. It was not about the old regime that existed under the CLP when it was last in government, as suggested by Simon Walker in his comment below. She told the Alice Springs News Online this morning: “I just asked a simple question: Are you going to pursue mandatory sentencing? And the answer was ‘no’.”

Now you see it, now you don’t. The Country Liberals’ policy is to introduce minimum sentences for certain categories of assault. That’s mandatory sentencing, but according to candidates Adam Giles and Matt Conlan at yesterday’s Meet the Candidates forum in Alice Springs, mandatory sentencing is  “not happening”.
“We won’t be pursuing mandatory sentencing”, said Mr Giles to a question from Trish van Dijk at the forum.
Mr Giles went on to speak with feeling about the very high incarceration rate of Aboriginal Territorians about which he is “emotionally disturbed”. His party’s intention is to tackle the root causes of crime, including by mandatory and voluntary rehabilitation of chronic drunks, he said, but when asked whether all this meant “a definitive no” to mandatory sentencing, he again ruled it out.
Mr Conlan joined in: “It’s not happening,” he said.

Today Mr Giles ‘clarified’ his understanding of the policy for the Alice Springs News Online: “Mandatory sentencing is a catch-all for everyone on all things. We’re talking about minimum sentencing for assault on front-line service staff.”
Yet clearly, if parliament passes legislation requiring minimum sentences for certain crimes, then that is mandatory sentencing. Just last week the Country Liberals’ leader Terry Mills reiterated that the “clear choice on crime” his party is offering includes “a three-month minimum sentence for anybody convicted of an aggravated assault on workers who provide a public service”.
A minimum sentence is a mandatory sentence. It takes discretion away from judges; for the category of crime that it covers; no matter what the circumstances are, the judge must impose the  prescribed penalty on the convicted person.
Mandatory sentencing does continue under the Labor Government, most notably for murder which attracts a minimum 20 year sentence (reduced from mandatory life in 2005).
Under the last CLP Government mandatory sentencing targeted property crime. The party’s focus may have shifted to crime against the person or a certain category of person, but it clearly does still see a role for mandatory sentencing.
Apart from this, law and order issues received only minimal attention at the forum and alcohol measures, even less. The focus was much more on economic development, perhaps not surprising given that the forum had been organised by the Chamber of Commerce.
The responses from candidates of all stripes in this domain were noteworthy for their lack of a single precise proposal for infrastructure development. This was despite a focussed question, prepared by the Chamber following a business survey. It said: “Can you please advise your view on what infrastructure development is needed in Alice Springs as well as the Growth Towns as that will assist in the economic development of the region?”
Mr Giles spoke of his party’s decentralised approach, including a regional council model replacing the shires, investment in housing on outstations ($5200 per dwelling), re-engagement in Asian relations, the establishment of a Tourist Commission “owned by the industry”, and an “alignment” of the Indigenous Land Corporation, the Aboriginal Benefit Account, and Indigenous Business Australia to get better infrastructure investment in remote communities. 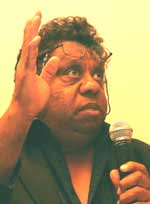 Ken Lechleitner, for the First Nations People’s Party (FNPP) –  he has yet to decide in which electorate to stand, Braitling or Greatorex – spoke emphatically all evening about the necessity for Aboriginal lands to be used as collateral for economic investment and development of joint ventures. This is allowed under Section 77A of the Land Rights Act, he said, which provides for traditional owners’ consent [ED: “as a group, to a particular act or thing”]. However, he did not get specific about what kind of ventures could be envisaged. On the question of tourist ventures, he said that “most of us” have never been tourists: “Give us the opportunity to have a look at what is the expectation of being a tourist and then we may be able to provide,” he said. It wasn’t clear who would be required to do the giving of the opportunity.
When discussion returned to the possible sale of Aboriginal land, Mr Lechleitner said that’s what would make for “sound business”. Labor’s Rowan Foley referred to the Section 19 leases that are available under the Land Rights Act – “normally for 20 years or less” so that consent of the Minister is not required. He also said that “technically” 99-year leases are available. [ED: 99-year leases are commercially attractive and the foundation of land tenure in the ACT, for example.]
Deborah Rock for Labor read out the record of the Henderson Government’s expenditure on infrastructure, including the aquatic centre and upgrades to schools. But, like the Country Liberals, neither she nor her colleagues had any kind of specific promise or even aspiration for the future up their sleeve.
Phil Walcott, independent for Greatorex, stressed decentralisation; Colin Furphy,  independent for Braitling, wants to see more effective marketing campaigns for tourism which will benefit the whole economy.
Barbara Shaw for the Greens (in Braitling, she has decided) spoke in general terms about the infrastructure needs “out bush” being identified by the people who live there.
No-one mentioned the Growth Towns. Despite the Chamber’s question they remain out of sight, out of mind.
During questions from the floor, Mayor Damien Ryan asked the major parties about their plans for retirement facilities in Alice Springs.
Mr Giles said the Country Liberals’ proposed Planning Commission would be looking at all infrastructure development needs and seeking to engage to private sector in the necessary investments. No commitment.
Labor’s Adam Findlay said a Labor Government will gift land to a private developer of a facility for self-funded retirees. A commitment.
The Country Liberals got an attempted drubbing from a man on the floor over the Intervention. He wanted to know what the party’s policy is, having raised it at their Sunday markets stall and having been told that it was a federal matter.
Robin Lambley tried to answer him in terms of their policy regarding child protection. He wasn’t going to have a bar of that, interrupting her more than once, refusing a “political answer” and concluding that the Liberals don’t have a policy.
Mr Lechleitner made comment about the tarring with the same brush of all Aboriginal men as child abusers, but said the Intervention has done some good in some areas.
Peter Solly of Tourism Central Australia wanted to know what the Country Liberals’ Tourism Commission would look like and what Labor would do to ensure that the industry has a greater voice.
Ms Rock replied sweetly that “as general manager of Tourism Central Australia, you are our voice” and that a Labor Government would look forward to continuing to work closely with him.
Mr Conlan said that the proposed  Tourism Commission would be a “stand-alone” body, “at arm’s length from government”, not “enslaved” to the Department of Business. He referred to the “fantastic campaigns of the ’80s and ’90s”, disrupted by the Martin Labor government in 2005. Tourism is a huge part of the NT economy and Central Australia should be it’s capital as the industry here operates 365 days a year, he said. That was as specific as it got.

Mr Foley attempted to make mileage out of recent cuts to the public service by conservative governments in the eastern states, particularly in Queensland. The CLP have foreshadowed a similar approach with their promise to cut waste, he said. We should be wary in the NT and as “we all rely on government dollars to one degree or another”, he said, and “the economy starts at home and that’s your wage packet”.
Shifting the emphasis back to making money, rather than simply receiving and spending it, Dallas Frakking on the floor wanted to know what the candidates would be doing to sort out the blockages to development on the Melanka site. Would they go to Queensland (where the site-owners are based) to help get the development off the ground?
Mrs Lambley broadened the focus in her reply, stressing the huge Territory debt ($3 billion currently), and the Top End focus of the Labor Government’s approach to economic growth, with no significant projects “south of Berrimah Line”. She returned to the issue of public service cuts, saying that only those on salaries of more than $110,000 and not in essential services would be looked at.
Ms Rock again cited a list of Labor Government investments in Alice Springs, such as the hospital upgrades and the future redevelopment of the Greatorex Building for use by police. With regard to the Melanka site, if she gets into government, she’d love to get on a plane to Queensland, she said.
The Country Liberals will also “get over there”, said Mr Giles, describing such smoothing of the creases as “the job of government”.
Photos from top: Adam Giles makes an impassioned point. To his right are fellow Country Liberals Robyn Lambley and Matt Conlan. Nearest to the camera are (from right) the Greens’ Barbara Shaw and Evelyne Roullet. The moderator, the ABC’s Rohan Barwick, is at far left. • Deborah Rock in full flight with fellow Labor candidates Adam Findlay (at right in the photo) and Rowan Foley. • First Nations’ Ken Lechleitner makes a point with feeling.• Colin Furphy (independent)  gets a laugh from Edan Baxter (First Nations, at left in the photo) and Phil Walcott (independent).