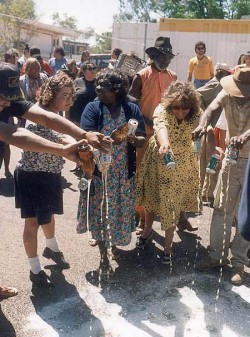 The total wholesale supply of all grog measured as pure alcohol has reduced in Alice Springs by 12% between 2004 and 2011, according to figures from the NT Department of Justice.
Beer went up slightly.
The figures do not include alcohol obtained by mail orders or online purchases obtained from interstate which, according to anecdotal evidence, are increasingly popular.
The most significant drop was in the supply of wine casks and fortified wines, coinciding with sales restrictions and price increases.
Casks rose four-fold from 34,000 litres (expressed in pure alcohol content) in 2004 to 135,000 in 2005 and 2006, but had dropped to 23,000 litres by 2011.
Fortified wines dropped from 174,045 litres in 2004 to just 781 litres in 2011, the major fall being in 2007.
Meanwhile bottled wine sales nearly doubled from 39,000 to 62,000 litres.
Since 2005, total wine sales have fallen from 42% to 19% of wholesale supply.
From 2010 to 2011, the total supply of pure alcohol including in cider (which doubled), wine, spirits and beer decreased by 4%, while the estimated residential population decreased by 1%.
Cider shows an increasing trend since 2004, growing at a compound annual rate of 9%.
Since 2008, cider supply has increased by 74%.
See also Letter to the Editor from Dr John Boffa, from PAAC.
Photo: Campaigners against alcohol abuse tipping out grog in Alice Springs in 2007.