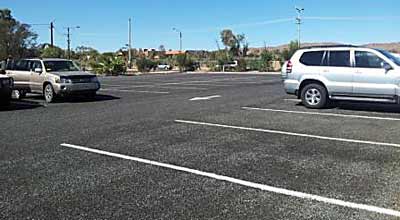 Eastside resident Charlie Carter says locals are up in arms about the Alice Town Council’s apparent plans for turning another section of Ross Park into a carpark.
He says there has been no consultation with any of the residents adjacent to the park although the area (see photo above) has already been opened up for cars and sections have been roped off.
But council Director of Technical Services Greg Buxton says discussions “with all parties” – including residents – are under way and the use of the area is, at this stage, only a trial till the end of the season.
This is contested by park user M’Lis Scott who says she took these photos of the car park on the south eastern end of Ross Park on Saturday, June 23 at 12 noon “when soccer and netball was in full swing.
“I am there every Saturday as my daughter plays soccer at this time. Contrary to what Mr Buxton says, there are many car parks available in this car park – it is definitely not full every Saturday,” says Ms Scott.
“It is not being fully utilised at all. This is a large recently upgraded car park which needs to be used rather than a grassy treed area of Ross Park!”
Under threat is a small, 150 by 40 meter section of the park, most of the rest of which is used as sporting fields for football (soccer), netball and cricket.
The proposed new carpark, for people frequenting netball, is not far from a little used existing carpark at the south-eastern end of the complex: “It’s not a long walk from there to the netball courts and players could use the commute as a warm-up,” says Dr Carter. 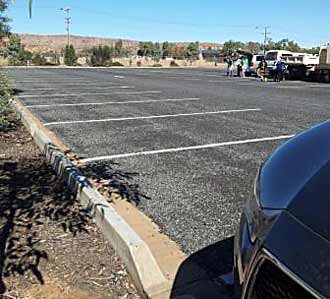 He says the access to the proposed carpark is via a lane and adjoining residents would be inconvenienced by increased traffic.
Dr Carter says the area, grassed and with trees and shrubs, is the little left of Ross Park for people just going for a walk, without engaging in sport.
He says so far as he knows, the council has not made a systematic survey of people in the suburb.
Anyone who asks is told by the council the parking area is just an experiment, he says.
Mr Buxton says: “We are trying to find a way for the netball supporters to park legally.”
He says the carpark at the south-eastern corner is full when netball and football is played at the same time, which is the case every weekend during their seasons.