No intention of fighting Liam Jurrah, victim tells court, but another witness puts nulla nulla in the victim's hand

Basil Jurrah, alleged victim of an assault causing serious harm, with which Liam Jurrah (at right) and his co-accused are charged, in his evidence today mostly stuck to his guns that he had no intention of fighting at Little Sisters camp, and was unarmed.
However cracks appeared when the trouble underlying the on-going feuds amongst the Warlpiri families of Yuendumu was mentioned.
He went to Little Sisters for “smoke and grog”, Basil Jurrah told the court. He denied getting weapons before he went.
Was it a lie that he had a machete in his hand, asked Jon Tippett QC, representing Liam Jurrah, in cross-examination this afternoon. Yes, said Basil Jurrah, who is at present in custody.
He agreed a fight took place and that he had seen Liam Jurrah and his co-accused Christopher Walker at Little Sisters, but to the proposition that he tried to fight Liam Jurrah, he said “I had no weapon”.
He admitted that Esau Marshall (who appeared as a witness yesterday) came with him from Hidden Valley but denied that he had a nulla nulla (fighting stick) and repeatedly denied that they were intending to fight.
The crack came when Mr Tippett raised “the trouble at Yuendumu” that involved “Kwementyaye Watson” [the young man who died at Warlpiri Camp in September 2010]. Mr Tippett suggested Basil Jurrah was angry about the trouble.
There was a long hesitation. Mr Tippet repeated the proposition that he was angry,  and it was translated by Ned Hargraves, the court interpreter.
“Yes”, said Basil Jurrah.
But he again denied that he wanted to fight the enemy family.
Mr Tippet named the enemy as the Walker-Granites family. Basil Jurrah agreed but again insisted that he had gone to Little Sisters for grog.
“You hated Liam Jurrah” because of the problem with Kwementyaye Watson, said Mr Tippett.
No, said Basil Jurrah.
“Rubbish!” said Mr Tippett, suggesting that he was blaming this man – indicating Liam Jurrah – “for nothing”.
The broadness of this proposition was objected to by prosecutor Steve Robson and at this time there were mutterings and apparently gestures in the public gallery. Magistrate David Bamber asked that people sit still and make no comment.
Mr Tippett resumed his line of questioning: Kwementyaye Watson’s family were blaming the Walker-Granites families for his death.
At this Basil Jurrah spoke to Mr Hargraves, who explained the difficulty Basil Jurrah was having with the questions, related to his “obligation”.
Mr Tippett suggested that it was his obligations that had taken him to Little Sisters camp. Basil Jurrah agreed. And as a result of those obligations you intended to fight and hurt the Walker-Granites mob, suggested Mr Tippett. Yes, said Basil Jurrah.
You intended to blame people in that mob for the fight that happened.
Again there was a pause and Mr Hargraves translated.
Basil Jurrah said in response: “I seen Liam Jurrah and Christopher Walker with my own eyes.”
He denied that people had told him that they were there.
“I know his face,” said Basil Jurrah. 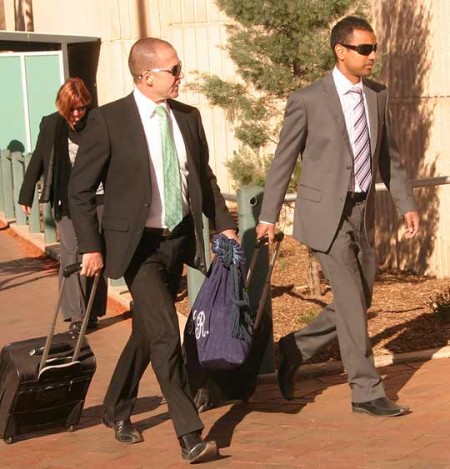 In subsequent questioning he again denied that he intended to fight and that he had armed himself, but later agreed that he had been involved in the fight at the back of House One, that he was injured in this fight, that it involved “heaps of people”, that he was drunk, specifying through Mr Hargraves that he was “half shot”.
The last witness of the day was Douglas Watson, also a prisoner. His evidence was that five carloads of people went from Hidden Valley to Little Sisters, fired up, with weapons and ready to fight. He said Basil Jurrah was armed with a nulla nulla. He didn’t see anyone armed with machetes but people had iron bars and boomerangs as well as nulla nullas.
Mr Tippett put to him that they had “smashed the enemy at House 1”. Mr Robson objected but he did not return to the subject in re-examination.
Mr Watson agreed that he was in the fight and that he had a nulla nulla but said he had not hit anyone.
He agreed that the enemy was the Walker-Granites mob.
When the police came, the Hidden Valley mob got rid of their weapons in the scrub, he said.
The hearing continues, with two further witnesses to be called tomorrow. The defence asked for an early hearing so that Liam Jurrah could catch an 11.25 am flight back to Melbourne (apparently he can’t get on a flight on Thursday). However this is not possible.