As the court adjourned for lunch on the second day of the committal hearing of charges against star footballer Liam Jurrah and two others, cross-examination had begun of Basil Jurrah, the alleged victim of their assault causing serious harm charge.
Judging by their demeanour, this testimony is of critical interest to the defendants. Liam Jurrah, for the first time, was leaning back in his chair, craning to see the witness and intently listening to his answers. His co-accused Josiah Fry did the same.
In his evidence in chief, elicited in part orally by prosecutor Steve Robson (in contrast to all other witnesses this far), Basil Jurrah said he saw Liam Jurrah and co-accused Christopher Walker at Little Sisters Town Camp with a group of “probably about 27 or 30” other people. Mr Walker was at the front of the group, Liam Jurrah at the back, separated by a distance of about five metres. He said they were “running” and that they were “chasing me”. 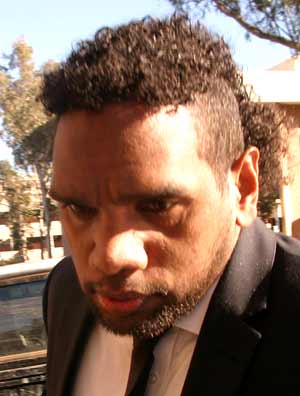 Mr Robson asked where he was hit by Liam Jurrah. Basil Jurrah showed the top of his head, slightly to the right. What did he hit you with? A machete. Did Christopher Walker hit him with a small axe? Yes. This time he pointed to the other side of his head.
Mr Robson repeated details of Basil Jurrah’s “story” [statement] to police, that Liam Jurrah had hit him repeatedly to the right leg, on the right thigh, to the rear of the right ankle. What with? A nulla nulla.
The attack stopped when, according to his statement, he was “saved” by Ronald Martin.
In cross-examination, where the clear intention was to challenge the reliability of the testimony, Mr Tippet started early in the day of March 7. Basil Jurrah agreed that he started drinking at Todd Tavern before 12, after which he bought take-away alcohol and took it to Hidden Valley, travelling by taxi.
He later went to Little Sisters. Mr Tippett tried hard to get Basil Jurrah to admit that he went to have a fight, but this was resisted: it was for a social visit to an aunty living there.
He got to Little Sisters in a Toyota. There were three people in the car and it stopped in the camp.
This cross-examination will continue this afternoon.
The court also heard from witnesses Samuel White, Ingrid White, Frida Jurrah and Philomena White.
Philomena White agreed with Mr Tippett’s proposition that Liam Jurrah was defending himself in the fight with Basil Jurrah. She was watching from inside House 1, in a lighted room. The only light outside was the light from that room, she said. She agreed that she saw Basil Jurrah with a machete and that one of the people he was trying to hit was Liam Jurrah.
So Liam Jurrah was defending himself? Yes. And some other people came to fight Basil? Yes.
She said the fighting stopped when she called police and told her grandmother that they were coming: “Everybody ran away”.
Samuel White also agreed that he had told police that Liam Jurrah was “just arguing” with Basil Jurrah.

Photos: Top – The grassy knoll opposite the courthouse, where yesterday an angry crowd had gathered, was a scene of peace and quiet this morning. Middle: Liam Jurrah. Below: Interstate cameramen from the three commercial TV networks had a quieter day until tensions between feuding Warlpiri families built later this afternoon.