Home Issue 28 Thanks for more 'us and them', Ms Macklin and Mr Snowdon
Issue 28Issue 29Volume 19

Thanks for more 'us and them', Ms Macklin and Mr Snowdon 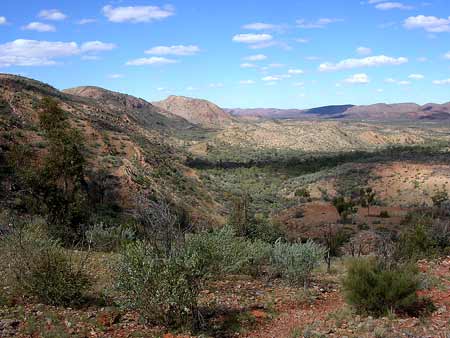 The West MacDonnell Ranges National Park, which belonged to all of us, which for many of us underpins our livelihood, and for quite a few of us is the very reason why we’re here, will today pass into the ownership of a minority.
Federal Indigenous Affairs Minister Jenny Macklin will be presiding at the ceremony. Warren Snowdon won’t be far. We’ll hear the usual litany of reasons, about rectifying dispossession, maintenance of culture and lots of new job opportunities (as opposed to new jobs). But can we rectify dispossession with another kind of dispossession?
Today, with roughly half the landmass in the Northern Territory handed back to traditional owners, can we really argue that the further handover of public assets like a national parks will ameliorate traditional owners’ condition?
Public ownership of certain assets provides some of the glue that holds our society together. If it’s virtually wiped out in Central Australia what’s left to do that?
Well done, Ms Macklin and Mr Snowdon.
Some media will dutifully report this “event”.
What we are unlikely to hear are the answers to the following questions:-
Why has the handover continued in the face of vigorous opposition from people of Alice Springs – until they realised that yet again, their voices would not be heard, their questions, not answered? (Google this site for extensive coverage of the NT Government’s and the Central Land Council’s roles.)
Why has the handover to Aborigines of other parks, and previously half the landmass of Central Australia,  failed to halt the relentlessly worsening of their condition?
What have they done to enhance, for the benefit of the region’s people and its economy, the amenities of their newly acquired properties? (We have asked the parks service’s media section and will report the reply.)
Why is the taxpayer still paying for the running and the maintenance of what is now their priceless property – for which they receive rent? Is this rent being used to create for themselves and their children a stake in the economy, some kind of enterprise, or is it yet another form of sitdown money?
Why are former cattle stations converted to Aboriginal freehold mostly run down and unproductive, except when non-Aboriginal cattlemen lease them? Ms Macklin will hand over two more of them today.
And perhaps most distressingly, why have these exclusionary and constantly failing policies been allowed to scuttle what could have been a great opportunity for black and white, as the joint owners, working hand in hand, developing the magnificent West Macs into an even greater source of pleasure and commercial opportunity, making the park a symbol of harmony and mutual respect?
Instead Ms Macklin and the Territory government have created yet another “us and them” situation.
It’s a sad day for Central Australia.