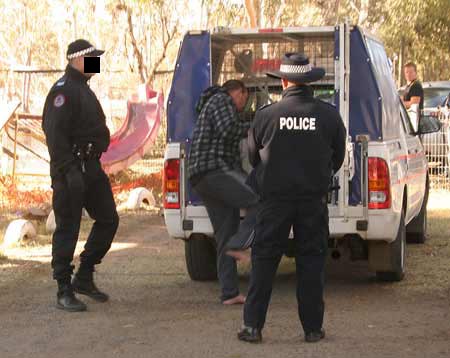 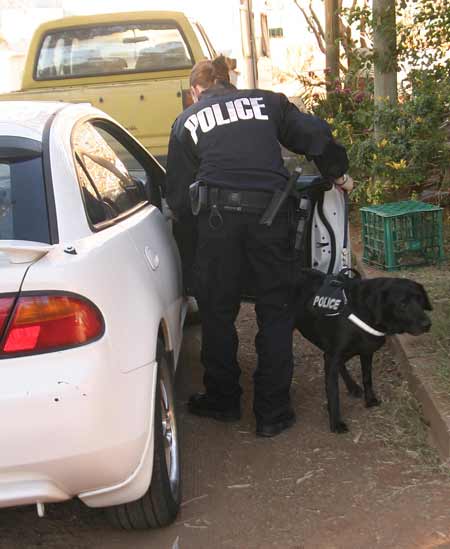 About 30 police officers including drug squad detectives and a sniffer dog handler raided the Palmer’s Camp in Basso Road this morning.
They arrested three men in three separate houses and confiscated drugs as well as cash.
The Aboriginal town camp has been under police surveillance for some time and was known by users as “the Maccers Drivethrough”.
Police are expected to make a statement soon.
They arrived at the camp about 8am in 12 vehicles and “secured” the area, stopping residents from leaving it.
Houses, yards and vehicles were searched as residents and their children looked on.
Some of the police officers were wearing bullet proof vests and all were armed with pistols.
A female officer and her sniffer dog checked houses and vehicles.
When they emerged from one house the dog had a white cloth in its mouth – the reward for finding drugs.
The News understands that the buyers of drugs included local teenagers and visitors from bush communities in town for football matches.
Some residents of the camp have told the News they were concerned about the dealing and the effect it had on their children.
One resident this morning expressed relief about the police action.

UPDATE JULY 12:
Detective Senior Sergeant Travis Wurst said today: “As a result of an operation which spanned several months, Police have arrested several people and seized thousands of dollars worth of cash relating to drug offences in Alice Springs.
“The federally funded Southern Substance Abuse Intelligence Desk (SAID) has taken decisive action against the supply of cannabis into Alice Springs town camps, launching Operation Caesar.
“Up to 32 Police Officers were involved in the operation, which included members from Southern SAID, Southern and Northern Dog Operations Units, Southern Investigations and Alice Springs General Duties.
“Police executed four search warrants simultaneously yesterday in Palmers Camp and one at a residence on Todd Street.
“Following the search, four people were arrested for supply and possession of cannabis in an Aboriginal community. Another man was summonsed to appear at a later date for possessing a controlled weapon.
“Police also seized $4,500 worth of cash, believed to have been obtained from the sale of drugs.
“The Substance Abuse Intelligence Desk will continue to work closely with other sections of the Police Force to dismantle these networks of offenders who try to profit from selling illegal and harmful substances in remote communities.
“I urge anyone contemplating trafficking drugs or alcohol anywhere in the southern region of the Territory, to think again. Police will continue to be out in force and you will more than likely be apprehended,” Detective Senior Sergeant Wurst said.

UPDATE JULY 14:
Police have arrested another person, a 43-year-old male, for drug offences. Det Wurst said yesterday the man was arrested during a search on a house in Anuera Place. He was charged with supplying cannabis 9three times) and possession of cannabis.
He said: “Police urge anyone who may witness any suspicious drug related activity to contact them on 131 444 or Crime Stoppers on 1800 333 000.” 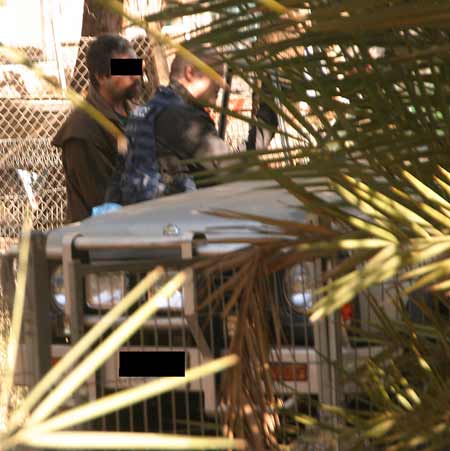