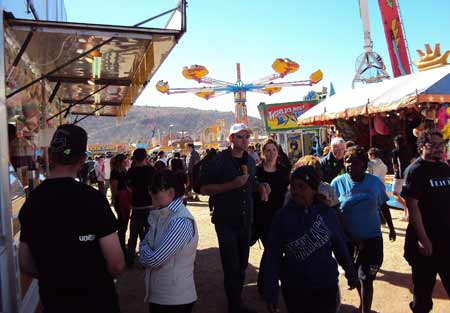 A massive crowd of 12,000, about 30% more than usual, was at the 53rd Alice Show on Friday, says Show president Brad Bellette. This makes it the town’s biggest social event of the year. And there were more stalls and commercial displays – 250, an increase of 20. Onya, Show Society!
• • •
The unexpected huge attendance caused shortages of food, loose change and dunny paper planned for the two-day event but which started to run low on Friday.
And the mother of all traffic jams occurred on Friday on all roads feeding into the Gap roundabout. The absence of the usual police traffic control created a bottleneck as cars had to turn right, obviously giving way to oncoming traffic, into the landfill road and from there into Len Kittle Drive and the show grounds. The cops were there on Saturday, when there was much less traffic. We asked the police for comment.
• • •
Another absence was Tourism Central Australia. For the last two years they had used one of the major display areas, between the Alice Town Council and the Country Liberals’ stalls, after – inexplicably – the Parks and Wildlife had ceased using the space. Both organisations have obvious links to the region’s biggest private enterprise industry, tourism, and their absence was a puzzle for many.
The Alice News has sought comment from Tourism CA which told Mr Bellette “it is not a tourist event”. What about an event where locals can learn what tourism is doing for the region (and what they can do for tourism)? We were also trying to talk to Minister for Parks and Central Australia Karl Hampton about this (and other issues) but he did not respond to our request. Accountability, Labor Party style? 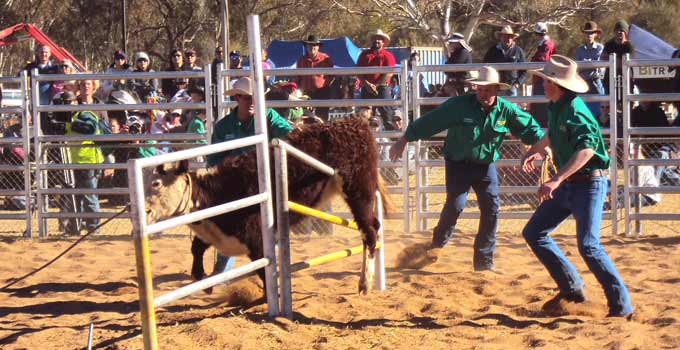 • • •
The rest of the Show was all systems go. The side show alley was packed, kids squealed with delight – or horror? – being zapped aloft in breath-taking rides.
Cattle station folk were in town in droves after a good season and a big sale on Thursday (see report this issue).
• • •
The Bronco Branding display again showed that handling cattle in the good old days was a fairly exhausting business. Two teams from Strathalbyn in SA did well, after a 19 hour drive. One calf had to be destroyed when it broke a leg. It’s a pity this happened but a vet was on hand to do it humanely. Some may try to turn this into a reason for stopping the Bronco Branding exhibition at the Show. I hope the event stays. It’s no difference to nags getting hurt in horse racing. And it is one of the few days in the year when the cattle men and women are in town in force.
Results were T&R # 1 Team (from Strathalbyn) 4 min 30 sec; Robbie Schmidt’s Team Landmark (pictured) 4 min 47 sec; Mt Riddock Station Team 5 min 32 sec and T&R # 1 Team 6 min 17 sec.
• • •
Picture below: Lucy Doyle on Pseudonaja starred in the ring events. Lucy was the Senior Champion Show Jumper for 2012. 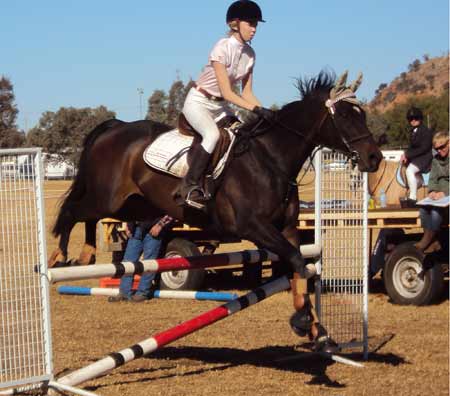