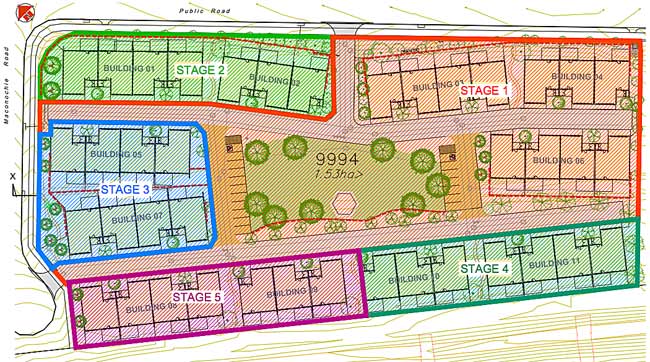 The Department of Defence is making an application to build a gated community with 40 three-bedroom “multiple dwellings” worth $20m, not counting the cost of the land off Stephens Road.
If approved the complex will be built in several stages (see plan above).
It is understood the proposed complex, on land developed by Lhere Artepe Nominees Pty Ltd, which is linked with the native title organisation Lhere Artepe Aboriginal Corporation, is for Pine Gap staff.
The land, at the foot of the MacDonnell Ranges and not far from the convention centre, has a frontage to Maconochie Road of 89 metres and 171 metres frontage to a new road yet to be named.
The application, to be heard next week, says the proposed units will have a maximum building height less than 8.5 metres and all 40 units will be double storey.
About 2,442 square meters of communal open space will be incorporated into the development and a proposed perimeter fence will provide screening to “avoid undue overlooking of adjoining properties”.

UPDATE ON MONDAY 3.30pm
The Australian head of Pine Gap, Margaret Larkin, says the project is part of an ongoing “modernising of the housing fleet”.
She says some homes in other parts of Alice Springs will be sold but it is not yet clear how many.
The number is likely to be “in the tens,” the replacement will not be one for one (there are 40 dwellings in the proposal) and will depend on the turnover rate of the base workforce and the composition of the families.
Ms Larkin says creating a gated community is not a response to the law-and-order conditions in the town, but rather to “create a sense of community” and to prevent children becoming victims of accidents on the busy Stephens Road.
The complex will be surrounded by something that’s more a fence than a wall but the gate will be locked at all times – not unlike it is the case with apartment buildings.
Ms Larkin says the owners and developers of the land, Lhere Artepe Nominees Pty Ltd, had accepted an offer from the Australian Department of Defence and the sale is now being processed.
Ms Larkin said she did not know the price to be paid.