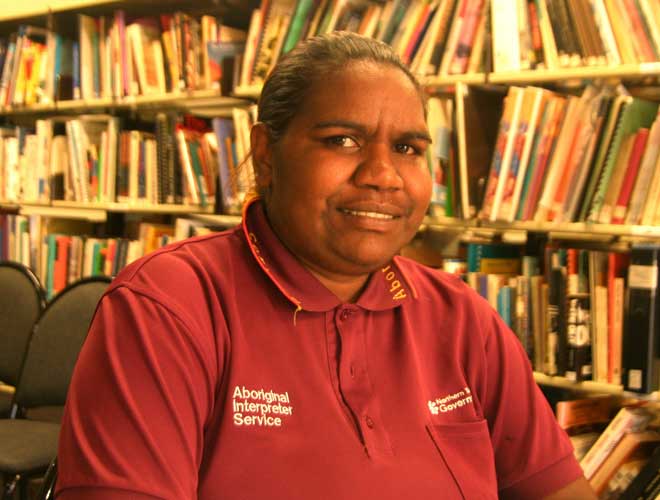 Sharona Richardson, Western Arrernte interpreter with the Aboriginal Interpreter Service. Below, back in 2007 when she was staffing the Centrelink Agency at Tjuwanpa.

I first met Sharona Richardson in 2007 when she and another young local woman were staffing the Centrelink agency at Tjuwanpa Outstation Resource Centre, just outside Hermannsburg where she’s from. I couldn’t help but notice her again when she stood up at IAD’s First Friday series of presentations and confidently spoke about the interpreters’ code of ethics, emphasising the professionalism of the Aboriginal Interpreter Service for whom she’s working now.
Back in 2007 I’d been struck by her initiative – a feature of her working life was that at one stage she had gone off to work in a tuna factory in Port Lincoln. And at the time, with the encouragement of the local police sergeant, she was considering taking a job as an ACPO (Aboriginal Community Police Officer).
She told me on Friday that she did begin the training but a five-year-old incident that had given her a record prevented her going further with it. Meantime the shires had been established and their night patrol programs were underway.
“The sergeant looked at me again,” she said. She became team leader for night patrol at Hermannsburg, staying in the position for a year.
She left because she was expecting a baby. She has spent most of her life between Hermannsburg and Alice Springs and moved back to town for the birth. A healthy boy arrived in August 2009 and she called him Mathias.
“I thought, ‘I’ve got a baby, now I need a  job’,” she recalls. She had already done six months’ training as an interpreter at IAD (Institute of Aboriginal Development). She heard that the Aboriginal Interpreter Service had vacancies and they took her on as a casual.
Then a full-time permanent position came up as a community-based interpreter. She’s being supported to finish her studies, a Diploma in Interpreting, attending Batchelor Institute two days a week. For the other three days she’s on call to attend wherever interpreter services are needed, including at the courthouse if no other Western Arrernte speaker is available.
That must be difficult, I suggest, you can’t ask the lawyers to slow down …
“We have every right to!” she cuts in. “And we can ask them to explain in plain English when they’re using jargon.”
She finds interpreting the police caution the most difficult task: “It’s hard for the client to understand, and they often ask the interpreter to explain. But we are not allowed to, we can’t take sides, we are just the person in the middle.”
Another challenge is interpreting in the mental health unit at the hospital, “but you get used to it, you’re professional at it.” 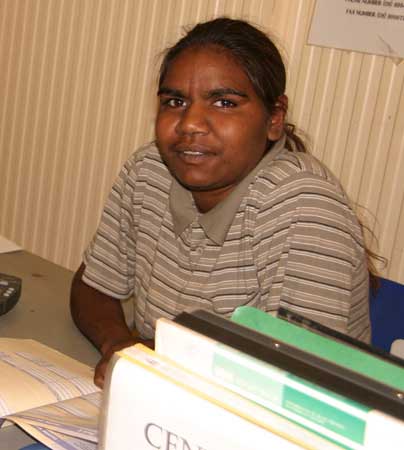 So what prepared this young woman for the world of work that she is so actively exploring? Her primary schooling was done between Hermannsburg and Yipirinya in town, and for secondary she went to Yirara, completing Year Nine.
An early, important experience seems to have been helping out, during school holidays, at Injartnama Outstation when it was used for petrol sniffer rehab. Elva Cook, who ran the outstation with her late husband, is her grandmother’s younger sister. Sharona recalls the success of the girls’ softball team from Injartnama when they competed at the Papunya Sports Weekend: “I was so impressed with the softball players. They came second in the grand final.” This was more than a decade ago.
Sharona speaks with great fondness of her grandmother without naming her. Another of her sisters, May Lockyer, made her welcome when she moved into town at the age of 18 and it was May’s daughter Lisa who “pointed out IAD”.
“She told me I should do some studies to get myself a job.”
That’s when Sharona did her first bout of training as an interpreter, but she missed the bush and her big family network and the availability of work for a competent young woman meant that she could easily move around. For a while she lived at Wingellina, with an uncle, and worked in the council office there.
Her family, including the boy’s father, look after Mathias while she’s working. She’ll finish her diploma and stick with the interpreting until he gets a bit older. And then, who knows? It’s a big world out there…