When heating takes more than the flick of a switch

The weather forecast last week predicted some fairly cold weather with nighttime lows down to a terrifying zero. This got me to thinking (perhaps dramatically) about humankind’s development as a struggle against the elements in a constant search for optimal temperature comfort. From palm fronds as fans to campfires for warmth to huts and heaters, buildings and air conditioning, I was entertaining a different paradigm from which to view the history of the whole world through!
Melodramatic, you may think, but picture this: coming home from work one afternoon so cold I found myself sitting on my bed wrapped in a blanket holding my cat. I sat there thinking all this through and wondering how to get some wood. 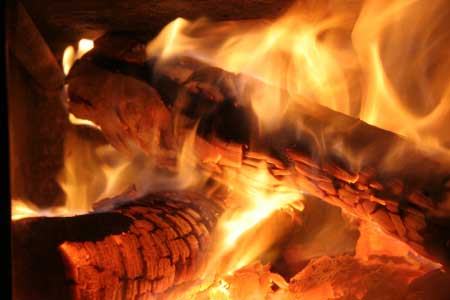 Now I had earlier in the week phoned around and found prices for wood too expensive. I had been up the back of the hill and gathered what I could that didn’t need a chainsaw. Following that I had a friend drop by and make short work of a branch in the back yard. That lasted all of two nights and then we were back out on a limb, if only it were of the flammable kind. I had even gone so far as to break up some old chairs in the back yard, which got us through another night. But that afternoon sitting with my cat, strategically facing her towards me so as to also profit from her hot breath I had a completely unsustainable temperature situation. Sooner or later Kalua was going to get bored or hungry, in fact sooner or later I was going to get bored and hungry and be forced to move.
I decided on my course of action and looked up Kennards hire. Hire a chainsaw. I hoped they would give me a little 101 Chainsawing for Beginners and I would head back to the hill, get my wood, stoke up that fire and be done with it. The price of the chainsaw hire wasn’t much less than a trailer of wood but anyway it was too late to organize a delivery for that night and the day was fading fast with the predicted temperature of zero degrees fast approaching.
At Kennards I met a bloke who was cutting up a whole load of wood for the Finke. He cut me up some wood to last the next few days till he could do up a trailer load. There is a whole lot more involved with independent heating rather than just flicking a switch. It’s sourcing, splitting, unloading, stacking, getting kindling, stoking and waiting for that warmth to seep through the house.  Anyway, I’m stoked and the fire is too.
So I’ve been waking up warm and cosy though I do wince a bit at getting out of bed early in the morning. But as I cross the river on my way into town it’s bloody freezing and mixed in that frozen air is the scent of fires being lit for a billy and warmth and I wonder how the people camping in the river slept. In the summer I didn’t think of them as often unless it rained, and when the river flowed, the hospital and hostels overflowed. I guess as it gets colder that story will be told more often and whilst I’m all tucked up and warm I wonder what I can do if people’s bedding can still be ‘confiscated’.