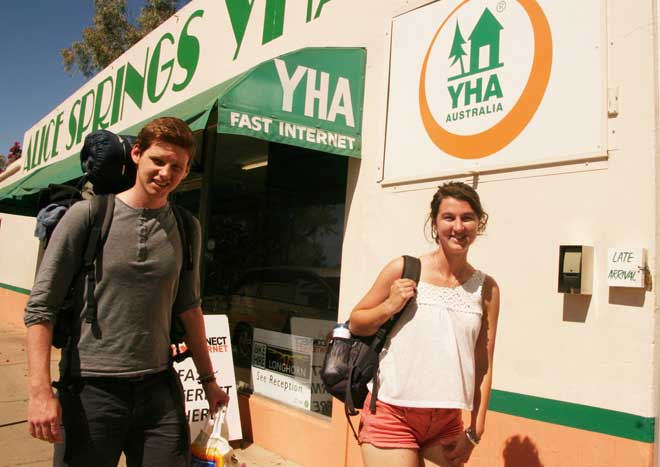 Backpackers Zoé Mulliez and Maxime (Max for short) Delattre, political science students from Rennes in France, ignored poor advance publicity about Alice Springs and decided to make it part of their Central Australian visit earlier this month. Introduced to them by a mutual friend, the Alice Springs News Online asked them to write a frank account of their experience, why they had come, what they had found, and what they thought about it on reflection. It’s not all pretty but the good news is that they still want to come back.

After a one-week journey that had taken us from Sydney to Adelaide, we were getting ready to our next step: Alice Springs. As European backpackers and through our different connections in Australia, we had received several feedbacks about the city which were, to say the least, fairly derogatory. Were we only content with the impressions we had heard, we would have expected to come across a ghost city inhabited by an Aboriginal community believed to be hostile to white people. However, Alice Springs, well known by travelers to be a stop-by city to access the Red Centre, sounded anyway attractive to us. We really wanted to get an understanding of the life-style of the inhabitants of the Outback as well as the Aboriginal culture and this way, be able to form our own opinion.
To get to Alice, we had chosen to take a train-ride and jumped for a twenty-six hour journey aboard the famous and historical train, the Ghan. We enjoyed the whole trip, especially getting to bed watching the sunset in Victoria and waking up surrounded by the beautiful landscapes of the Outback as first sceneries in the morning. We got to be hosted by locals at our arrival, an opportunity that added great value to our jaunt in Alice. Indeed, the prospect of being told about Alice Springs by people who had been living there for years was really exciting and much more attractive than a classic stay in a backpacker hostel.
‘We felt like our safety was not guaranteed’ 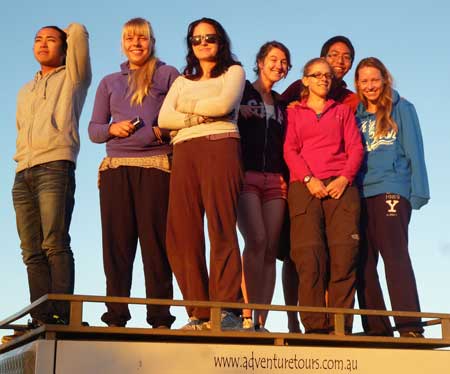 When we first went for a walk on our own in the streets of the town, we had the strange feeling to be for the first time of our lives, on the side of the racial minority. We also felt like our safety wasn’t guaranteed or, to put it in other words, we felt like we were not welcome at all. Then, throughout the days, we were surprised by how few and how little were the interactions between the Aboriginal and the white communities. The gap appeared to us so wide that we happened to wonder whether the Aboriginal people could speak English.
On the other hand we learnt that many people come to live in Alice Springs, even for a short while, to seek for the jobs that the town has to offer and to enjoy themselves in one of the most gifted areas of the country in terms of landscapes and bush walks.
After those first impressions, we made our way to the beginning of our three-day tour in the Red Centre. Starting it in a local backpacker hostel, we noticed that the room was only half occupied. As well, our tour group was composed of only eight people instead of 24, usually foreseen. These things might also have concurred to make us wonder whether the tourism industry was dropping or if in the other hand the supply was increasing.
‘We much appreciated the commitment of our guide’
Once on the tour, while we had previously feared the itinerary and the activities to be far too touristy, we ended up having a great time enjoying the landscapes surrounding the mythic and color-changing Uluru.  Not to mention that we much appreciated the commitment of our guide always ready to teach us about the wildlife, the bush medicine and the Aboriginal traditions. Yet we felt somehow frustrated to figure out why the area dedicated to watch the sunset and sunrise on Uluru was crowded and artificially organized with timetable, boardwalk …
On our way back to Alice, we felt fairly satisfied by the tour and quite excited at the idea of enjoying a last sunset on ANZAC Hill.
It’s a shame that we didn’t get to talk or have any contact with the Aboriginal community while we were in Alice or in Uluru. However we are far from pretending that it was all negative, we just wish we had more opportunity to get in touch with them.
We really enjoyed some galleries along the Todd Mall that feature Aboriginal arts and culture and we had a great time learning about their history and their traditions in the Cultural Centre within the Uluru National Park.
The  sight we had through the Simpson’s Gap on the last day reminded us of the beauty of the MacDonnell Ranges that we didn’t get to climb up and thus, deeply made us feel like coming back very soon to a place that will always remain a source of curiosity to us. 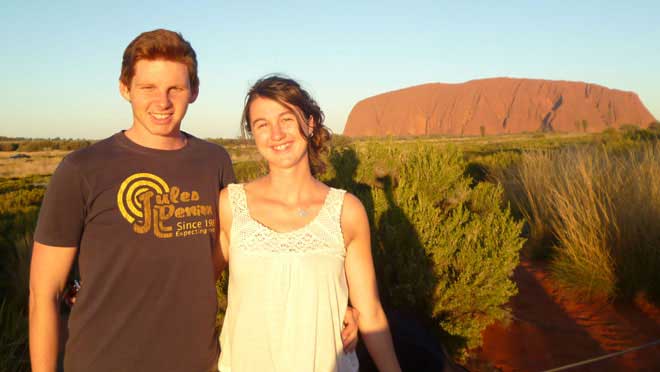