The cockies are back! 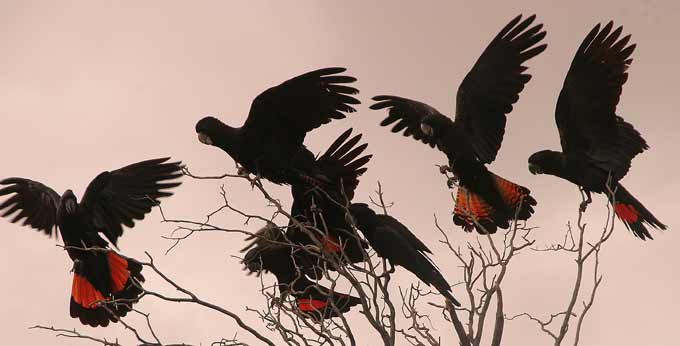 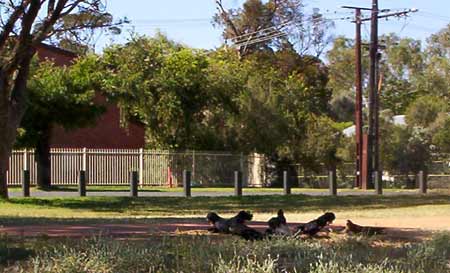 Ken Johnson’s efforts in controlling exotic grasses and allowing native vegetation to re-establish on the east bank of the Todd in town have paid off with one spectacular dividend.
For three days running now, a flock of Red-Tailed Black Cockatoos have been attracted to this area, hanging around for hours at a time. They’re attracted to the seeds (not least the prickles!) which they are munching out on.
I’m fairly sure they first turned up only three days ago, as I walk across the river every day and never noticed their presence earlier. The other give-away of their initial presence was that they caused quite a stir amongst the local crows, which are not used to the presence of black cockatoos in this location. There was a bit of a barney going on! It all seems to have settled down now.
Black cockatoos are a fairly common sight in the rural area but it’s rarer than a blue moon event to see even one or two birds flying over town, as they are wary of people and normally skirt around suburbia. I cannot recall any previous occasion of a substantial flock of these birds actually frequenting an area literally in the middle of town, let alone for a few days.
They may have done so before buffel and couch grass took such a strangle-hold but that would have been when I was a school-boy and didn’t live in town. It’s just delightful!
PHOTO at top (in the rural area of Alice Springs) by ERWIN CHLANDA. Urban cockies by ALEX NELSON.