My last piece was a little gushy at the marking of my first year in Alice Springs. I was in the throes of a busy week leading up to the Wide Open Space festival and was excited to be celebrating the anniversary with my own coffee cart stall, ‘Monkey Beans’. I had caught myself thinking that it was a perfect way to appreciate my seasoned perspective of this place a year down the track. Essentially sentiments of feeling like part of a community were rambling on. Sentiments that I shared with a friend at the festival recalling how this time last year I was wandering around the festival rather bewilderedly. She said, “Yeah, I remember seeing you, you looking pretty lost.” Which for some reason pretty much cut the conversation short! 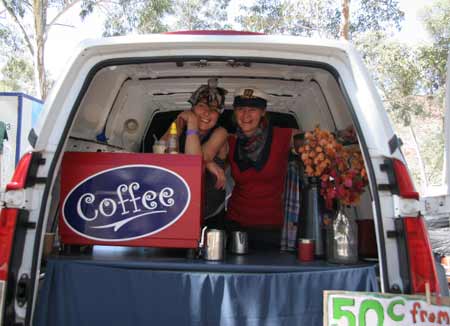 Back to Monkey Beans, that  also served 100% banana ice cream (hence the name!), Moroccan spiced pumpkin and capsicum bread (which I was up till very late on Thursday night baking) and the A-team that made it all happen! I was lucky to have another barista extraordinaire and another enterprising lady who was the face of the stall, a face that quickly became a morning favourite amongst the caffeine in need. Setting up the little stall was like setting up an extension of my lounge room. I found seeing this aesthetic in the amazing surrounds of the Ross River intensely gratifying.
Driving out to the site I couldn’t help exclaiming at how green the whole place had become. My friend from Sydney felt a little ripped off, her last visit to the Red Centre had been just that, red. The first night out there I forgot to include my boots and jacket in the swag and I awoke to frozen jacket, boots and icicles all over the canvas top. The late nights and very early starts in such a beautiful place combined with a great bunch of friends as colleagues and punters just seemed to make the ‘work’ a whole lot of fun.
Sunday night traditionally reserved for festival organisers, performers and the like held a much broader and captivated audience this year. And though quite a few people left after the sunset and moonrise viewing on the ridge, plenty more stayed on not wanting the weekend to end! By this stage for me though the recipe of late nights and incredibly early mornings (spent lying in my frozen swag guessing at the time by gauging the amount of sunlight that was hitting the hill) meant I had very little energy left over for the dance floor. I instead spent the evening experimenting with a camera, enjoying special company in the amazing landscape under a full moon light. 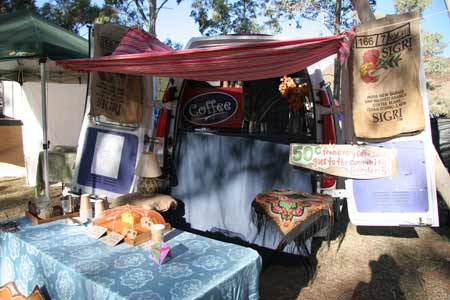 On the last morning a woman with $5.50 in her hand thanked us for not taking advantage of them as a captive audience in a closed market! I guess what I really liked was the liberation and sense of responsibility that comes with working for oneself. I’ve come a way from the experience feeling pretty good about it all. And just quietly if there weren’t already so many cafes in Alice (and probably a hundred other reasons not to) I have entertained little fancies of thought towards the opening of my own shop.
After so much anticipation, so much work and being part of such a fun weekend, it was a little deflating to come back into town. On the up side it was a glorious moment to have a shower and get all the dust out of everything, including my nose. Getting back into the swing of things at work was also a challenge but many of the faces coming for their morning coffees told of a similar feeling, which made me feel somewhat better! For some though – the new arrivals rolling into town just before the festival – their adventures in the Centre are just beginning with many more delights and destinations awaiting them.

Facebook
Twitter
Pinterest
WhatsApp
Previous articleNamatjira: for the man and now the project art was a catalyst for change
Next articleLiam Jurrah on four more assault charges