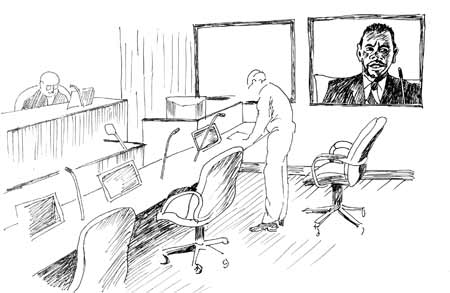 Four new charges have been laid against footballer Liam Jungarai Jurrah, all of aggravated assault, and against four different people.
This was revealed when he appeared in the Alice Springs Magistrate’s Court this afternoon for a preliminary examination on two charges, “unlawfully cause serious harm” and “armed with an offensive weapon at night”.
Defence counsel John McBride told Magistrate John Birch that he was having discussions with prosecutor Stephen Robson about further witnesses, civilian and police, and possibly a doctor.
The court was told that the events, from which the charges arise, in the Little Sisters town camp near Alice Springs’ Heavitree Gap, had involved two groups and most had consumed alcohol.
It is alleged one man was injured with a machete.
Mr Birch granted an application to cross-examine witnesses.
He set down an oral committal hearing for three days, July 23 to 25, and told Mr Jurrah that he would be “required to be here in Alice Springs” for that hearing.
Mr Jurrah today appeared by video link from Melbourne.
The football star from Yuendumu could be seen on the screen, seated at a table, his face expressionless, and wearing a dark jacket and a tie with diagonal red and blue stripes – the Melbourne Football Club colours.
He did not say anything.
Most of the gallery of about 10 people in the small court room were journalists.
Mr McBride asked Mr Birch to vary Mr Jurrah’s bail conditions so he could play football in Darwin, traveling there on July 19 and back to Melbourne on the 22nd.
Mr Birch said he was not in the habit “to vary bail conditions to pursue private matters”.
They are currently: Reside at an address in Victoria; not to contact relatives or any person nominated as a witness by the prosecution in these proceedings, to leave the Northern Territory and return to Victoria on the next available flight and not return to the Northern Territory except to attend Court; and report to the Officer in Charge of Police in Victoria.
Mr Robson said he would not object to the changes requested by Mr McBride..
Mr McBride said Mr Jurrah is a professional footballer.
Mr Birch asked what travel and accommodation arrangements would be made for Mr Jurrah and Mr McBride said he would find out.
Mr Birch said he would deal with the application this afternoon if the court’s business allowed it.
He adjourned the hearing with bail to continue.
Otherwise it was a relatively quiet day for the Alice Springs Magistrate’s Court, with a list of six domestic violence offenders, 10 in the SMART (Substance Misuse Assessment and Referral for Treatment) Court, and 55 accused of crimes.
Some days the court deals with 150 defendants.
Among the notable accused today was Gwendaline Inkamala (Damage To Property; Aggravated assault x 4; Damage To Property  x 2; Stealing; Armed with an offensive weapon x 2; Threatening behaviour in public place; and armed robbery.
Drawing by ROD MOSS. Defence counsel John McBride on his feet, Magistrate John Birch on the bench.

UPDATE 4:40pm: Magistrate John Birch has now varied Mr Jurrah’s bail conditions so he can play football in Darwin on the weekend before his three day oral committal hearing to begin on July 23.
Mr Jurrah will be allowed to travel from Melbourne to Darwin on July 19 “and remain there with a football manager for the purpose of undertaking his employment,” Mr Birch ordered.
“On the July 22 the defendant is to travel from Darwin to Alice Springs with a football manager for the purpose of attending his court appearance on the 23 July 2012.
“While in Alice Springs the defendant is to reside at a hotel and not leave those premises between 7pm and 7am.”
Meanwhile Mr Jurrah’s co-defendant Christopher Walker has been remanded in custody to July 23 for a three day oral committal. The alleged charges are the same as Mr Jurrah’s.