The Pintupi artist Yukultji Napangarti – one of the so called Lost Tribe of nine people whose first contact with the outside world was in 1984 – has won the Alice Prize with a hypnotic untitled work that “elevates paint on a surface to something sublime”.
So said judge of the prize, Nick Mitzevitch, Director of the Art Gallery of South Australia.
“To me that’s what great painting is all about,” he said.

This is the 37th Alice Prize, one of Australia’s oldest contemporary art prizes, open to artists from around the country. Presented by the Alice Springs Art Foundation it opened tonight at Araluen and will be on display till June 10.
Mr Mitzevitch regarded Napangarti’s painting as “by far the most sophisticated and superior work in the exhibition”, and this despite the standard of the prize, and painting in particular, being “generally high”.
He said the work “sums up what landscape painting is really about in the 21st century”, even though it draws on thousands of years of Indigenous tradition. This is because it depicts landscape without the viewer being able to pinpoint where they are. It “denies traditional western notions of landscape” where it would be recognised as such by “common signifiers”, such as a horizon line.
“It’s constantly shifting, constantly intriguing, very rewarding at every glance,” he said, describing the artist as a “fabulous exponent” of optical effects which give the work a sense of infinity.
Yukultji Napangarti and her family occupy a special place in Australian history, being the last known nomadic people to ‘come in’ from the desert, making contact with other Pintupi people in the tiny settlement of Kiwirrkurra in Western Australia in 1984. Her three brothers have also gained recognition as artists.
Four works in the exhibition were highly commended, two of them by local artists – Margaret Loy Pula’s Anatye (Bush potato) and Nicky Schonkala’s Interrupted II. The others were Doomboony (Owl) by Shirley Purdie and a video work, Depart without return by Shoufay Derz.

Pictured, top: Yukultji Napangarti. Photo courtesy Papunya Tula Artists. Above: The winning work (detail). The artist’s statement says the lines represent the sandhills surrounding the waterhole and soakage site known as Yunala, as well as the tubers of the silky pear vine, also known as yunala.

Alice Prize: a journey through art of ‘the time we are in’

KIERAN FINNANE takes a walk through the art with Alice Prize judge Nick Mitzevich, director of the Art Gallery of South Australia.

A great way to experience an exhibit is to have a sense of journey and this is what  Araluen curator Stephen Williamson (at right) and his team have achieved with the hang of this year’s Alice Prize, said prize judge Nick Mitzevich (at left), director of the Art Gallery of South Australia.
They had at their disposal a number of works that pointedly call up a feeling of being in a landscape. As you enter the larger of the two galleries, Marina Strocchi’s The east-west line, with its camel train, leads you into the desert heartland. Beyond is Kath Fries’ Scorch, its bronzed twigs and branchlets evoking with simplicity the stripped down landscape after fire has moved through, its earthy monochrome picking up on Strocchi’s. Behind you is Jenny Taylor’s smokey triptych in oils, Fire front, September 2011 and ahead, the cool soothing digital print by Josephine Starrs and Lien Cmielewski, A living body, a more abstracted approach to landscape with an aerial perspective.
Your journey then transitions beautifully to the work Mr Mitzevitch describes as “fabulous” and “simply the best thing in the room”, Yukultji Napangarti’s untitled prize winner.
In the middle of this space is the small figure, The war in battles unwinds in riddles, by Matt Burgess. Its grassy green picks up on the green in A living body and generally on the feeling of being in a landscape. Its humanity and  reflective pose invites identification – it’s as if you are that figure, allowing the natural world called up all around to wash over you.
“It’s the key that unlocks the journey for your eye,” said Mr Mitzevitch.
Then it’s the role of the individual work to “take over, to compel or repel you”, depending on the strategy the artist has used. Napangarti’s work “seduces”, he said, while alongside it, in keeping with the dynamism of the hang, is Alan Jones’ Mum 1980, a “really interesting work” which does the reverse – “it kind of repels you back”.
“There are lots of devices that artists use and they are beautifully orchestrated in the two rooms that make up the Alice Prize.” 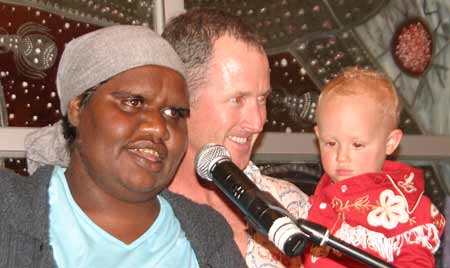 Left: Yukultji Napangati’s daughter Lisa says a few words on her mother’s behalf after the announcement of the prize. Behind her is a delighted Paul Sweeney, manager of Papunya Tula Artists for whom Napangati paints.

Mr Mitzevitch also commended the Alice Springs Art Foundation for their preparedness to include video works, of which there are four, among them the “extraordinary, incredibly seductive and contemplative” Depart without return by Shoufay Derz. Here, pale silk moths flutter above an indigo face whose eyes and lips slowly move in a kind of visual echo of the moth wings. This was one of Mr Mitzevitch’s four highly commended works in the prize.
“It’s lovely to see video works. You don’t usually see them in prizes because they’re hard to install. I commend the foundation for their ability to cope with the onerous demands of moving image works. It’s a testament to the prize being open and liberal, a great illustration of its dynamic nature.” 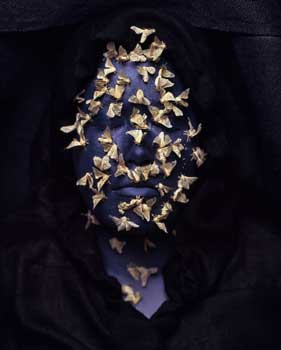 Derz’s video (still, at right) is also among a significant group of works in the exhibition that convey a “sense of fragility of the world we live in”.  Although not in his highly commended final four, a work in this vein that stood out for Mr Mitzevitch is Janine McIntosh’s Terra Australia, a “beautiful and captivating” assemblage of Eucalyptus rugosa leaves, like a great mandala with a rusted circular saw blade in the centre, its serrations echoed in the serrated edges of the leaves that have been eaten away by insects.
“There has been a notion that contemporary art can’t be beautiful, but this is very beautifully executed.”
Again he appreciated how this work had been placed in the room, one of three large works, each very different but  linked by the emblematic force of their central circular form.

Formal qualities and finesse of execution seem to have guided his choice of the further highly commended works, with two of them also sharing with Napangarti’s winner a mesmerising effect.
Nicky Schonkala’s handwoven Interrupted II (at left) he described as an “extraordinarily skilled technical work”.
Schonkala, who lives in Alice Springs, is a previous Alice Prize winner (jointly with Tony Coleing in 2004). Mr Mitzevitch hadn’t seen her work before but was captivated by its rigorous composition, pattern and rhythm.
“She is obviously a great textile artist. She takes a traditional form, pushing and pulling to give it a very contemporary approach.”
His further high commendation of Margaret Loy Pula’s Anatye (Bush potato) would seem to suggest a predilection for formal works, but no: “I usually like really grungy things,” he said, “but these are the best things in the room, you use what you see.”
Pula was taught to paint by her mother, the highly regarded Kathleen Petyarre. Last year she won the Sunshine Coast Art Prize as well as the Paddington Prize and this year she was a finalist in the Wynne Prize.
Her work (below right) in the Alice Prize is a “much more structured work about landscape,” said Mr Mitzevitch, “a little stiffer than Yukultji’s, which is very fluid”.
“It embodies notions of landscape again with a very interesting perspective. The criss-crossing elements build the formal grid. The marks of the dots on the surface are less formal but give you this great sense of dimension through the picture plane.” 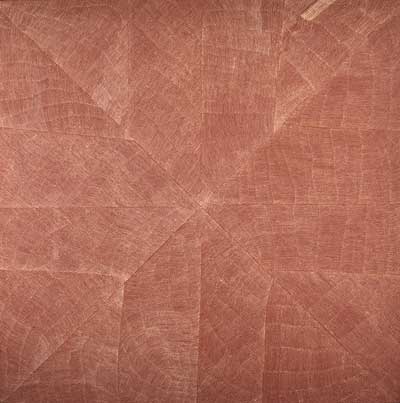 The last of the top four, all of them in the second gallery, is Shirley Purdie’s Doomboony (Owl) (below left). Purdie is from Warmun in the remote East Kimberley. She won the Blake Prize for Religious Art in 2006 and in 2008 was highly commended in the NATSIAAs.
“The form of the timber still there and within it is this wonderful stylised owl. The play of the positive and negative spaces is really sophisticated.”
Mr Mitzevitch was again taken with the hang in the second room: “The connections are made through subject matter, palette, textures. There’s a sense of thoughtfulness about this display that is lovely to walk into.
“The best way to look at art is to just come in, open your mind to things, have a point of view. The great thing at an art prize is that everyone has an opinion. You may not agree with the judge, but you can always voice your own opinion. My opinion is formed from all the things that I’ve seen in my life and all the things I’ve read and learnt. As a gallery professional the most important thing is looking at art, meeting artists and talking to them. You’re then led to the most innovative and seductive.”
The Alice Prize, which began in 1970, was at the vanguard, along with the Caltex/Northern Territory Art Award, in hanging Aboriginal art alongside other contemporary art. In 1983 the prize for the first time went to an Aboriginal artist, 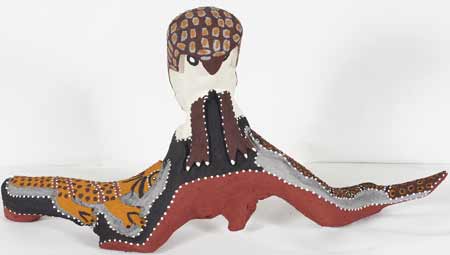 Clifford Possum for his Mulga Seed Dreaming, though this was more than 10 years after Karpa Jamajimba (Kaapa Tjampitjinpa) had won, in 1971, the NT Art Award.
While today no-one is surprised to see Aboriginal work in any contemporary art context, Mr  Mitzevitch said there is a notably higher indigenous content in the Alice Prize than in other prizes: “There’s obviously a sense of local pride and ownership of this prize when you see so many indigenous works in here.”
It also shows – just as the new hang of the Australian collection in the Art Gallery of South Australia does – that Australian art is “a complicated and multifaceted story”.
“There are so many parallel stories happening at the same time. The experience for the visitor is much richer when you blur the artificial boundaries and you look at the time we are in.”

Below: Mr Mitzevitch announces the prize winner in the foyer of the Araluen Arts centre. Art Foundation president Ruth Elvin is to his left.