Home Issue 19 Grog stats may be useless as they do not include online and...
Issue 19Issue 20Volume 19 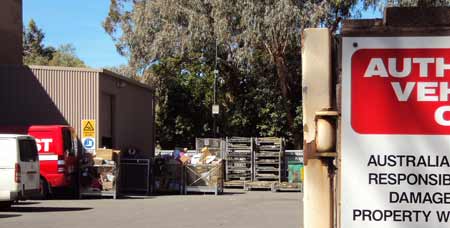 The volatile debate on alcohol reform turns largely on the volume of consumption and how various measures affect it.
Trouble is, the stats are seen to present an incomplete picture as they do not capture the apparently growing online and mail-order purchases that come to the consumer direct from interstate.
Said Deputy Mayor Brendan Heenan during the recent local government election campaign: “There are statistics that less alcohol is being sold now. I don’t believe them. Go to the post office and watch how much alcohol comes in, pallets and pallets of mail orders from south now, tonnes of the stuff, every day.”
The Alice Springs News Online requested information from the NT Justice Department at about noon yesterday. It has not yet been provided. When it comes to hand we will update this report.
Blair McFarland, manager of CAYLUS (Central Australian Youth Link Up Service) which campaigns strongly on substance abuse issues , says so far as he knows, figures about alcohol obtained from interstate by mail order and online are not included in the NT consumption statistics, which – again, so far as he knows – represent wholesale trade in the NT.
Mr McFarland says, relying on figures interstate, the online and mail order proportion is around one percent of the total.
Prominent alcohol activist and medical doctor, John Boffa says: “The short answer is that only some of the sales are included when the wine company or other company is registered in the NT.
“[The government does] not have a way of monitoring all of the internet sales.”
This trade is partly a result of people having a gutful of jumping through hoops to buy their booze and the increasingly unpleasant atmosphere in bottle shops.
The post office will not disclose quantities it handles, which may significantly skew the figures: it is argued a drop in consumption may well not be because the latest initiatives are working but because more people have gone online.
Australia Post  – functionally a grog outlet in this context – is basically refusing to comment although it does keeps tabs on its business with alcohol because it has a requirement to ensure no deliveries to minors are made.
This is the answer the Alice Springs News Online received from a PR person after weeks of enquiries:-
“Wine delivery is an integral part of the service Australia Post provides to our customers.
“Our alcohol delivery procedures include requesting proof of age identification as required to ensure we provide a safe and professional delivery service and meet our legal and community obligations in preventing the delivery of alcohol product to minors.
And: “In terms of requesting proof of age, when delivering a parcel marked as containing alcohol, delivery staff request proof of age if the person at the address looks to be less than 25 years of age.
“If they can’t provide suitable ID the parcel will be taken back to the nearest post office for later collection by someone who can present appropriate ID.
“This requirement is not something that directly correlates to how much alcohol is delivered.”
That seems most improbable: they know what’s in the parcels or else they wouldn’t demand proof of age.
And: “Australia Post is committed to working collaboratively with local, state and federal authorities on the distribution of alcohol to restricted communities and I suggest you would be better placed to contact them in this instance.”
In what way do they collaborate?
“I’m really sorry I can’t assist further but we keep track of parcel volumes (which are commercial in confidence), not what’s inside the parcels.”
Alice Springs is a restricted community (see the blue signs at the entrances to town and the 2km law, for example), but the authorities are not told how much grog the post office handles.
PHOTO: The yard of the Alice Springs post office which, some claim, transports large quantities of alcohol not accounted for in NT consumption statistics.

UPDATE May 10, 12:40pm: The NT Department of Justice has now provided a partial response to our questions.
They were: Does the department have figures of alcohol obtained via mail order or online, and delivered via Post Australia?
If you do please supply them to me.
Are mail order or online purchases of alcohol from interstate and delivered to the buyer direct captured in the NTG stats made public?
Answer: DoJ is aware of small amounts of alcohol being purchased over the Internet.  These amounts are insignificant in comparison to the 2.73 million litres of pure alcohol sold in 2010.
Online retailers can use the Banned Drinkers Register online and since its launch on 26 March, three interstate licensees have adopted the system with the first sale recorded on 8 May 2012.
Follow-up questions to the department: That clearly means that the government does not know the quantities and they are not reflected in the NT alcohol statistics; is that so? How many mail order and online retailers from interstate are supplying the NT?

UPDATE May 10, 4:20pm:
The department replies: Whilst we don’t know specific quantities, from discussions with cartage agents, especially in Alice Springs, quality bottled wine is being purchased in very low quantities in comparison to what is sold in the Territory.
The majority of online liquor sellers don’t sell into the NT.  Coles and Woolworths despatch their online liquor sale products from the NT and so already use the BDR. In developing the BDR online, we wrote to 10 organisations that offer online liquor sales into the Territory – including Coles and Woolworths, letting them know that the BDR was available online.