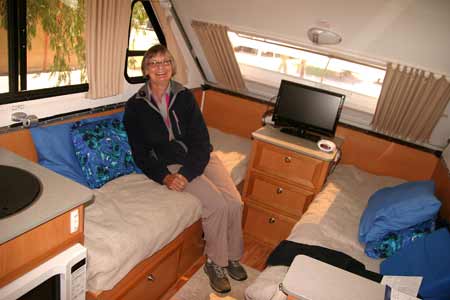 Why an A’van? That’s easy: you can fold it down to half its height in 20 seconds and it won’t cause the fuel-guzzling drag a normal caravan does.
The A’van – starting price $25,000 – is strong. None of the walls are made from canvas.
The triangles on either side fold on top of each-other, and so do the quadrangles front and back, all resting on the bench tops inside for towing.
They are great for two people on a trip of a couple of weeks (although too small for extended living, having no bathroom, for example).
Why these simple advantages spawned a veritable cult – very benign, to be sure – is a bit of a mystery, until you discover the friendly like-mindedness of the owners.
This week 200 of the 1200 trailers belonging to members of the A’van Club of Australia Inc are in Alice Springs for its annual convention.
The club was founded by Joan and Brendon Smith from Yarrambat, north of Melbourne, in 1999, after buying an A’van.
They asked manufacturer Jeff van Baardwyk if there was a A’van club. He said no but, not surprisingly, he liked the idea.
The rest is history.
Mr Smith says the nearly 400 delegates, between them, are traveling three quarters of a million kilometers to attend the convention, and will spend half a million dollars in town for petrol, food and caravan park site fees during their stay of no less than a week.
They come from all over Australia to attend this no-rush affair, settled into the MacDonnell Range Caravan Park.
The Smiths are full of praise for the park and its owner, Brendan Heenan.
He won hearts both as the Sunday morning pancake cook (he moved forward this free-of-charge event so some people could attend a church service), as well as the Deputy Mayor, welcoming the convention delegates together with Mayor Damien Ryan.
Mr Smith says they emphasized the town’s efforts in dealing with law and order issues, such as the Clontarf Foundation’s inroads on poor school results and attendance.

The business of the convention is strictly low pressure: election of officers, discussing the highlights of the year, thanking the presidents of the 13 sub-groups which are planning the many gatherings around the country, future outings, and so on.
“We’re a very caring group,” say the Smiths.
Mostly retirees, they assist each other in the event of illness or other problems.
Some people are so attached to the group that they flew to Alice for the gathering because they didn’t have time to do the long road trip.
There is plenty of time to “do” the tourist attractions in and near town.
Some 200 attended the Anzac dawn service and 20 marched.
But – a sign of the times, perhaps – the caravan park puts on lots of night-time entertainment, with the new “shed” available for when the weather doesn’t favour outdoor fun: a bush dance (hopefully with Ted Egan), a card night, a flora and fauna show, star gazing, a wine and cheese night on the hill, a jam session and an evening featuring digeridoo playing and music by Barry Skipsey.
“There is so much to do,” says Mrs Smith.
Organised daytime fun includes a heritage walk and bike rides in town, and a street breakfast in the tourist park itself.
The camaraderie extends well beyond the destination: on the trip up and down A’vanners casually get together, half a dozen vans, share a camping ground, sometimes just by the roadside, and “enjoy happy hours,” as the Smiths put it.
They praise the bitumen road to The Centre, the camping grounds, and are amazed by the green landscape after the record rains.
Exception: The flies are really bad right now between Port Augusta and Coober Pedy.
Photos: Like Doctor Who’s telephone box – it’s so much bigger inside: June Hicks in her A’van in Alice today, at the MacDonnell Range Caravan Park. Chilling outdoors in The Alice after  couple of days of rain.