Build a house for 15% of the going rate 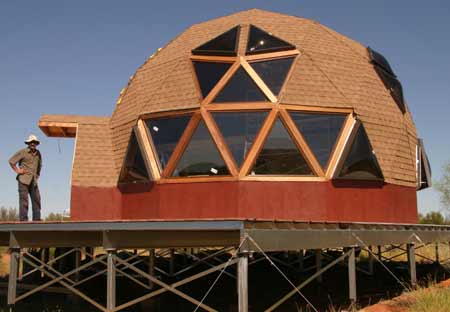 Twelve years ago, after an international career in show business, three brothers from Melbourne came to Alice Springs with a dream about sustainable living and the determination to make it come true.
Today Ben, 39, Dan, 37 and Tom Falzon, 36, with the hands-on help of their dad Joey, are a long way down that journey – which isn’t meant to have an end.
Their 40 hectare lease on a low hill of airport land at the end of Colonel Rose Drive has the grand name of Earth Sanctuary but its achievements are very much down to earth.
With solar cells and wind turbines, the brothers generate more power than they use.
They are connected to mains water but use it very sparingly, mostly relying on every drop of rain that falls onto the roofs their house, sheds and shelters, and collected in tanks with a combined capacity of 75,000 liters.
And they are building houses with linked together, Pine Gap style geodesic domes for just 15% of the cost of conventional homes.
And all that is put before up to 2000 school kids a year, from Alice Springs and around the nation, and several hundred “dinner and show” guests, mostly under a contract with AAT Kings.
Over the years, local schools have created budgets for visits to the sanctuary, but amazingly, more school groups come all the way from NSW and Victoria.
The brothers supplement this income with outside jobs that, too, are all about people.
Now they mostly work as paramedics with the St John Ambulance: the trauma they have to deal with every day contributes every bit as much to their understanding of the town as did being tour guides in earlier years, between them doing “thousands of trips to The Rock”.
They also worked as bouncers, but far from putting on a sullen gorilla act, the brothers would welcome patrons with a beaming smile, dazzle them with their good looks, shake them all by the hand and wish them a great evening.
How do you deal with the “issues” of Alice Springs? “You treat everybody like a person.”
The brothers’ approach to their mission is methodical, proceeding in six categories: Energy, water, shelter, food, utilities and well-being.
The bottom line is: Anyone should be able to use the systems and gadgets the brothers are promoting, creating, inventing, developing.
Their personal requirements and those of the tourism and education businesses need as much electricity as two “standard households”.
They started with a stand-alone photo-voltaic plant with batteries and back-up diesel generator.
As demand grew, the better option was to hook into the town grid: it supplies power at periods of high demand, such as functions or dinners for the groups, usually around 50 people, for a few hours at a time.
But during the rest of the time the solar plant generating 10.5 KW, and the wind turbines put power in excess of need back into the grid, always resulting in a credit from Power and Water.
The bang for buck calculations are interesting: the six wind turbines worth together $12,000, and the original stand-alone system, worth around $20,000, generate as much power as their new big solar plant which cost $65,000.
On the water ‘front’, given that they don’t have a bore and are not connected to the town’s supply, being frugal is the order of the day.
The dunnies are either the non-flush composting type or low-flow flush ones.
The complex doesn’t have any non-native gardens and lawns which elsewhere in town absorb about half of the water consumed.
The domes are a marvel of simplicity, inspired by the shape of the tipis of the American Indians, the eskimos’ igloos and the Germans’ VW beetle.
Their strength – they can withstand winds of up to 250 kmph – lies in their shape and the interlocked triangles of quite light steel or timber.
Triangles made from 0.75mm galvanised steel sheets sandwiching insulation material are then inserted into the dome’s skeleton, forming the inner and outer cladding. Some of the triangles are filled with glass.
The first big display home consisting of domes linked together sits on a platform on stilts. This enables the easy installation of piping and cabling underneath. No slab, no digging.
It is almost entirely built of steel.
On the southern side of the complex stands an impressive dome made almost entirely of wood, nine meters high, a two-storey construction, with double-glazed windows. 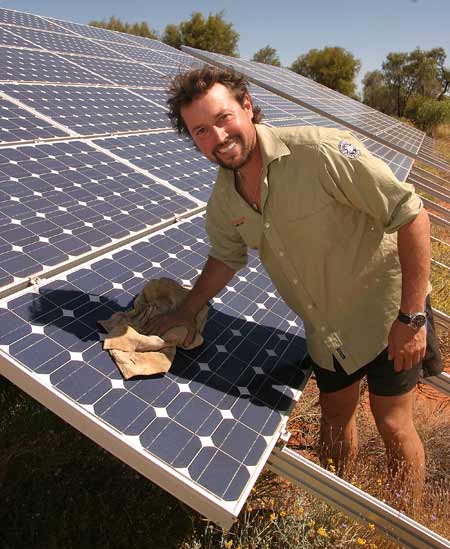 This $90,000 display home, nicknamed Desert Igloo, was bought from a long established firm in the USA, Timberline, imported to compare the two modes of construction and their relative suitability to the Central Australian conditions.
The electrical system of this dome is self-sustained, running on 12 volts throughout and powered by the sun.
The brothers grow cabbage, tomatoes, pumpkins and potatoes but the delicacies come with the land: quandongs, bush plums, native passion fruit, wattle seed and other bush foods.
Being frugal has many aspects to it: It ranges from using laptops not chewing up stand-by power, to running small vehicles and bikes.
But the brothers share more with their guests than their knowledge of self-sufficiency.
The talks range across much that’s good in The Alice, its unpolluted atmosphere, ancient Aboriginal culture, wonderful landscapes, “great people doing great things”.
But the brothers’ familiarity, through their outside jobs, with the town’s woes is getting equal time: “That’s the way it is. Keep your eyes open, a smile on your face, it’ll get you through the day.
“It’s all part of that great outback mix.”
What about that category six, “well-being”?
That’s what it’s all about: applying your own “total health of mind, body and spirit” to the state of the planet.
“Get up in the morning and make a difference.”
The sanctuary isn’t a fly-in, fly-out venture for the Falzons. They and their partners are here to stay.
Their mum is a teacher in Melbourne but a frequent visitor to the sanctuary.
Tom’s is married to Anna who moved here from Hastings, Victoria.
Ben’s long-time partner Michelle is also a paramedic with St John Ambulance. And this Saturday Dan is getting married to local girl Alana Naismith.
Photos (from top): Dan with wind turbines. The two story timber dome. Tom giving the photo voltaic array dust-off. The metal domes.