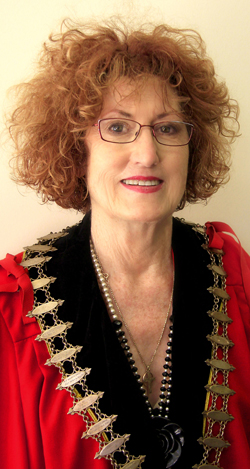 “Port Augusta is alcohol free. You cannot drink in a public square. If you want to drink you go home, to a pub or a club. You will not drink in the streets and you will not sit on the beach and consume alcohol.
“And you will not create havoc and unsocial behaviour. You piss off back to Alice Springs to the Todd River. That’s where you go because in Port Augusta, City Council rules and regulations must be complied with.”
What about people who contravene that regulation?
“They are dealt with appropriately, are put on a bus and sent somewhere else.”
Who puts them on the bus?
“Our Safety Officer does.”
And that person plays a very major role in the town.
Nancy Joy Baluch – her friends call her Joy – doesn’t mince words. She has served as the Mayor of Port Augusta from 1981 to 1993 and from 1995 till now. That she’s battling cancer wasn’t at all evident in our telephone conversation yesterday.
“In 1981 we had a town square. It would have drunken whites, drunken blacks, fornicating in public, in the presence of tourist buses,” she says.
“It was a deplorable situation.
“Tourist buses left Port Augusta. They just by-passsed Port Augusta. Our tourist trade went down to zero.
“Port Augusta became a place not to be seen in.
“Today we are a tourist destination. We have turned our image around.
“For 90 years the town turned its back on the very quiet waterway that was navigated by Matthew Flinders back in 1804.”
Turning to face it, the town became the second largest SA port (Port Adelaide being the largest), exporting wheat and wool and other produce direct to London.
Once a dirty recess, a haven for vagrants and drinkers, the beach is now the town’s playground: “People who lived here some 30 years ago, are just overwhelmed by the transformation.
“We have altered the face of Port Augusta.
“We have dealt with the people who were creating havoc and who were socially unacceptable.”
How did she manage to do that?
“We developed a series of strategies. It was clear to us that not one single initiative would overcome this mounting problem.
Part of that strategy was to develop an alcohol free environment, which included a sobering-up shelter, a mobile assistance program whereby those affected by drugs and alcohol were picked up by the MAPS van, and taken to the sobering up shelter and tended to in a caring environment.
“They are showered, fed, bedded down and next morning the relevant agencies attend to their needs, i.e. taken to hospital or doctors, given counseling, enticing them to embark upon a program to break the cycle of alcohol dependence.
“Funding and administration for this facility is by the three tiers of government.”
Is it compulsory?
“Course it’s not bloody compulsory. Nothing is compulsory today. When they are admitted to the centre they are normally in a filthy condition. They have peed themselves and are a complete bloody mess.”
The town’s transformation didn’t happen over night.
“Everything was a battle, a hill to climb. There are always the do-gooders from outside the community who say they have civil liberties, and you’re contravening their civil liberties, their rights.
“Well bugger them. They’ve got no rights. They are ruining this community and I don’t give a stuff if you are black, white, brindle with yellow spots. If you do not comply with those rules and regulations, you are not welcome in this community.”
But back to the Safety Officer, an employee of the council which funds the position to the tune of $230,000 a year – a small item in the $28m budget.
“The funding of the Safety Officer, the council believes, is a state government responsibility and should be funded from either the law and order or the health budgets. But local government needs to have control of this watchdog position, to keep the state government honest.
The Safety Officer keeps tabs on what government departments and agencies are – or are not – doing, the roles they are not fulfilling.
Mrs Baluch says the Safety Officer is “a person who has opened a Pandora’s Box” establishing, for example, the number of homeless people, and getting agencies on the weekend to work through those issues.
“It is a state government responsibility to deliver these sorts of services.
“We don’t need more money.”
It’s the council which needs to “keep tabs on where the money is spent”.
(She says there is  a need for a Safety Officer also in Aboriginal communities where “a lot of nepotism comes into play – it should not”.
“In Port Augusta we have 30 spoken dialects.
“Some clans despise each other, and fight each other. Families are appointed to a particular area of activity and families take control which excludes other families within the community from accessing services. 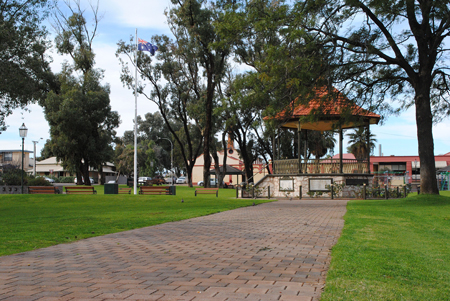 “And until such time that the governments grow balls and address these problems they will continue.”)
As a result of council’s pushing, the town now has a camp, built with state government funding (“it’s not council’s responsibility to fund it”).
Says Mrs Baluch: “The camp was established for people coming into town over the long summer period to access services which in the Pitjantjatjara lands close down over the summer.
“That camp has accommodation that is not overcrowded, is safe, alcohol free. All different types of facilities are there.
“If you want to sleep in a wiltja, next to a campfire, we’ve got it. Motel type accommodation – we’ve go it. Ablution blocks, laundry blocks, a kitchen, two meals a day in the dining room.
“You are charged. It comes out of your welfare payment.
“The facility can be accessed between 6am and midnight.
“And if you’re drunk you don’t get in.
“There is no use coming down to a friend’s place or a relative’s place that has three bedrooms and you’ve got 30 or more people sharing those facilities.”
Mrs Baluch says there is no magic wand to overcome unsocial behaviour.
“It’s been allowed to manifest by the three tiers of government over a long period of time.
“We have overcome these problems by working together with government departments and with the community.
“You’ve got to sit around a table and work through their differences.
“We have come a long way over the last 10 years.”
Mrs Baluch says the key was to bring to the table, in monthly meetings, the state and federally funded services, 15 or more agencies, supplying chairmen in turn, and make them “deliver their services in an appropriate way … working harmoniously.
“They are wasting money. It doesn’t filter down to the people in the marketplace, it’s wasted on trivia, on people who run around in 4WDs, flat out justifying their positions.
“By that I mean that social workers, workers in government departments knock off at 3 o’clock on a Friday, turn their backs on the problems and come back on a Monday morning to see that all hell has broken loose.
“I have still not been able to convince government departments to have their weekends in the middle of the week, in particularly in relation to social workers and others delivering important services.”
She leaves no doubt about her view of  “people in authority who get a bloody pay packet every Friday and don’t give a stuff about our case.”
If she has a soft spot for Alice Springs and the NT generally she hides it carefully.
She is outraged about visits over the years from Alice, Tennant Creek and Katherine elected members, local and NT Government, including former Alice Mayor Fran Kilgariff.
“You could have been on top of these problems if the people with decision making power who wasted my time and energy nine years ago had been doing their job.
“I don’t give a stuff what happens in Alice Springs today because you’ve got nobody with balls and guts to go out on a limb like I did.
“They went back all fired up. It was their intention to go back to government authorities and departments to work together.
“Unfortunately, that never occurred. 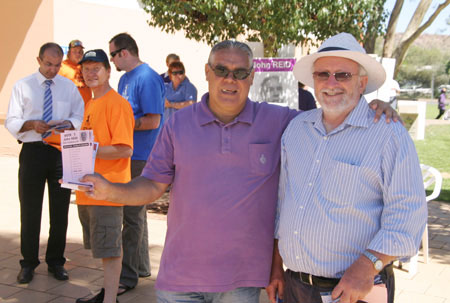 “It went back to the bureaucracy. And it shouldn’t.
“I have wasted umpteen hours over the last 30 years talking to people in authority in the Northern Territory who go away with fire in their belly.
“But they don’t listen. They’ve got no guts and no balls.”
What about collaboration with the police?
“You have to get it. They wax and wane. It all depends on the bloody superintendent. They are all dictated to by a central position [in the capital]. That was just as big a battle to get the collaboration of the police.”
How did she get it?
“Be nasty, tell them the truth. And I don’t give a stuff what they say about me. I can sleep at night.”
She says: “I’m about to set up a meeting with the newly appointed superintendent who I believe does not have his fingers on the pulse.”
Mrs Baluch has for decades been a target for national media.
“I suffered physically and if it were not for the Lord Jesus Christ I would have been dead a long time ago.
“I’ve put up with a lot of criticism since 1985, since I tried to introduce dry areas into Port Augusta.
“I’ve been subjected to a lot of personal criticism. Another person would not have stood the pressure.
“I know I was on the right path because I was put on this path by God.
“We now have the young Aboriginal people involved. We cannot allow them to be burned out as we have been.
“We won’t allow that to happen. We now have the three tiers of government sitting together, but the local community has to be in control. It’s all about controlling that great bucket of money.
“Why should we go on for the next 40 years to see it wasted. It’s about honesty and transparency, and someone with balls to initiate it.
“Whether the Mayor has boobs or balls, she or he is still the Mayor. Some people say I have both.
“It is my aim to leave my role having brought harmony to the streets of Port Augusta, making it a role model for the rest of Australia, where the two cultures live and work together harmoniously.”
PHOTOS, from top:  Once a dirty recess, a haven for vagrants and drinkers, the beach and foreshore are now the town’s playground. • Mayor Baluch. • Gladstone Place, once a venue for fighting and fornication, one one of the town’s many beauty sport. Photos courtesy Port Augusta City Council (the Mayor) and The Transcontinental Port Augusta (aerial shot and park).• Alice Springs councillor  candidate John Reid, with supporter Bob Durnan, at the civic centre polling booth last Saturday. It was Mr Reid’s campaign, with its references to the Port Augusta model, that sparked our interest to do this story.

Feds and Rovers in fourth clash

Mark by mark, finding his way

By ERWIN CHLANDA Land prices in Alice Springs, and other NT towns, may be heading for a slump as supply grows in the wake of...
Read more